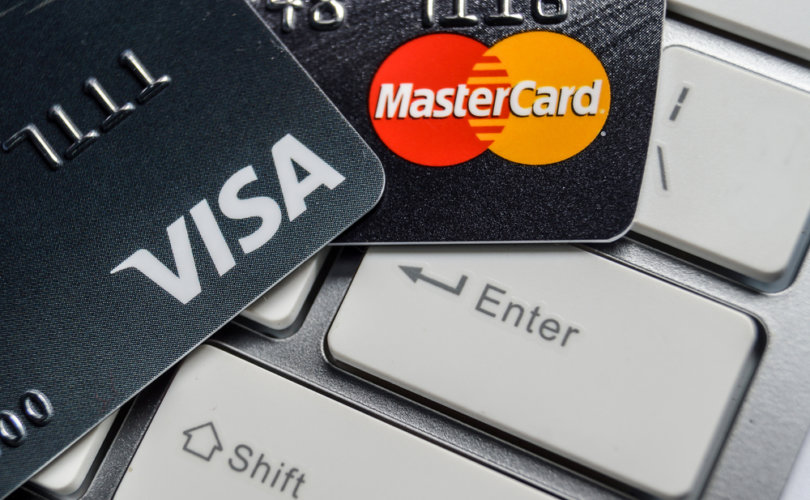 Led by prominent conservative author and speaker David Horowitz, the Freedom Center is dedicated to combating the “efforts of the radical left and its Islamist allies to destroy American values and disarm this country” through a wide variety of websites, publications, resources, and events.

In an email this week, Horowitz accused Visa and Mastercard of cutting off any credit card donations to the Freedom Center, Breitbart reports. “Now we can’t process donations from any major credit card companies,” he wrote, blaming the left-wing Southern Poverty Law Center (SPLC) for pressuring the companies.

“This blow could be the end of the Freedom Center,” he warned. “Decades of work, down the drain because the hateful Left wants to squash free speech and silence an organization that dares to question them.”

“The reason Mastercard and Visa gave us for cutting us off and thus sabotaging our online fund-raising operation is that the SPLC told them that we were a hate group,” Horowitz subsequently told Breitbart. He cautioned conservatives not to see businesses with a “vested interest in keeping their platforms politically neutral” as the culprits, but rather a “Soros funded Media Matters and Southern Poverty Law Center operation,” as well as threats to tech companies “by Senator Mark Warner and other Democrats if they don’t censor conservatives.

“The fact that Mastercard and Visa are now part of this juggernaut indicates how dangerous this has become,” he said.

Visa followed up with a statement to Breitbart denying any knowledge or involvement in blacklisting the Freedom Center, while Mastercard did not yet respond.

SPLC is a notorious left-wing organization with a long history of labeling mainstream conservative and Christian organizations “hateful,” and attempting to get them blacklisted from various online platforms and services. Despite being forced to make a public apology in June and pay $3.4 million in defamation damages to Maajid Nawaz’s Quilliam Foundation, various ostensibly neutral companies continue to listen to SPLC’s recommendations.

Most recently, SPLC was reportedly responsible for getting prominent Islam scholar Robert Spencer (whose website Jihad Watch is affiliated with the Freedom Center) barred from the fundraising platforms Patreon and GoFundMe, on similar pretenses of peddling “hate.” Patreon blamed Mastercard for requiring their decision, and The Daily Beast reported that Mastercard had consulted the Southern Poverty Law Center (SPLC) about Spencer under pressure from the left-wing group Color of Change.

Between a series of examples, reports, and a Media Matters memo detailing a comprehensive campaign to pressure social media companies into silencing conservatives, many center-right voices are convinced that political discrimination across Facebook, Twitter, YouTube, payment processors, and more represents a grave threat to free speech.

“Want to raise money for a conservative cause online? Sorry, Patreon and GoFundMe won’t let you,” Breitbart technology expert Allum Bokhari argued earlier this month, making the case that only government intervention of some kind can resolve the crisis. “Want to build a free-speech friendly alternative to Patreon and GoFundMe? Sorry, PayPal and Stripe won’t process your customers’ payments. Want to build a competitor to PayPal and Stripe? You still need Visa and MasterCard to play ball.”

Conservatives remain divided on a solution, citing the competing goods of open expression and private companies’ freedom of association. Some have suggested that Congress could act consistently with both by repealing social media companies’ immunity from liability for content they allow on their platforms, which is predicated on platforms being truly neutral and open, rather than exercising editorial judgment over content.

In USA Today Wednesday, former Bush administration Defense Department assistant James Robbins wrote that while government should not “control the information flow,” the White House “could ban these firms from government contracts until they clean up their act” and the Justice Department “could consider instigating antitrust actions.”