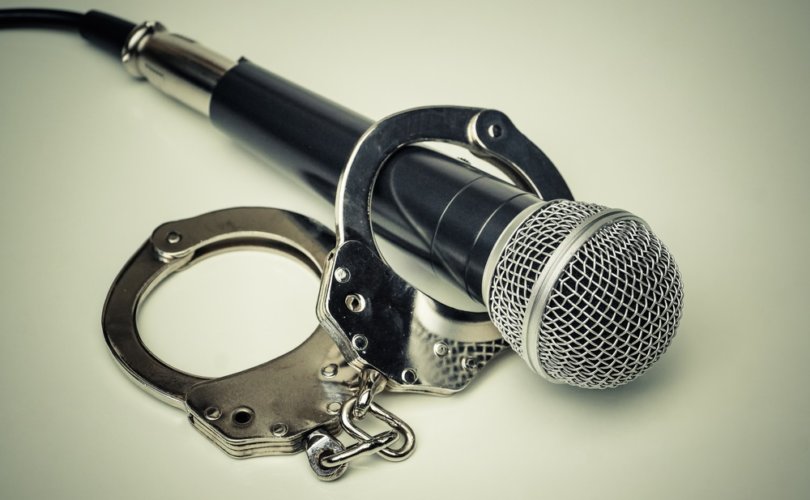 CLARKS SUMMIT,  Pennsylvania, July 7, 2020 (LifeSiteNews) ― The founder of a social messaging website dedicated to freedom of speech says a credit card company has made it impossible for him or his wife to take credit card payments.

Andrew Torba, the founder of Gab, an alternative to Twitter, told LifeSiteNews that this is not the first time he has faced “targeted persecution” and “industry blacklisting.”

“Our app is banned by both Apple and Google,” Torba said via email.

Torba published an article in late June alleging that Visa had blacklisted not only his company, but him and his wife.

“We were told this week that not only is Gab blacklisted by Visa as a business, but my personal name, phone number, address, and more are all also blacklisted by Visa. If I wanted to leave Gab tomorrow (something that isn’t going to happen) and start a lemonade stand I wouldn’t be able to obtain merchant processing for it,” he wrote.

Torba added that if his wife wanted to start a business, she wouldn't be able to obtain merchant processing because she lives at Torba’s address and therefore “would be flagged by Visa.”

The entrepreneur told LifeSiteNews on Friday that he “can’t share much more detail” because he and his wife are seeking legal advice. He underscored that his company defends all political speech as protected by the First Amendment of the American Constitution.

“We aim to conserve those rights online and to export the freedom of speech to billions of people around the world who do not have the legal blessing that is the first amendment,” he wrote.

“We also have common-sense rules: no illegal activity, no threats of violence, no sharing someone else's personal information, and no pornography.”

Torba describes himself on his Gab profile as “a Christian, a husband, a father, a proud American, and the CEO of @gab,” including the scriptural verse “Now faith is the substance of things hoped for, the evidence of things not seen. Hebrews 11:1.”

The sentiments on Gab, however, are often contrary to Christianity. Users take advantage of Torba’s free-speech philosophy to post racist, anti-Semitic, and pro-fascist messages. One recent post introduced with a racial slur a shocking video of a black woman shooting a black man in the head. (The man, Devyn Holmes of Houston, survived.) Another encourages white women to have sexual relations only with black men. Another recent post is by a woman hoping to join a White Nationalist chat group.

At the same time, Gab provides chat groups for people interested in Catholicism, rural issues, homeschooling, and breaking news among other themes.

Gab also protects sensitive viewers to a certain extent: the shooting of Devyn Holmes by Cassandra Damper was hidden under the warning “The following media includes potentially sensitive content.”  Torba was also criticized by a Gab user for removing “NatSoc” (National Socialist — i.e., Nazi) groups from his website.

“Torba cries about cencorship [sic] yet does it himself,” said the user, a Hitler fan calling himself AddictedtoRedPills.

“We take action against groups and users who repeatedly violate our community guidelines,” Torba explained.

“We enforce these guidelines equally regardless of political affiliation,” he continued. “While we don’t comment on individual cases, threats of violence and other illegal activity are not protected by the First Amendment and therefore not protected on Gab.”

The entrepreneur flagged a different totalitarian regime when he described Visa’s interference with his ability to do business: the People’s Republic of China.

“In China there is something called the Social Credit System, which was developed by the Communist Chinese Party as a ‘national reputation system,’” Torba wrote.

“To most Americans, this sounds horrifying, and it is. I now know from first-hand experience because this social credit system exists in the United States.”

Torba added that although the U.S. government doesn’t endorse this system, it is used by American corporations “who today have in many ways more power, data, and control over our lives than our government does.”

“Many of these corporations also happen to be endorsing and raising money for communist organizations, revolutionaries, and the domestic terrorists burning down our cities,” he alleged.

Torba stressed that Gab does not violate the law. A statement for the company said it tries to appeal to people of all backgrounds and does not endorse hate speech.

“From its inception, Gab has been committed to appealing to people of all races, backgrounds and political persuasions who support the free flow of information,” the company wrote. “… Anyone is welcome to express themselves on Gab.”

“Of course Gab does not advocate hate speech. In fact, Gab terms state that it ‘treats all people with respect and dignity, regardless of their background, origins and point of view,’” it continued.

“But while Gab prohibits rhetoric that advocates violence or illegal activity and allows users to block hateful speech, Gab does not forbid any speech based solely on viewpoint.”

Torba alleges that Visa is taking extraordinary measures to interfere with Gab’s ability to take payment for its clothing merchandise and subscriptions to extra features on the website.

“We were told that Visa has someone camping on our website watching our payment processing,” the founder wrote.

“As soon as we get a new processor up they find out who it is on their end and contact them. They tell the processor that Gab is flagged for ‘illegal activity’ and if they do not stop processing payments for us they will be heavily fined,” he wrote.

“When the processor inquires about this alleged ‘illegal activity,” Visa tells them that Gab has been flagged for ‘hate speech.’”

However, hate speech is not a crime in the USA, and all opinions are protected by the First Amendment, Torba asserted. He doesn’t recognize “hate speech” as a defined concept.

“Visa doesn’t agree with me,” he stated.

Torba expressed worry that Christians will suffer if something is not done to stop this form of corporate harassment.

“The Communist revolutionaries taking over the United States are coming for us all,” he wrote.

“It’s only a matter of time before the Bible is labeled as ‘hate speech’ and churches start to experience what I am going through right now.”

LifeSiteNews reached out to Visa for a statement but has not yet received a reply.

To make your views on the corporate attack on free speech respectfully known to the Department of Justice, please contact: