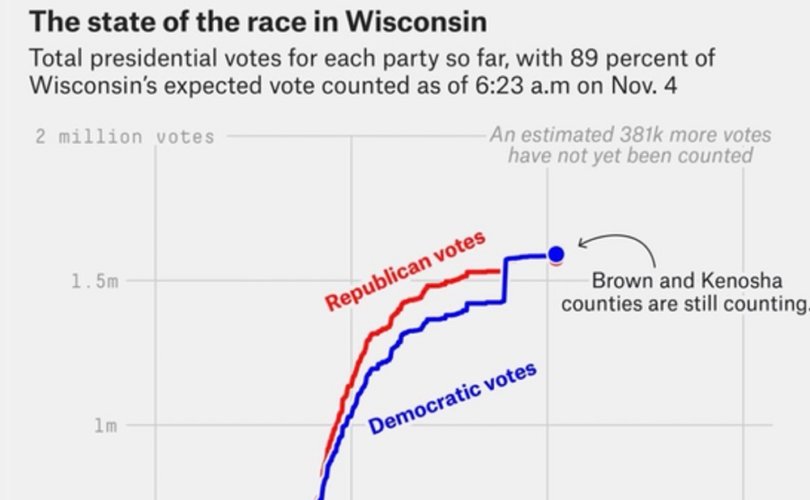 November 4, 2020 (LifeSiteNews) – In the wake of what may turn out to be one of the most contested presidential elections in history, warnings about alleged vote fraud against the reelection of President Donald Trump, in favor of Joe Biden, continue to surface in several states.

The 45th president did not fail to take notice either around 2:30 AM this morning, or at 9:04 AM tweeting “Last night I was leading, often solidly, in many key States, in almost all instances Democrat run & controlled. Then, one by one, they started to magically disappear as surprise ballot dumps were counted. VERY STRANGE, and the “pollsters” got it completely & historically wrong!”

Twitter responded by implementing their 2-day-old policy of censoring “candidates” who “claim an election win before it is authoritatively called.” These tweets from the President of the United States are now hidden behind a warning proposing that they contain information which “is disputed and might be misleading about an election or other civic process.”

However, reports of alleged voter fraud are coming to the surface. Conservative columnist Matt Mackowiak observed a sudden influx of over 128,000 votes for Joe Biden in the Michigan tallies. He tweeted, “An update gives Biden 100% of new votes—128K+” with screenshot images supporting his claim. It turns out, however, that there was an error in the system that was corrected and Mackowiak retracted his tweet.

FYI. The tweeter has retracted his tweet and it appears this has been debunked. https://t.co/UrlVnyXO3L

Other Twitter users pointed out the sudden early morning jump of votes for Biden in Wisconsin.

One commentator observed, “So Wisconsin discovered over 120,000 ballots between 3:30 and 4:30 in the morning. In just one hour. You’re telling me that while Trump was ahead they managed to find 120,000 votes, giving Biden the lead. This is outright corruption.”

Another Tweet from “The Red-Headed libertarian,” noticed the same problem: “At 4:30am, At 94% reporting Trump was safely up 109k in WI, as he had held all night. By 4:44am, at 95% reporting, Biden suddenly had 137k votes infused, passing Trump and flipping WI blue.”

By 4:44am, at 95% reporting, Biden suddenly had 137k votes infused, passing Trump and flipping WI blue.

Other questions have been raised regarding an alleged very high voter turnout in the Dairy State. Twitter commentator Tom Wilkes offered the following question in response to an observation by President Trump. Wilkes asked: “Wisconsin had a 93.2010729337% Turnout. Is this possible? Total Registered voters 3,684,726 Total Voted 3,296,836(97%) Twitter. I am only stating facts so please do not ban me.#2020Elections # MAGA”.

The discrepancy, however, could be explained by the fact that Wisconsin allowed voters to register at the polls on election day and the official registered voters list would not have been able to be updated with the number of voters newly registered on Nov. 4.

With regards to the Biden campaign, due perhaps to a gaffe or maybe a Freudian slip, GOP National Spokesperson Elizabeth Harrington recalled in the tweet below how Joe Biden recently “bragged about having “the most extensive and inclusive voter fraud organization in the history of American politics.”

2 weeks ago Joe Biden bragged about having “the most extensive and inclusive voter fraud organization in the history of American politics”pic.twitter.com/FTGpfcJV4A

Finally, in further developments, according to reports, the National Guard has been deployed to two Wisconsin counties over cases of “misprinted ballots” to ensure peaceful counting.

“Poll workers in Wisconsin's Outagamie and Calumet Counties will transfer votes from at least 13,500 misprinted absentee ballots to ‘clean ballots,’” The Blaze reports.

Fox News stated that these ballots “cannot be fed into electronic tabulating machines” and thus, the Wisconsin Supreme Court instructed these counties to “use the statutorily prescribed method of ballot duplication for counting ballots of this nature.”

In 2016, both of these counties voted to elect Donald Trump President of the United States. The deadline for having these ballots counted is 4:00 p.m. CST on Wednesday, November 4th.