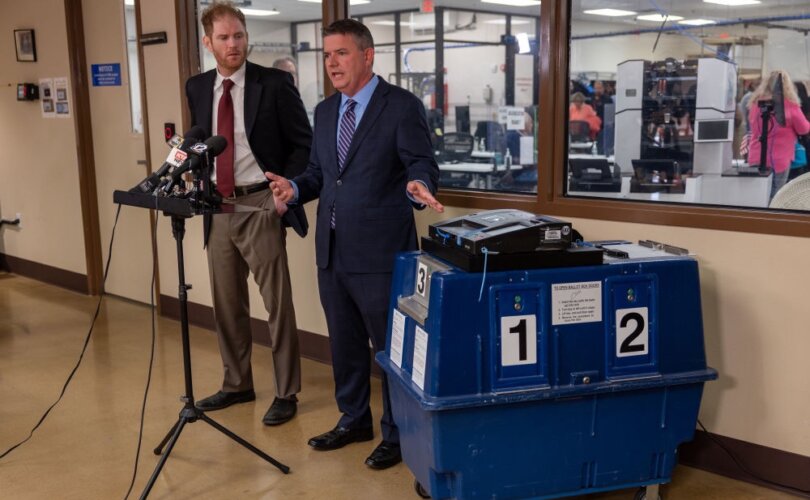 Bill Gates, Chairman of the Maricopa Board of Supervisors, speaks about voting machine malfunctions at the Maricopa County Tabulation and Election Center on November 08, 2022 in Phoenix, Arizona. Photo by John Moore/Getty Images

(LifeSiteNews) — Troubling reports of voting machine snafus in counties from Arizona to New Jersey on Tuesday have sparked election integrity anxieties for conservative voters. The worries come amid insistence from top Democrats and the legacy media that the results of many elections won’t be known until long after Election Day, a prediction conservatives argue is merely a coverup for planned election rigging.

Just hours after the polls opened on Tuesday, reports emerged that a large percentage of tabulating machines in beleaguered Maricopa County, Arizona were experiencing errors that prevented voters from submitting their ballots. Maricopa County was the site of numerous election fraud complaints from conservatives after the 2020 presidential election, triggering a forensic audit that flagged tens of thousands of irregularities and errors.

The chairman of the Maricopa County Board of Supervisors told Fox News on Tuesday the county was experiencing “some hiccups with about 20% of these tabulators,” but stressed that Arizona voters will have their ballots counted if they place them in a box to be counted later by election officials.

In a video shared to social media by Turning Point USA founder Charlie Kirk, an election worker can be seen telling Arizona voters that one tabulating machine is “not working” and the other is misreading approximately 25% of ballots.

Trump-endorsed Arizona Republican gubernatorial candidate Kari Lake said on Twitter she has been “getting flooded with calls and text messages from people who are having trouble voting all over Maricopa County.”

“THIS is why we must reform our elections,” she said.

Lawyer Harmeet K. Dhillon, founder of the conservative legal group Center for American Liberty, sought to assure voters that their ballots will be counted despite the glitches and errors.

“Arizona voters — please be aware that there are dozens of Republican lawyers monitoring the tabulating situation in Maricopa County (and all AZ Counties), speaking with the county lawyers, and ensuring that votes WILL count,” she said. “Please do your part and VOTE! We have your back!”

Arizona voters — please be aware that there are dozens of Republican lawyers monitoring the tabulating situation in Maricopa County (and all AZ Counties), speaking with the county lawyers, and ensuring that votes WILL count. Please do your part and VOTE! We have your back! 🗳🇺🇸

All voting machines were reported to have gone down in New Jersey’s Mercer County, causing officials to direct voters to submit a standard ballot instead.

In a statement, Mercer County officials said that poll workers would “be on hand to walk voters through the process,” and that the Board of Elections “is working with Dominion, the machine maker, to resolve the issue.”

Dominion has become a familiar name for those worried about election integrity in the 2020 presidential election. Shortly after the election, a team of cybersecurity analysts released the results from a forensic audit of Dominion Voting Systems machines in Michigan’s Antrim County, detailing what they called widespread, deliberate software errors. Top state officials have contested the analysts’ findings, and Dominion has filed lawsuits alleging that doubts raised about their machines in the aftermath of the election amounted to defamation.

Meanwhile, Maricopa and Mercer Counties aren’t the only ones triggering concern among voters.

In Luzerne County, Pennsylvania, a judge on Tuesday ordered an extension of voting hours after numerous locations reportedly ran out of paper for their voting machines.

The Hill reported that Luzerne County Court of Common Pleas judge Lesa S. Gelb on Tuesday issued an emergency court order extending voting from 8 p.m. to 10 p.m. since voters, according to her order, “through no fault of their own, were disenfranchised and denied the fundamental right to vote.”

Reports Tuesday also noted that thanks to a last-minute change, Philadelphia will take longer than originally stated to count its ballots, planning to add up tens of thousands of mail-in ballots in the week after Election Day.

In Illinois, CBS reported that some Chicago voters could be “partially out of luck” after they were accidentally given a partial ballot thanks to a “mistake by election judges.”

Commentators and politicians are urging voters concerned about vote fraud to stay in line regardless of machine breakdowns or other problems.

TRUMP TO ARIZONA VOTERS: “Don’t leave your line. Stay where you are. They say that the machines aren’t working. They say that they’re running out of paper. […] It’s very, very unfair what’s going on.” pic.twitter.com/bevAzkBjHy

Former U.S. President Donald Trump, who has argued that widespread voter fraud in the 2020 presidential election unfairly tilted the election to Joe Biden, took to his social media platform Truth Social on Tuesday to raise the alarm over the reported voting errors occurring in Arizona, Pennsylvania, and Detroit.

On Monday, a Detroit judge opted to throw out a lawsuit by Republican Michigan secretary of state candidate Kristina Karamo, who had argued that because of inherent flaws in the city’s system for counting mail-in ballots, the state shouldn’t count Detroit’s absentee ballots and voters should be required to cast their votes in person.

Trump called for his followers to “protest” in response to alleged disenfranchisement at the ballot box.

Meanwhile, though voting machine errors have sparked concern and unwelcome feelings of deja vu connected with the messy 2020 presidential contest, analysts have long predicted that Republicans are likely to clean house this election, tipping the balance of power in state and federal government solidly to the right.

However, in the days leading up to the election, Democrats have sought to tamp down Republican enthusiasm about an impending “red wave,” suggesting Americans are likely to merely witness a “red mirage” that evaporates after all ballots are counted in the days after the election.

The predictions have triggered outrage on the right, with conservatives arguing that the “mirage” narrative cloaks a concerted effort by the left to rig the election in their favor.

“They are literally going to tell us every election now that sure it looks like the GOP won but just wait we’ll count the votes until they didn’t,” wrote columnist Auron MacIntyre.

They are literally going to tell us every election now that sure it looks like the GOP won but just wait we’ll count the votes until they didn’t pic.twitter.com/d2vKbAwU2c

White House Press Secretary Karine Jean-Pierre sparked backlash on Monday for telling reporters that “[w]e may not know all the winners of elections for a few days.”

Jean-Pierre claimed that it “takes time to count all legitimate ballots in a legal and orderly manner” and argued “That’s how this is supposed to work.”