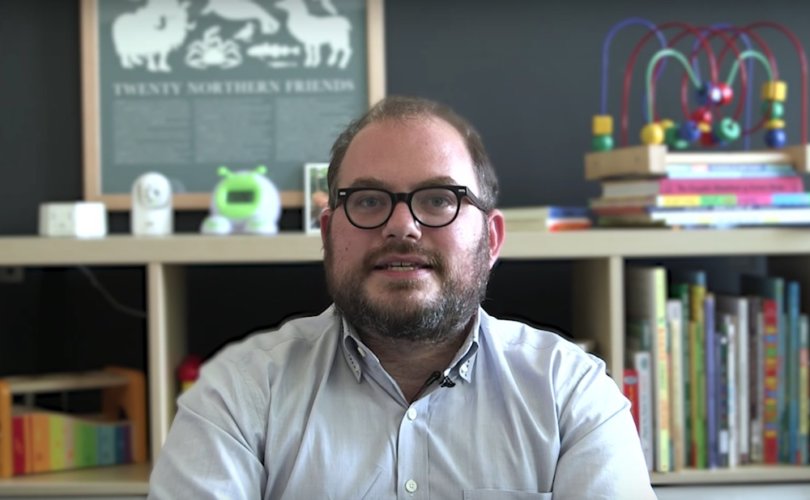 November 9, 2018 (LifeSiteNews) – The Antifa mob that descended on conservative commentator Tucker Carlson’s home Wednesday has earned widespread bipartisan condemnation, but one prominent liberal is in the hot seat now for offering a partial defense of their actions.

Members of the Antifa-affiliated group Smash Racism DC, which has a history of threatening right-of-center public figures, gathered in front of Carlson’s Washington, D.C. home Wednesday evening to, in their own words, “remind you that you are not safe.” They chanted that the Fox News host and Daily Caller co-founder is a “racist scumbag” who should “leave town,” and threatened that “we know where you sleep at night.”

One member of the group “started throwing himself against the front door and actually cracked the front door,” Carlson says, provoking his wife to fear it was a home invasion attempt, lock herself in the pantry, and call the police. Police say a criminal investigation is underway, but no arrests have yet been made.

The incident has been universally denounced among conservatives and widely among liberals, with voices such as Stephen Colbert and even the far-left Media Matters condemning the event. Matthew Yglesias was not among them, however.

Yglesias is the co-founder of Vox, a left-wing website that bills itself as a source of expert “explainers” who “candidly shepherd audiences through politics and policy,” but which has been criticized from both the right and the left for factual errors.

On Thursday, Yglesias wrote a series of tweets arguing that while “terrorizing” Carlson’s family was “probably not tactically sound,” it had a coherent motive: “make them feel some of the fear that the victims of MAGA-inspired violence feel thanks to the non-stop racial incitement coming from Tucker, Trump, etc.”

The comments provoked a variety of appalled responses:

You're a special kind of piece of crap, aren't you? https://t.co/JI5wdiJMWw

Being a sociopath is pretty typical for people on the Left who do politics for a living, so not surprised.

You need to get help. If you can't empathize with people being harassed and threatened at their own house, you have a problem. Regardless of political stripe or how despicable you may find the subject of harassment.

His “victims”? What's wrong with you? https://t.co/90KTaTfUyK

Maybe you need to sit down with yourself and question your inability to empathize with fellow humans.
And while you are at it, how politics has taken away some of humanity and rational thinking.
But you got likes from your group, so maybe do it after the dopamine levels subside.

I'm sure Matt would feel the same way if a mob showed up at his house because they thought he was victimizatizing people via his preference for soft socialism. Or would all bets be off if it was your doorstep, Matt? https://t.co/bz6vx2FPiy

Shortly after his initial tweets, Yglesias agreed with a responder who suggested he not “publicly speak when you're upset,” and said he would “stop tweeting for a bit.” He returned a few hours later to discuss other subjects, but the Daily Caller reports that at some point Thursday night he deleted his entire 3,738-tweet Twitter history. Numerous Twitter users have preserved screenshots of his original offending tweets.

Yglesias has since resumed tweeting, primarily on other subjects, but a recent item on his feed, ironically, is a retweet objecting to unidentified critics allegedly posting his home address online. (The Antifa-affiliated protesters posted Carlson’s address online.)

A bunch of conservatives were dog piling @mattyglesias yesterday and they doxed him right in a reply with his address. I reported it to @jack and they said it didn't violate their rules.

Several critics have noted that Yglesias has a history of extreme statements about political opponents, including that “The world outlook is slightly improved with @AndrewBrietbart dead” and comparing John McCain to French politicians who preferred Adolf Hitler to their prime minister in the 1930s, a week after the senator’s death.

In 2015, Yglesias wrote that the birth of his son somehow left him “with my own pro-choice convictions increased tenfold.”