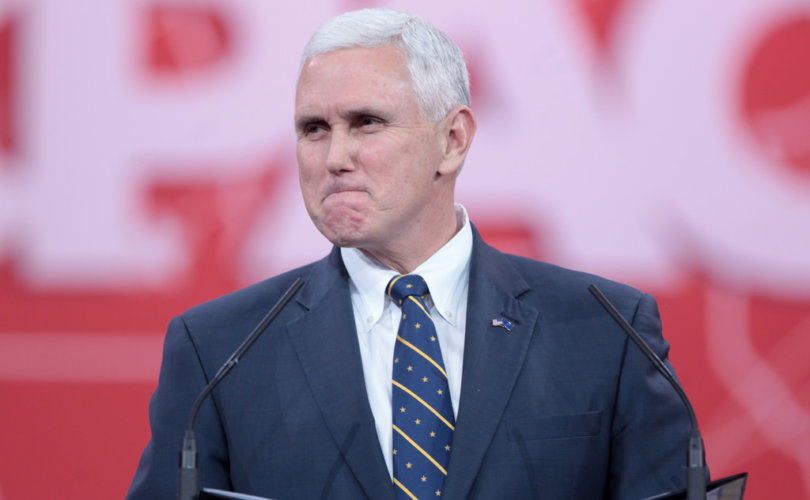 EAU CLAIRE, Wisconsin, May 17, 2019 (LifeSiteNews) – Vice President Mike Pence added his voice to those cheering Alabama for enacting a near-total abortion ban this week, taking the opportunity to contrast it with other states pushing to legalize virtually-unlimited abortions.

On Wednesday, Alabama Republican Gov. Kay Ivey signed into law the Alabama Human Life Protection Act, which criminalizes abortion for any reason other than to “avert (a mother’s) death or to avert serious risk of substantial physical impairment of a major bodily function.” The news has been met with joy from pro-life activists, outrage from the abortion lobby and its allies, and some strategic disagreement among conservatives.

While visiting Wisconsin for a speech Thursday, Pence told reporters he praises states such as Alabama for “embracing life,” the Washington Times reports. “But sadly, many states around the country are also adopting extreme pro-abortion legislation,” he added, citing a law New York enacted in January that effectively permits abortion-on-demand up until birth.

The vice president also said it was “deeply troubling to millions of Americans” that pro-abortion members of Congress refuse “even to vote on a bill that would protect children that are born alive,” referencing legislation that would require infants who survive failed abortions to be shown the “same degree of professional skill, care, and diligence” as would be given following an intended birth, and then be “immediately transported and admitted to a hospital.”

“I’m proud to be part of a pro-life administration,” Pence declared. “And President Trump and I have worked to stand for the sanctity of life since the outset of this administration. And we’ll continue to stand strongly there.”

In contrast to Pence’s remarks, House Minority Leader Kevin McCarthy said Thursday that the Alabama law “goes further than I believe” because it lacks rape or incest exceptions, Politico reports. “That’s exactly what Republicans have voted on in this House, that’s what our platform says.” Last November, McCarthy defeated Rep. Jim Jordan of Ohio, who was running as a conservative reformer, for leadership of House Republicans.

The state chapter of the left-wing American Civil Liberties Union (ACLU) is preparing a lawsuit to block the law from taking effect, something bill supporters welcome as the measure was intended, in the words of Republican state Rep. Terri Collins, as a “vehicle to revisit the constitutionally flawed Roe v. Wade decision.”