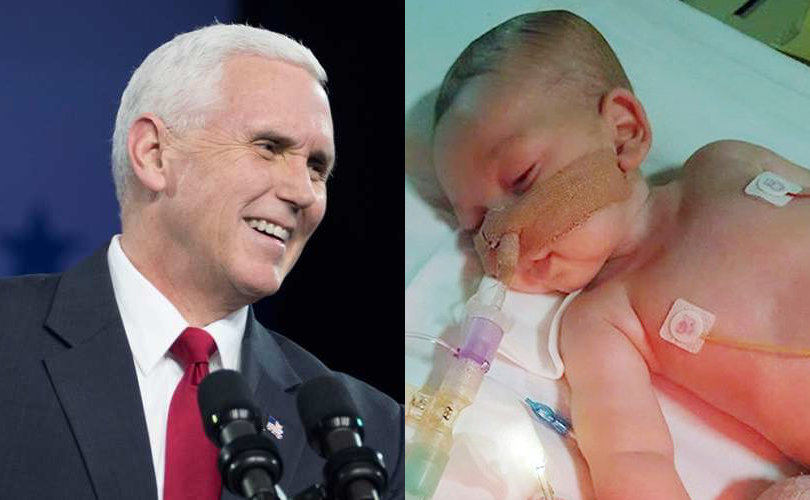 July 31, 2017 (LifeSiteNews) – Vice President Pence tweeted and posted on Facebook his sadness at the death of Charlie Gard, the British baby who was taken off life support after a lengthy battle over whether his parents or hospital could determine his course of care.

Saddened to hear of the passing of Charlie Gard. Karen & I offer our prayers & condolences to his loving parents during this difficult time.

Pence previously defended Charlie and his parents' rights in an interview with Rush Limbaugh. Trump had helped draw attention to the case by offering his support for Charlie as well.

Catherine Glenn Foster, president of Americans United for Life, said her heart was “heavy” when she learned of Charlie's death. She had been in England assisting Charlie's parents, Chris Gard and Connie Yates.

“We are so thankful for his life, which though too brief, has made a lasting impact on the world and drawn together people from all walks of life and political persuasions, uniting them around the dignity and value of every human being,” said Foster. “Our hearts go out to Connie and Chris, who fought the good fight with Charlie. Their fight will continue as Charlie's legacy, so that we can build a culture that respects life, and protects the lives of the most vulnerable.”

Chris and Connie “not only have suffered the loss of their precious baby boy, but have had to endure the interference and obstruction of the courts and British health system in their fight for their child’s life,” said Maureen Ferguson, senior policy adviser for the Catholic Association. “Whether one agrees with the Gard’s decision to pursue experimental treatment or not, this excruciating decision should have belonged to his loving and devoted parents.”

“There was no apparent compelling justification for the courts to override and replace the unique parental bond of love in this case, which has only added to the heartbreak of Charlie’s passing,” Ferguson continued. “The international response to the plight of this baby is a beautiful testament to the irreplaceable value of one human life.”

March for Life President Jeanne Mancini said Chris and Connie's “admirable fight for their child's right to life has had a profound and lasting impact on the entire world.”

Pope Francis tweeted that he entrusted “little Charlie to the Father.” He had previously spoken out in defense of the baby and his parents' rights, as some prominent Catholic leaders like the Pontifical Academy for Life's Archbishop Vincenzo Paglia issued vague and even anti-parental rights statements.