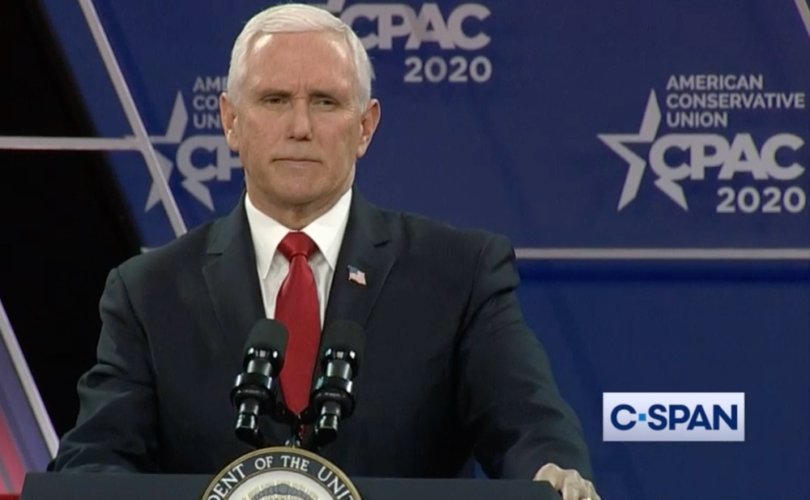 February 27, 2020 (LifeSiteNews) — The Trump administration is “defunding” Planned Parenthood ahead of a 2020 presidential election that shapes up as a fight between freedom and socialism, Vice President Mike Pence told the nation's largest gathering of conservatives today.

Pence told the Conservative Political Action Conference (CPAC) that he was proud to serve under “a president who stands without apology for the sanctity of human life” (see minute 21:15 of video below for remarks).

After noting that President Donald Trump “made history by becoming the first president to attend the March for Life last month on the National Mall,” Pence then explained some of the ways in which Trump has reduced funding to abortion businesses.

“He signed legislation to make it possible for every state to deny Title X funding to abortion providers,” he said “And just this week the Ninth Circuit Court of Appeals upheld President Trump’s executive order denying taxpayer funding to family planning clinics that make referrals for abortion. We are defunding Planned Parenthood.”

Pence also said that “in support of the rule of law,” Trump has kept his word to conservatives by appointing “more than 190 conservatives to our federal courts at our every level, including Justice Neil Gorsuch and Justice Brett Kavanaugh.”

Speaking of those appointments, Pence said, “I’ve gotten to know a lot of these incredible men and women and I can assure you that they are all principled jurists who will uphold the God-given liberties enshrined in our constitution, like the freedom of religion, the freedom of speech, and the Second Amendment right to keep and bear arms.”

Pence took aim at the position of Democrat politicians on life issues, referencing the failure of the Senate to pass the Born-Alive Abortion Survivors Protection Act.

This was “a week when Democrats in the United States Senate actually voted down a bill that would have extended legal protections to babies that survive abortions.”

Pence then told pro-life Democrats that they “have a home in today’s Republican Party.”

“Life is winning in America,” he said, “and that’s what makes it so remarkable that every leading Democrat running for president has actually said that there’s no room in today’s Democratic party for pro-life voters.”

“So let me say to every pro-life American, Republican, Independent, or Democrat – you have a home in today’s Republican party. President Donald Trump is the most pro-life president in American history.”

In the second half of his speech, Pence mocked the current Democrat presidential hopefuls, describing the most recent Democratic primary debate as a “demolition derby.”

“I mean think about it,” he said, “now you’ve got these Democrats with the crummiest ideas in politics. They’re all smashing into each other and eventually there’ll be one left driving. But I think we all know how this is going to end. There’s going to be a monster truck with a big ‘T’ on the hood that’s going to drive into the infield and roll right over it! It’s going to happen.”

Becoming serious again, Pence said that “the truth is today’s Democratic Party has been taken over by radical leftists, who want higher taxes, open borders, and late-terms abortions.”

“It’s really astonishing to think that the party of Harry Truman and JFK is actually on the verge of nominating an avowed socialist as their party’s standard bearer,” he continued. “The Democratic party is on the verge of nominating a candidate who honeymooned in the Soviet Union, wants to take away the health insurance of 160 million Americans, and speaks glowingly of socialist dictatorships in Cuba and Venezuela.”

“And let’s just be clear,” he said, “this isn’t just about Bernie (Sanders). Despite what the media loves to tell you, there are no moderates in this Democratic field.”

The 2020 Democrats are all virtually in lockstep on social issues: They support taxpayer-funded abortion on demand and the homosexual/LGBT cause. At least two candidates – Sen. Elizabeth Warren and Pete Buttigieg – list their gender pronouns in their Twitter bios. The latter is in a same-sex “marriage.” Warren says she will let a gender-confused child vet her nominee for Secretary of Education if she wins.

Former Vice President Joe Biden has said he would direct the Department of Justice to “do everything in its power” to block state laws that place any restriction on abortion, including parental notification requirements, ultrasound laws, and waiting periods. Meanwhile, Sanders has threatened that he would “use the Department of Justice to go after those states” that restrict abortion “in every way that I legally can.” Every Democrat candidate has also pledged to nominate pro-abortion judges to the Supreme Court and federal bench.

Earlier this week, Sanders unveiled his plans to fund universal child care and pre-kindergarten programs that would mean all children in the United States from infancy would have access to taxpayer funded, full-day, full-week child care and would enter pre-kindergarten beginning at three years old. Pro-family and education experts slammed the proposal as “bad for kids, bad for women, (and) bad for families.”

Meanwhile, Pence highlighted the work of the Trump administration to expand parental choice in education, saying, “And with four more years we’ll give every parent in America the right to choose where their children go to school: public, private, parochial or homeschool. It’s time.”

The vice president said “Democrats have been overtaken by a leftist ideology that history tells us has literally impoverished millions of people around the world and robbed the liberties of generations. And that system is socialism.”

Pence lamented that “far too many young people” have rallied around this cause and that it won’t be enough to just win the next election. Conservatives must win the next generation, he said.

Pence described the upcoming presidential election as a battle between “socialism” and “freedom.”

“Socialism has failed everywhere it has been tried, in every era, on every continent and among every class of people. Freedom works, socialism doesn’t,” he said.

“It was freedom, not socialism, that gave us the strongest, most prosperous nation in the history of the world,” he continued.

“It was freedom, not socialism, that ended slavery, won two world wars, and has made America a beacon of hope for all mankind. It was freedom. And so as the Democratic party seeks to nominate and embrace the failed policies of socialism, we must renew our resolve in this year 2020, as the president said one year ago, ‘America will never be a socialist country.’”