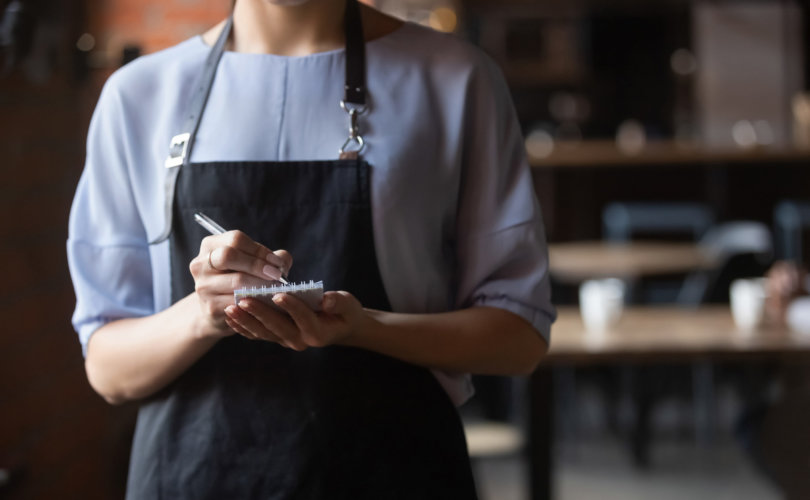 BROOKLYN, New York, February 23, 2021 (LifeSiteNews) — A would-be mom was fired from her waitressing job after saying she needed to research COVID-19 vaccines before taking one.

Bonnie Jacobson, 34, was fired from Brooklyn’s Red Hook Tavern last Monday after informing her bosses that she would not be getting vaccinated right away. Jacobson and her husband were trying for a baby, and she was concerned about the effect a COVID-19 vaccine might have on her fertility.

Restaurant staff in New York City have been declared “essential workers” and are therefore eligible to receive COVID-19 vaccines. On February 8, Red Hook Tavern sent its employees information about vaccines. Because Jacobson had already put off having a baby and was concerned about the effects of COVID-19 vaccines on fertility, she told her bosses at a staff meeting that she would need time to research the new treatment before accepting it. On February 12, however, Red Hook sent another email saying that the vaccine was mandatory.

“Please be advised that we will require that all employees receive the vaccination,” the email stated.

“This will be mandatory for all existing employees and any new hires. The exception to this policy will be if your own personal health or disability prohibits you from obtaining this vaccination,” it continued.

“We encourage you to consult your healthcare professional to determine if getting a vaccine is right for you.”

Jacobson wrote back to her bosses the next day to explain why getting the vaccine was not, in fact, right for her.

“I am choosing not to get the vaccine because there just isn’t enough data or research at this point on its effects on fertility,” she wrote.

“While I fully support the vaccine and understand its importance, I do believe this is a very personal choice. I really hope this choice would not affect my employment at Red Hook Tavern.”

According to the Daily Mail, Jacobson said that she took the coronavirus very seriously and had been making sure she didn’t have it.

“I get tested every 1-2 weeks and have never tested positive for COVID,” she wrote. “I plan to continue these safety practices for as long as necessary.”

The waitress also said that she would “reconsider” her position once there was more research to show that the vaccine did not affect fertility.

In response, Red Hook Tavern wrote to Jacobson on Monday, February 22 to say that she was fired.

“In order to continue employment with us, getting the vaccine is required,” her bosses wrote.

“At this time, your employment will be terminated. We are sad to see you go. If you do change your mind, please do not hesitate to let us know.”

Jacobson indicated that she was shocked by the swift and impersonal way in which she was let go.

“I just wanted more time. They didn’t allow me that,” she said.

“I didn’t even have time to consult a physician. It was a week from being ‘your choice,’ to it's not going to be mandatory, to it is mandatory, to ‘you’re fired,’” she continued.

“I had a very good working relationship there. I just had an employee review on February 6 and it was all positive, so it was truly shocking that it was so impersonal.”

Red Hook Tavern owner Billy Durney told The New York Times after Jacobson’s firing made headlines that he wished he had handled the issue in a different way.

“Once New York state allowed restaurant workers to receive the COVID-19 vaccine, we thought this was the perfect opportunity to put a plan in place to keep our team and guests safe,” Durney said by email.

“No one has faced these challenges before and we made a decision that we thought would best protect everyone,” he continued.
“… (W)e now realize that we need to update our policy so it’s clear to our team how the process works and what we can do to support them. We’re making these changes immediately.”

However, Jacobson has said that she hasn’t been offered her job back and does not want to return.

It is as yet unknown what effects the coronavirus vaccines might have on human fertility.

In December 2020, the U.K. government published a guide to medical professionals about the Pfizer vaccine recommending that it not be taken by pregnant women and advised women of childbearing age not to get pregnant within two months of accepting their second dose. Women were also warned that the vaccine should not be used during breastfeeding, as its effect on babies was still unknown. Regarding fertility, the 10-page “Reg 174 Information for UK Healthcare Professionals” said only that it was “unknown whether COVID-19 mRNA Vaccine BNT162b2 has an impact.”

Also in December, two doctors wrote to the European Medicine Agency, which is responsible for the safety of vaccines, in an attempt to stop human trials of all COVID-19 vaccines, especially the Pfizer vaccine. Among other concerns, Dr. Michael Yeadon, a former head of Pfizer’s respiratory research, and Dr. Wolfgang Wodarg, a health policy adviser, warned that some of the vaccines may prevent the safe development of placentas in pregnant women, resulting in “vaccinated women essentially becoming infertile.”

“Several vaccine candidates are expected to induce the formation of humoral antibodies against spike proteins of SARS-CoV-2,” the doctors wrote.

“Syncytin-1 (…) which is derived from human endogenous retroviruses (HERV) and is responsible for the development of a placenta in mammals and humans and is therefore an essential prerequisite for a successful pregnancy, is also found in homologous form in the spike proteins of SARS viruses,” they continued.

“There is no indication whether antibodies against spike proteins of SARS viruses would also act like anti-Syncytin-1 antibodies. However, if this were to be the case, this would then also prevent the formation of a placenta, which would result in vaccinated women essentially becoming infertile.”

The doctors suggested that because the Pfizer trial protocol says that “women of child-bearing potential” can take part only if they are not pregnant or breastfeeding and are using contraception, it could take “a relatively long time before a noticeable number of cases of post-vaccination infertility could be observed.”

In a British study of COVID-19 vaccine side effects, five miscarriages were reported after the use of the Pfizer vaccine and three after taking the Oxford/AstraZeneca vaccine.