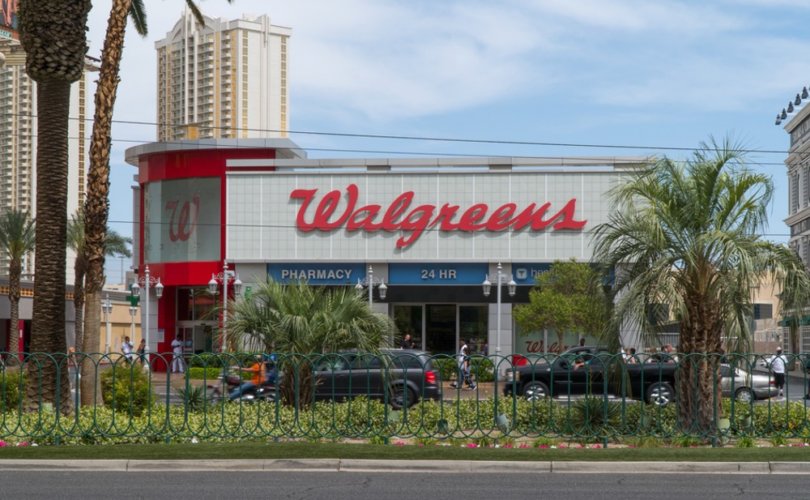 The second-largest pharmacy store chain in the U.S. (CVS is largest) calls its policy “Transgender Inclusion.”  It defines “gender identity” as one’s “deeply-felt sense” of one’s gender, regardless of that person’s “sex assigned at birth.”

The American Family Association (AFA) reports that the new Walgreens pro-transgender policy is the result of pressure from the American Civil Liberties Union (ACLU) of Southern California after a customer was not allowed to use a Walgreens women’s bathroom.

The individual later discovered an ACLU SoCal booth at a Gay Pride festival. An ACLU SoCal lawyer advised Walgreens to issue the policy, citing California law which “protects every person’s right to access restrooms based on their gender identity in workplaces, schools and business establishments,” the AFA reported.

As the AFA did in response to Target’s 2015 transgender changing rooms and bathrooms policy, the family defender created a petition to oppose Walgreen’s policy.

“Walgreens’ store policy endangers women and children by allowing men to frequent women’s restrooms,” states the petition, which has more than 82,000 signatures.

The AFA urges concerned citizens to call Walgreens and voice their objection (1-800-925-4733), and/or call their local Walgreens store.

In September 2015, Target officially announced its support for the Obama-supported “Equality Act” to add homosexuality and transgenderism to protected status under the 1964 Civil Rights Act.  In April 2016, Target announced it would allow men to use women’s private changing rooms and bathrooms.

The response to Target’s pro-transgender policy was swift and devastating. A massive boycott (#BoycottTarget, #FlushTarget) ensued, spearheaded by an online petition against the Target move.  An estimated 1.5 million people signed the petition.

By May 2017, corporate stock plummeted $31.73 a share, from $87.50 to $55.77 – a nearly forty percent drop.  “Target lost billions in revenue after millions of customers stopped shopping at Target’s retail outlets,” Breitbart reported.

Since Target began enabling transgenderism in its changing rooms and toilets, dozens of women and children have reported being victimized by men in the stores.

Sean Patrick Smith, 43, followed a teenage female into an Idaho Target changing room, peered over the adjacent partition and recorded her taking her clothes off with his cell phone. Smith was in a dress and a blonde wig.  He later admitted he used Target’s transgender policy several times before to record women undressing. He pled guilty to a felony count of video voyeurism.

Another Target-enabled incident of sexual harassment occurred in Texas, spurring state Attorney General Ken Paxton to write the retailer. Texas AG Paxton was the lead plaintiff in a multi-state lawsuit against the Obama administration’s pro-transgender bathroom mandate for public schools.

Undaunted, Target unveiled an entire line of pro-homosexual products in May 2017, dubbed “Take Pride.”  The retail giant promised to give 50 percent of proceeds from the t-shirts and other merchandise to the Gay, Lesbian, and Straight Education Network.

“The findings are consistent with the ‘sex-predator’ theory which has posited that sexual offenders may use gender-identity policies in private spaces to gain access to women and children in order to perpetrate sexual violence,” the study’s sponsor stated.  “The magnitude and precise timing of the increase suggests that Target’s gender-inclusion policy accounts for the bulk of it,” WMS’s Paul Dirks said in a press release.

“The most likely hypothesis to explain our findings is that Target’s policy signaled to sexual offenders that voyeuristic offenses would be easier to perpetrate in their stores than elsewhere,” Dirks concluded.  “We believe that this study shows that gender-inclusion policies can bring about increased harm to women and children.”