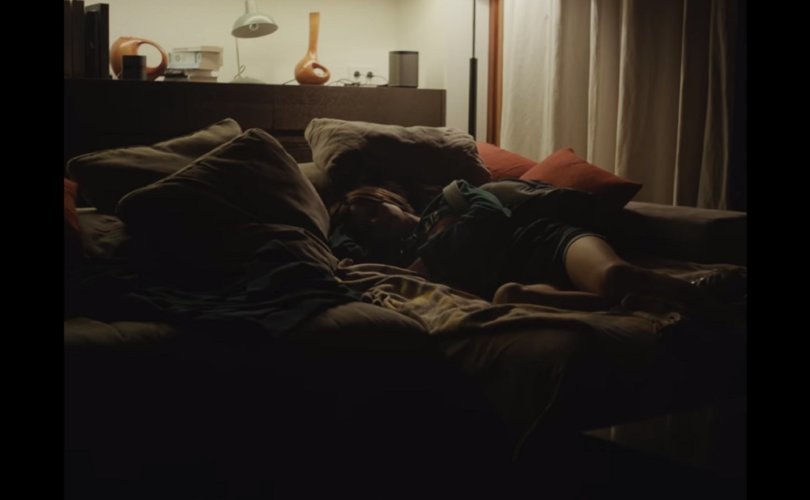 Trailer for 'The Trouble with Being Born.'Berlinale - Berlin International Film Festival / YouTube

BERLIN, February 28, 2020 (LifeSiteNews) — A sci-fi movie portraying a sexual relationship between a man and a robot that replicates his lost 10-year-old daughter has prompted walkouts and outrage at its screenings at the Berlin film festival.

The film, titled The Trouble with Being Born and directed by Austrian Sandra Wollner, stirred controversy at its February 25 world premiere at Berlinale 2020, reported the U.K. Independent.

It depicts a child-like android, played by 10-year-old Lena Watson (a pseudonym), who calls her owner “Daddy.”

While much is implied, the movie “leaves little doubt that the man, played by Dominik Warta, has a sexual relationship with the child robot,” the Independent reports.

According to a review in Slant, the film plot reveals that the android, Elli, “was built to replicate the father’s daughter, who disappeared 10 years before.”

The film evoked disgust on Twitter, with one person calling it “paedophile propaganda,” the Independent reported.

That was echoed by FilmGoblin in a review entitled “Pedophilia gets mainstream nod in The Trouble with Being Born.”

“Who are these people actually kidding?” notes the review.

“Let’s not pretend that this isn’t about mainstreaming the last sexual perversion — other than bestiality — that isn’t socially acceptable,” it adds. “And there’s no argument to be made in defense of the existence of this film by using the ‘Lolita’ defense, or even the ‘well it’s just a robot’ defense.”

Wollner told the Hollywood Reporter, which described the film as a “hidden gem,” that the role was originally intended for a 20-year-old.

However, she decided to cast a child after removing some more explicit elements in the script.

“What I found interesting about it is that we have an android whose only desires are the ones you program it to have,” she said. “I found it fascinating to show the perspective of the world through this machine that does not judge and does not care, and doesn’t need the meanings that we do.”

Wollner added that she was initially “scared” about choosing a child for the part and said that when she was casting for the role, she looked for a minor who came from a “healthy environment.”

It was also necessary that the child come from “the sort of open-minded family who would understand the story they wanted to tell and also allow them to do it,” noted The Hollywood Reporter.

In the end, Wollner found Watson because her parents were known by a friend of a friend.

The child actress used a silicone mask and a wig, which hides her identity and reinforces that “it’s a role she’s playing,” Wollner told Variety.

“Of course, her parents were there during the shoot. She was never naked, she was never running around naked, she never saw anybody naked on set. We just did that in the edit,” she added.

“We had really honest talks with the family, who were there during the shoot. It was very open, very transparent. And of course we talked to [Watson] about the film in a very child-appropriate way,” she told The Hollywood Reporter.

Noted FilmGoblin: “Of course, if you live like an atheist and have a worldview that this world is all there is and that human beings aren’t any more than a conglomeration of cells accidentally swirled together, to both begin and end without meaning in the world, then why wouldn’t you build a kiddie sex robot, thus softening your resistance to going and getting a real kid? Hello, pagan morality.”

As well as portraying a pedophilic incestuous android-human relationship, the movie also seems to have a transgender subplot. When Elli runs away, she is picked up by a motorist who then gives her to his mother as a replacement for the brother she lost 60 years ago, according to Slant.