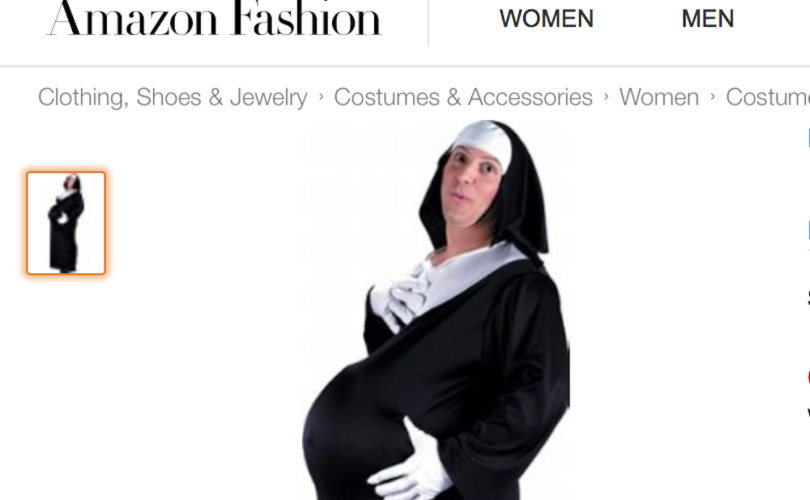 The American Society for the Defense of Tradition, Family and Property (TFP) issued a statement after the “horrible, immoral” costumes offensively portraying Catholic clergy were found on Amazon.com and Walmart.com.

“Amazon and Walmart are selling Halloween costume sets that are directly targeted to offend Christians and mock religion,” American TFP Vice President John Horvat said in the statement, which also termed the costumes as “sickening,” and “obscene.”

In one costume titled “Keep Up the Faith,” a priest is portrayed as sexually excited, and the second is a “Pregnant Nun,” also presented as “Thank You Father.” The “Keep Up the Faith costume was available in varying forms and also shown as a version combined with the Pregnant Nun on Walmart.com.

American TFP has also launched a petition for signers to tell Amazon and Walmart they are appalled and that the anti-Catholic costumes should never be for sale.

The Catholic organization pointed out in its statement how merchants have removed items that offend Native Indians, Muslims, homosexuals, and transgenders. “And yet they seem absolutely unconcerned about deliberately mocking Christians.”

As of press time, the petition was approaching 17,000 signatures, and some of the costumes appeared to be unavailable from Walmart’s website.

Earlier this month, the two mega retailers pulled another costume titled “Granny Tranny” according to news reports, after it generated outrage on the grounds that “it was offensive to the transgender community.”

The Catholic League for Religious and Civil Rights called Amazon and Walmart out for the double standard between Catholics and gender-confused individuals.

“Amazon and Walmart have one standard for transgender persons and one for Catholics,” Catholic League president Bill Donohue said in a statement. “They will not tolerate the slightest insults to the former, but they have no problem offending the latter.

“There are no excuses for what Amazon is doing, but Walmart is worse,” Donohue continued. “It likes to tout itself as a “Christian-friendly” store, yet when it comes to Catholics, it drops its guard. It is not a good cultural sign when corporate elites are more sensitive to cross-dressers than they are to Catholics.”

One of the “Keep Up the Faith” versions now showing unavailable on Walmart.com says the “Costume includes: Full cut black robe with attached collar, jock strap with growing groin, and hand pump.”

A link to the “Pregnant Nun” on Walmart.com says the site is having technical difficulties, but the costume description remains in search results, stating “This Pregnant Nun Costume will gets others' attention because it is not every day that you see a nun that is nine months pregnant walking down the street.”

The American TFP petition can be found HERE.