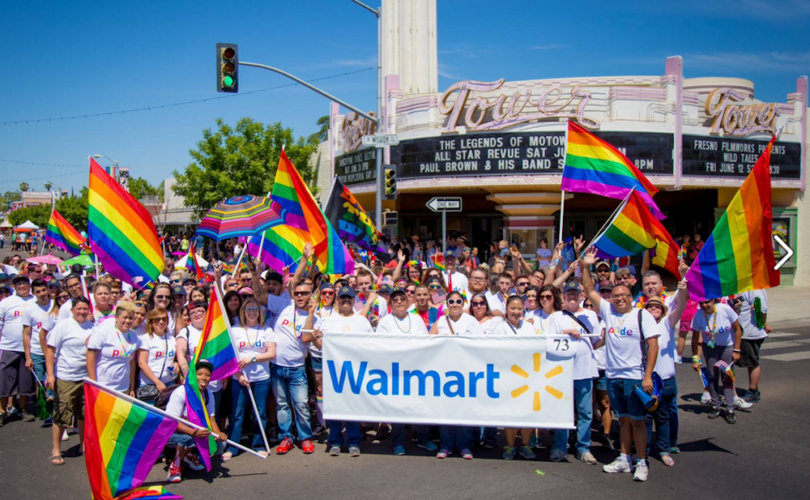 Walmart was an official sponsor of the 2015 LGBT Pride Parade & Festival in Fresno, California.

(The Daily Signal) — Families of four trans-identifying youth and two doctors, represented by the American Civil Liberties Union, testified last month against the Arkansas law banning sex-reassignment treatment for minors. Behind the effort to strike down Arkansas’ Save Adolescents From Experimentation (SAFE) Act is the wealthiest family in the nation—heirs of Walmart founder Sam Walton’s fortune.

The Walton Family Foundation issued public statements and signed an amicus brief opposing the SAFE Act. Meanwhile, second- and third-generation members of the Walton family have funneled millions of dollars into statewide LGBTQ initiatives. Alice Walton, daughter of Walmart founder Sam Walton, together with her nephew Tom Walton and his wife Olivia Walton, has appeared at the forefront of this cause.

The Alice L. Walton Foundation and Olivia and Tom Walton through the Walton Family Foundation launched a $1 million LGBTQ+ advancement fund after the Arkansas Legislature passed the SAFE Act in June 2021. The Waltons’ fund offered grants to organizations in Arkansas that “provide critical services to the state’s LGBTQ+ community.”

“Our state is in a moment of reflection where each of us must send a message of acceptance to the LGBTQ community that says—‘you belong here,’” Olivia and Tom Walton said in a Walton Foundation statement. “It is also a time for action by recognizing LGBTQ Arkansans face growing challenges that need community-driven solutions.”

The Waltons selected the nonprofit Arkansas Community Foundation to oversee the fund.

“This fund will allow LGBTQ-serving nonprofits in our state to expand their impact on communities and help Arkansans pull together to build a more welcoming and supportive environment for us all,” said Arkansas Community Foundation President Heather Larkin.

The Waltons’ fund has offered grants ranging around $25,000-$150,000 to LGBTQ programs in Arkansas. These include the Equality Crew, Northwest Arkansas Equality, Central Arkansas Pride, and the Transition Closet.

The Equality Crew has advertised LGBTQ-themed events featuring drag queen story hours and drag shows for children in Fayetteville, Arkansas. One of these events—a teens-only back-to-school night for “LGBTQ+ youth” at the Fayetteville Public Library—was canceled for what Equality Crew said were safety concerns.

In the months leading to the Waltons’ initiative, the Arkansas state Legislature voted to pass the SAFE Act in April 2021.

“We are alarmed by the string of policy targeting LGBTQ people in Arkansas,” wrote Walton, who heads the Walton Family Foundation’s Home Region Program. “This trend is harmful and sends the wrong message to those willing to invest in or visit our state.”

He added: “We implore government, business and community leaders to consider the impact of existing and future policy that limits basic freedom and does not promote inclusiveness in our communities and economy.”

The state Legislature overrode the governor’s veto on the same day Tom Walton issued his statement.

In July, U.S. District Judge Jay Moody temporarily blocked the SAFE Act from taking effect in response to a lawsuit filed by the American Civil Liberties Union on behalf of four families of trans-identifying youth and two doctors.

The Walton Family Foundation signed an amicus brief with other businesses and nonprofits in support of Moody’s preliminary injunction of the law. The Waltons signed a similar amicus brief appealing Moody’s decision to the 8th U.S. Circuit Court of Appeals this January. Other amici include the Northwest Arkansas Council and the Arkansas State Chamber of Commerce, both of which are Walton-funded groups.

Many amici employ and serve transgender people, and all amici oppose the Arkansas General Assembly’s passage of HB 1570 (‘Health Care Ban’), which discriminates against transgender people by, among other things, barring health care professionals from providing gender-affirming care to transgender youth … the Health Care Ban will, absent this Court’s intervention, adversely impact amici’s (or their members’) businesses, employees, and customers.

The amici argue that the SAFE Act will push LGBTQ individuals and their families out of the state.

They further argue they will face backlash from consumers and businesses over the SAFE Act, writing: “This will inflict substantial harm on amici, Arkansas businesses, and all Arkansans, because all benefit from a strong economy.”