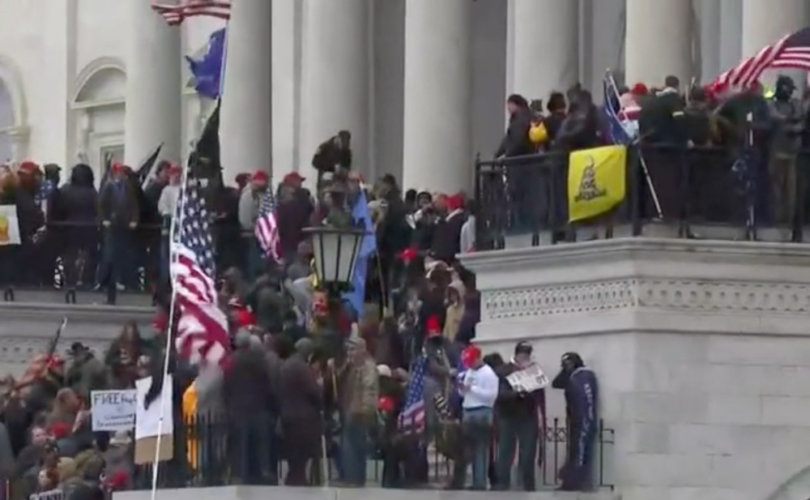 (LifeSiteNews) — As the so-called “Capitol insurrection” of January 6 continues to command the interest of politicians like Liz Cheney and the Biden administration’s response continues to elicit outrage from conservatives, Fox News primetime host Tucker Carlson has released a three-part documentary arguing that it’s the beginning of what he calls “War on Terror 2.0.”

Protesters broke into the U.S. Capitol building on January 6 after former President Donald Trump’s “March to Save America” rally, which was meant to encourage Republican lawmakers to delay the certification of electoral votes from a handful of states over concerns about vote fraud in the 2020 presidential election.

Viral videos showed people engaging in physical altercations with police, pushing against security barricades, breaking through windows, trespassing in congressional offices, and climbing on walls, causing the vote certification to be suspended and lawmakers to be evacuated from the chambers. Other video, however, showed that many were let into the Capitol by police and simply walked the halls after the initial breach.

The hostilities began among people who either left Trump’s speech early or skipped it entirely, but House Democrats quickly moved to impeach the president for supposedly “inciting” violence through his rhetoric. The Senate voted 57-43 against Trump in his impeachment trial, but failed to amass the 67 votes necessary to convict and bar him from seeking office in the future.

Carlson’s Patriot Purge is a three-part documentary on the riot and its aftermath, viewable exclusively through the subscription-based Fox Nation streaming service (but can be accessed with a free trial through TuckerCarlson.com). It begins with Carlson trying to draw an equivalence between the Bush administration’s pursuit of Islamic terrorists with the Biden administration’s pursuit of supposed right-wing “domestic extremists.”

“The very same corrupt interests in Washington that pushed the Iraq War under false pretenses are now pushing the lie of a domestic white terror army,” Carlson says, without naming those “interests” or elaborating on the evidence behind the arguments for and against invading Iraq. “January 6 is being used as a pretext to strip millions of Americans, disfavored Americans, of their core constitutional rights, and to defame them as domestic terrorists.”

The documentary plays video of various left-wing figures promoting that narrative, including President Joe Biden declaring that “terrorism from white supremacy is the most lethal threat to the homeland today,” then dismantles its first example of mainstream misinformation: the claim that Capitol Hill Police Officer Brian Sicknick was murdered by Trump supporters.

Democrats and their allies first claimed that Sicknick was bludgeoned to death with a fire extinguisher, then that he was killed by exposure to pepper spray. But while he did die the day after the riot, in April the official medical examiner’s report revealed that he had suffered two strokes on January 6 before dying of “natural causes.”

The documentary goes on to interview January 6 rally organizer Ali Alexander, who says he “consulted members of Congress” who “felt like this would add pressure to make sure our voices were counted. We knew it was a losing fight, but we still believe in miracles, and we wanted to know, well who are the Republicans that need to be primaried and who doesn’t.” Carlson adds that his team reviewed audio of one of those consultations, in which “there was no talk of insurrection, nothing even close.”

Alexander was not at the Capitol when violence broke out, but says the Trump campaign texted him to ask him to “get there and de-escalate, because things are not going well. So we started to approach the side of the Capitol, where no protests had happened in November, no protests had happened in December.” He described the “helpless” feeling of trying to appeal to a six-figure crowd “with nothing but megaphones” that could only be heard by a sliver of the crowd.

Viewers next hear from BlazeTV journalist Elijah Schaffer, who suggests that the press gave the pro-Trump crowd a “narrative to gaslight the right wing into thinking they could riot too and get away with it,” thanks to the preceding several months worth of sympathetic coverage, as well as supportive comments from the likes of House Speaker Nancy Pelosi and future Vice President Kamala Harris, for large-scale violence perpetrated across the country in the name of the Black Lives Matter (BLM) movement.

“January 6 was just mom and dad who were mad about what they saw as an election that they thought was unfair, rigged, fortified, stolen, it doesn’t matter what you say it is, they were just angry and a lot of them just got caught up in the front lines of chaos,” Schaffer says.

The documentary goes on to make the case that the violence is at least partly attributable to the work of agitators from outside groups, such as John Sullivan of Insurgents USA. Video and witness accounts appear to depict individuals changing clothes at the event to look like Trump supporters.

Journalist Tayler Hansen, who was assaulted by Antifa/BLM protesters during a Sullivan-involved event in Utah, says Sullivan “knows his stuff, and he knows how to start something in a crowd,  or almost talk somebody into initiating violence for him on his behalf.”

Regarding the moment tensions boiled over into violence, Hansen and Schaffer describe a sequence of events that may suggest outsiders lit at least one of the matches, along with apparent overreaction from law enforcement. As video of the confrontation outside the Capitol plays, Shaffer says that it was initially Trump supporters trying to keep back other supposed Trump supporters. “And that’s when it just got weird”:

Things got peaceful, more peaceful and people began to settle down, [but then] police officers began to fire impacting munitions down into the crowd, and it riled up the crowd, and they started fighting and moving forward. The situation had just got de-escalated; why would you want to escalate?

Hansen adds that another contributing factor, also caught on video, was an officer pushing to the ground a protester who had been climbing up a wall to the stairs. It’s unclear how severely the fall injured the protester, but Hansen says the sight “made the crowd angry enough to actually push up the stairs.”

On the possibility alleged elsewhere that the federal government itself instigated the riot to tarnish Trump supporters’ public image, Patriot Purge is more speculative. It notes that FBI informants were deeply involved in a plot last year to kidnap Michigan Gov. Gretchen Whitmer, and that the same supposed “right-wing militia group” is alleged to have ties to both events, but as to whether the same thing happened on January 6, the bulk of the content consists of personal opinion from foreign policy analysts.

“I saw this as a coordinated effort, that there are different cadres of agents, provocateurs, and other troublemakers who had a sort of a military-like precision in what was to become a storming of the Capitol building,” says J. Michael Waller, a senior analyst at the Center for Security Policy who engineered such “provocations” against the Soviet Union during the Cold War. “It is my opinion that false flags have happened in this country, one of which may have been January 6,” adds former Army psyops officer Capt. Emily Grace Rainey.

Whatever the riot’s origins, the Biden administration responded with what it called a “shock and awe” campaign against those associated with it and the non-violent rally preceding it.

One particularly egregious case highlighted by the documentary is that of Paul and Marilyn Heuper, an Alaska couple that attended the rally but never entered the Capitol. On April 28, their home was the target of a pre-dawn raid by the FBI, based on mistaking Mrs. Heuper for a photograph of a different woman thought to have stolen Speaker Pelosi’s laptop. (Riley Williams of Harrisburg, Pennsylvania, was later charged with the theft, but does not resemble either Heuper or the mystery woman in the photo presented to the couple.)

Another attendee to face legal consequences was former Drug Enforcement Administration (DEA) agent Mark Ibrahim, who was charged with crossing police lines while wearing his government-issued sidearm, but claims that he was invited there by an FBI informant and refused to enter the building despite the informant urging him to. Carlson says his team has confirmed that the informant invited Ibrahim.

The aforementioned Capt. Rainey, meanwhile, says she saw her security clearance revoked and was denied a reserve commission for leading a delegation of more than 100 North Carolinians to the rally, though she did not enter the Capitol either.

“It cannot be overstated how dangerous targeting your political opponents is and purging them out of the one place where you are legally allowed … government-ordered use of weapons,” she says. “We are slowly purging out of the military any dissenting voice that may actually stand in the way of using military improperly in the future.”

But perhaps the most alarming allegation in Patriot Purge concerns the conditions in which January 6 defendants have been held for extended periods of time while waiting for their cases to be adjudicated.

The documentary interviews Richard Barnett, the man infamously photographed sitting at Pelosi’s desk, as well as his attorney Joseph McBride, formerly of the Innocence Project. Barnett faces up to eleven years in prison, despite his contentions that video shows him being involuntarily pushed into the building by the sheer density of the crowd, and that a reporter in Pelosi’s office asked him to pose for the desk photo. He also brought a stun gun into the building, but maintains it was inoperable and used strictly as a walking stick.

Barnett and other defendants allege they were held in a facility of abominable sanitary conditions described as “full of black mold,” and that he both witnessed and experienced severe physical abuse at the hands of prison guards. He says he knows of another inmate pulled out of his cell and beaten so badly he lost sight out of one eye, while Barnett maintains that he personally endured a verbal threat to his wife as well as being “slammed face first on the concrete.”

Finally, the documentary examines the case of Ashli Babbitt, a protester and Air Force veteran shot and killed January 6 by Capitol Police ​​Lt. Michael Byrd. The film returns to journalist Hansen, who was there and describes the incident as follows:

There were three officers guarding the door, and that’s where Zachary Alam came in, he was the agitator in this situation, he was punching right over officers’ shoulders. That’s when officers moved to the right, that’s when Ashli Babbitt, she hopped up, she had both of her hands, all her weight was forward, through the window, and that’s when the officer took a step forward and seemed to execute her.

Carlson adds that “according to several witnesses on Ashli Babbitt’s side of the hallway,” Byrd “gave no verbal warning” before shooting her. “This shooting would violate any department’s policies prohibiting the use of deadly force,” Babbitt family attorney Terrell Roberts says.

Last month, conservative watchdog group Judicial Watch obtained documents indicating that while Babbitt had a folding knife in her pocket at the time, which is prohibited inside the Capitol, it was not visible to Byrd and neither he nor other witnesses saw any weapons in her hands. The documents also contain conflicting testimony as to whether Byrd warned Babbitt before shooting.

Ultimately, Patriot Purge introduces viewers to a broad range of concerning aspects of the January 6 riot, its coverage, and its aftermath, and offers perspectives and insights missing from mainstream coverage of the story, but does not go into significant depth on the facts and dueling claims behind its various subjects. Instead it serves as an invitation for viewers to dig deeper into what they are told, and to approach the government’s claims of combating “extremism” with deep skepticism.