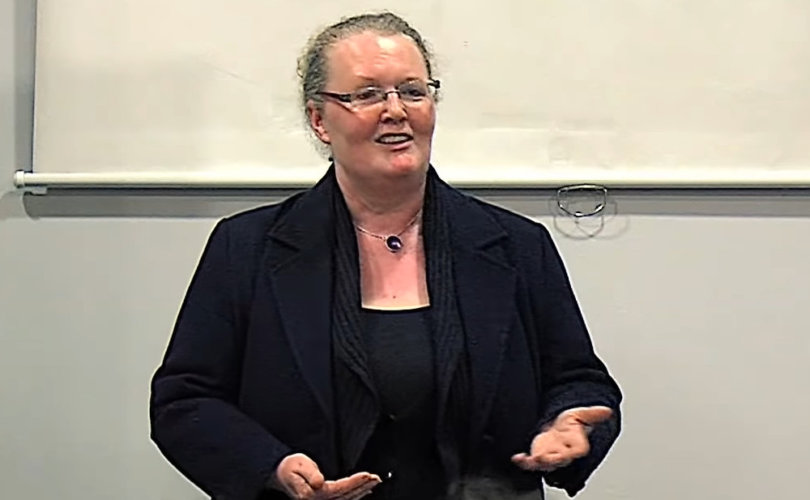 WESTMINSTER, England (LifeSiteNews) – A warrant for the arrest of Irish biomedical scientist, immunology expert, and outspoken lockdown critic Dolores Cahill, Ph.D., has been issued in England.

Cahill, a faculty member at University College Dublin’s (UCD) School of Medicine, has spoken at a number of rallies in the U.K. and Ireland on COVID-19 and the related public health policies, criticizing the government responses to the virus.

Cahill also was featured at the Truth Over Fear Summit in October 2020, where she stated that the March 2020 declaration of a pandemic by the World Health Organization (WHO) was based on “no known moral, ethical, legal, scientific or medical basis,” and that the attending lockdown measures imposed in many parts of the world as a result are “not about COVID-19 anymore.”

The former university lecturer previously promoted “safe and effective treatments (for COVID) which should be made available” while noting that “everything else is about trying to control how many people (are) in your house, whether you can practice your religion, whether you have freedom to travel, whether you can assemble at rallies and not be threatened to be arrested by the police.”

In September 2020, the prominent academic held a rally against lockdown restrictions at London’s Trafalgar Square, attracting hundreds of attendees, with whom she shared her expert opinion on the effects of the virus. At that time, the British government had imposed new and strict restrictions around public assemblies, including a ruling that outdoor gatherings of more than 30 people were prohibited. More than 30 people were reportedly arrested at the event.

After her appearance in London, authorities requested a hearing on June 16 in what is known as a “single justice procedure,” in which a plea may be submitted for a decision by a magistrate, without the need to appear in court.

Cahill’s alleged offenses are based on contraventions against coronavirus-related rules, introduced in March 2020, one of which is holding a gathering outdoors with more than 30 people, and the other being her participation in a gathering of more than six people in any place.

Court documents show that Cahill did not attend the hearing, which was optional. After her decision to forgo the hearing, the professor was called to appear in court on August 10, charged with two offenses related to the September demonstration, but she failed to show. Westminster Magistrate’s Court, where Cahill was requested to appear, subsequently issued a warrant for her arrest.

The court told LifeSiteNews that, as of August 23, no arrest has been made and that the case has been postponed until September 10, one month after the warrant was issued.

Cahill has faced widespread criticism for her stance on the coronavirus crisis, stepping down from her position as chairperson of the Irish Freedom Party and no longer holding a teaching position at UCD, though she is still a faculty member at the university.

The biomedical scientist has strongly objected to the perceived usefulness of mask-wearing, which has been substantiated in many studies into mask efficacy, including the Danish randomized control trial of mask efficacy against COVID-19.

Published in the Annals of Internal Medicine as early as November 2020, the Danish study included more than 6,000 participants, with 4,862 fulfilling the duration of the analysis. A near 50/50 split of mask wearers to control measures was put into place. The researchers found that mask use “did not reduce the SARS-CoV-2 infection rate among wearers by more than 50% in a community with modest infection rates, some degree of social distancing, and uncommon general mask use.” The team thus concluded that “no statistically significant difference in SARS-CoV-2 incidence was observed” between mask users and non-mask users.

Despite the evidence against the usefulness of masks against the virus, Cahill was refused entry to an electoral count center on July 9 in Dublin, where she stood in a local by-election as an independent candidate because she would not wear a face mask.

LifeSiteNews attempted to contact Cahill for comment but was unable to reach her in time for publication.