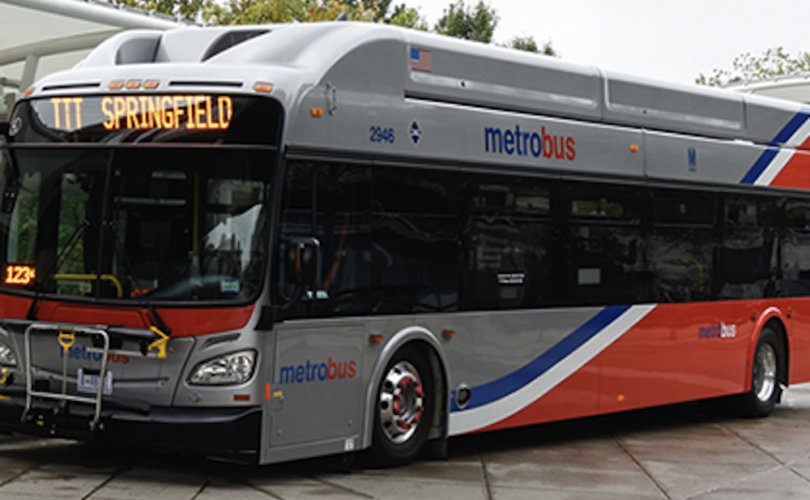 WASHINGTON, D.C., November 29, 2017 (LifeSiteNews) – The Archdiocese of Washington is suing the Washington Metropolitan Area Transit Authority (WMATA) – the agency responsible for the city’s metro system – for rejecting a Christmas ad.

The Archdiocese is asking a federal court for injunctive relief that will allow them to run their ad, which invites people to “Find the Perfect Gift” this Christmas, on metro buses.

The website the ad sought to promote says “Jesus is the perfect gift” and lists Mass times, Advent and Christmas traditions, and ways to give gifts to the less fortunate through Catholic Charities.

“The rejected ad conveys a simple message of hope, and an invitation to participate in the Christmas season,” said Ed McFadden, secretary for communications for the Archdiocese of Washington. “Yet citing its guidelines, WMATA’s legal counsel said the ad ‘depicts a religious scene and thus seeks to promote religion.’”

“To borrow from a favorite Christmas story, under WMATA’s guidelines, if the ads are about packages, boxes or bags … if Christmas comes from a store … then it seems WMATA approves. But if Christmas means a little bit more, WMATA plays Grinch,” he said.

“WMATA's censors have rejected the Archdiocese of Washington's ‘Find the Perfect Gift’ ad campaign because depictions of sheep, shepherds, and stars constitute a ‘religious scene’ in violation of Metro policy,” said Andrea Picciotti-Bayer, legal adviser with The Catholic Association.

The DC metro system, known for its chronic delays, inefficiency, fires, and shutdowns, is the butt of many local jokes. A number of social media accounts, including the “Unsuck DC Metro” one, highlight the daily struggles commuters face on the metro.

Metro has rejected ads before, and, as the “Unsuck DC Metro” account pointed out, ends up racking up legal fees defending their censorship.

Metro's ad policy surely drives a lot of potential advertisers away.
On the other hand Metro rejects many ads for flimsy reasons, not only forgoing revenue, but PAYING losing legal fees.

“We believe rejection of this ad to be a clear violation of fundamental free speech and a limitation on the exercise of our faith,” said Kim Fiorentino, the Archdiocese’s chancellor and general counsel. “We look forward to presenting our case to affirm the right of all to express such viewpoints in the public square.”

In the summer of 2015, WMATA let Carafem, an abortion facility that styles itself as a “spa,” advertise its lethal services. It then barred Carafem from advertising.

The American Civil Liberties Union (ACLU) is currently suing WMATA for rejecting ads from Carafem, Milo Yiannopoulos, and People for the Ethical Treatment of Animals (PETA).

WMATA didn’t allow the ACLU to run an ad showing the text of the First Amendment in English, Arabic, and Spanish. The left-wing group is also suing over that.

Fights over what ads are acceptable on the Metro became more common after Pamela Geller sought to purchase one showing a cartoon of Muhammed. WMATA responded by banning all “issue”-related ads.

According to Susan Timoney, secretary for pastoral ministry and social concerns for the Archdiocese, “Our ad was designed to be placed on metro bus exteriors to reach the broadest audience and to invite everyone to experience the well-accepted joyful spirit of the season, or to share their many blessings with others less fortunate through service opportunities.”

“The Archdiocese wishes to encourage our society to help feed, clothe, and care for our most vulnerable neighbors, and to share our blessings, and welcome all who wish to hear the Good News,” said Timoney.

“Having opened up its bus stops and vehicles to a range of ads, WMATA cannot bar ads that evoke the ‘reason for the season,’” concluded Picciotti-Bayer. “We hope for a prompt resolution of this clear violation of the First Amendment so that the Archdiocese's message of generosity and call to faith be on display around the nation's capital this Christmas.”