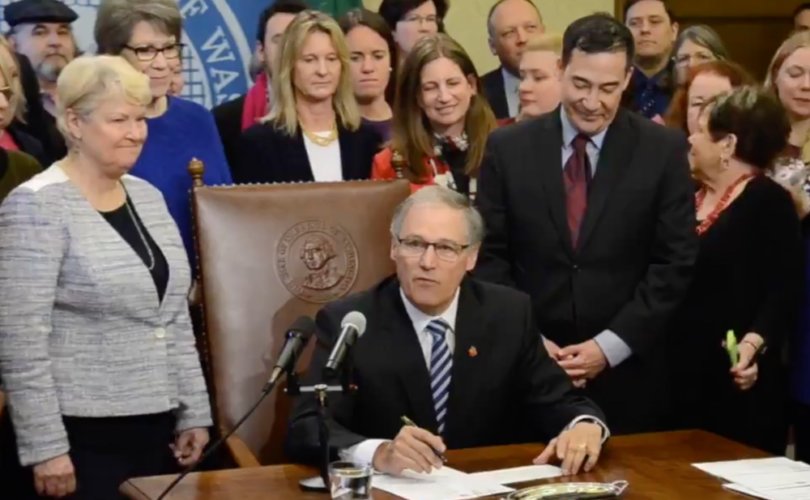 Democratic Gov. Jay Inslee signed S.B. 6219, the “Reproductive Parity Act,” into law on Wednesday. On top of the abortion mandate, the bill requires all insurance to cover contraceptives and voluntary sterilization at no cost. It contains no exceptions for religious employers or conscience objections.

From reproductive parity in health care to equal pay to ensuring we're standing with anyone who says “Me Too,” today's bill signing was all about protecting the rights of women in our state. #waleg pic.twitter.com/yUoKFSEffU

The Associated Press reports that only one insurer in Washington, Health Alliance Northwest Health Plan, does not already cover elective abortions. Company spokeswoman Laura Mabry says it plans to make the change to comply with the law.

The new law “would require contraception and abortion coverage while violating the constitutionally-protected conscious rights of individuals, churches, businesses and others,” Archbishop Peter Sartain of Seattle said. “Maintaining the state’s commitment to religious freedom is vital.”

State Republicans like Rep. Matt Shea have also condemned the bill for violating the “sincerely held religious beliefs of a vast majority of this state.”

The bill’s text frames these mandates as a continuation of Washington’s “long history of protecting gender equity and women's reproductive health,” as did Inslee when signing the Planned Parenthood and NARAL-backed bill.

“I thank Washington's health and pro-choice groups and dedicated pro-choice legislators for making this landmark legislation possible,” he said. “Reproductive health care including family planning and abortion care is health care similar to other essential care services or prescriptions.”

In a letter to the governor, the Washington State Catholic Conference notes that it repeatedly pushed for lawmakers to “include language that would, at a minimum, protect our right to exercise our conscience,” but their pleas fell on deaf ears.

“If they refuse, they face adverse action by the state human rights commission or a civil lawsuit for discrimination,” she said. “It is exactly this type of coercive dichotomy that violates the U.S. Constitution’s guarantee of freedom of conscience.”

The U.S. Supreme Court ruled in 2014 that government could not coerce closely held corporations to provide abortion-inducing drugs. It is currently unknown whether S.B. 6129 will face any legal challenge, but if allowed to stand it will take effect on January 1 of next year.