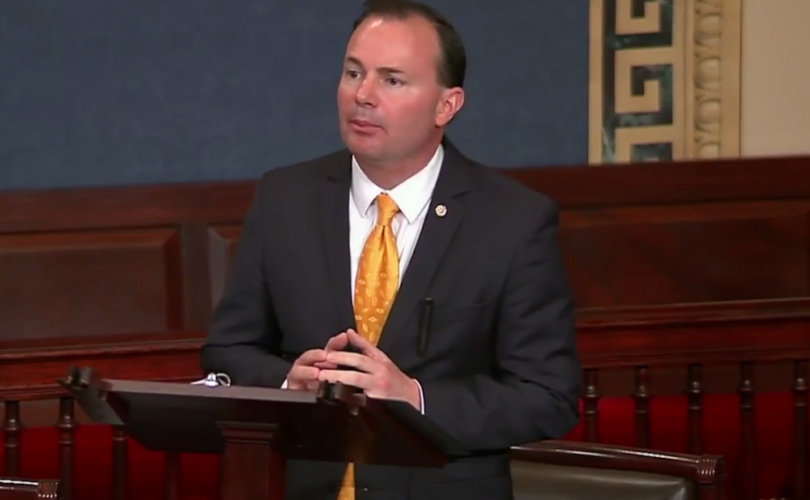 WASHINGTON, D.C., March 29, 2019 (LifeSiteNews) — The Washington Post came out swinging against remarks by Sen. Mike Lee arguing that having more children is America’s best hope for solving its environmental problems, rather than government intervention.

The Utah Republican was speaking on the Senate floor Tuesday ahead of a vote on Rep. Alexandria Ocasio-Cortez (D-N.Y.)’s Green New Deal, a plan that calls for banning fossil fuel and nuclear energy production, replacing every combustion engine in the country, replacing air travel with high-speed rail, gutting and renovation of “every building in America” for energy efficiency, and various other new regulations and entitlements.

Several Democrat presidential candidates quickly endorsed the plan, but the party soon abandoned it as its specific details came to light. Tuesday’s vote was brought by Republicans to force Democrats to take a stand for or against its provisions on the record.

During his remarks, Lee argued that the “solution to climate change won’t be found in political posturing or virtue-signaling like this” or “in the federal government at all.” Instead, the solution is to “fall in love, get married, and have some kids.”

The Washington Post responded with an editorial declaring that “science says otherwise,” citing a 2017 research article that concluded that a “U.S. family who chooses to have one fewer child would provide the same level of emissions reductions as 684 teenagers who choose to adopt comprehensive recycling for the rest of their lives.”

The Post did not address Lee’s actual argument, which isn’t about the carbon footprint of individual children. Rather, Lee was expressing the belief that more children means more future scientists and inventors, and therefore more potential to discover solutions the current generation cannot yet conceive of.

“If you’re going to claim a hypothesis ‘doesn’t track with science’ and provide a study as proof, perhaps you should first check to make sure the study tests the hypothesis at issue,” National Review’s Robert VerBruggen suggested to the Post.

The Post also disputed Lee’s assessment of American education, citing a Pew ranking that placed the United States 38th of 71 countries in math and 24th in science. Again, however, Lee didn’t compare the U.S. to other nations overall, but to “still-industrializing regions.”

The Washington Post could have challenged one aspect of Lee’s remarks, however, but doing so would have contradicted its own editorial position: the implicit premise that climate change requires a “solution” at all.

Proponents of anthropogenic global warming (AGW) — the view that human activity rather than natural phenomena is primarily responsible for Earth’s changing climate — suffered a blow in 2010 with the discovery that their leading researchers had engaged in widespread data manipulation, flawed climate models, misrepresentation of sources, and suppression of dissenting findings.

Activists continue to claim there is a “97% scientific consensus” in favor of AGW, but that number misrepresents an overview of 11,944 papers from peer-reviewed journals. Sixty-six point four percent expressed no opinion on the matter; the 97% number refers only to the minority who did, and even that figure is disputed. The authors of the overview emailed the papers’ 29,083 authors, only 4% of whom responded at all. Many of the authors identified as endorsing the “consensus” later spoke out to say their positions had been misrepresented.

Earlier this month, Greenpeace co-founder Patrick Moore called climate alarmism a “complete hoax and scam,” a “kind of toxic combination of religion and political ideology” that is “as bad a thing that has happened to science in the history of science.”