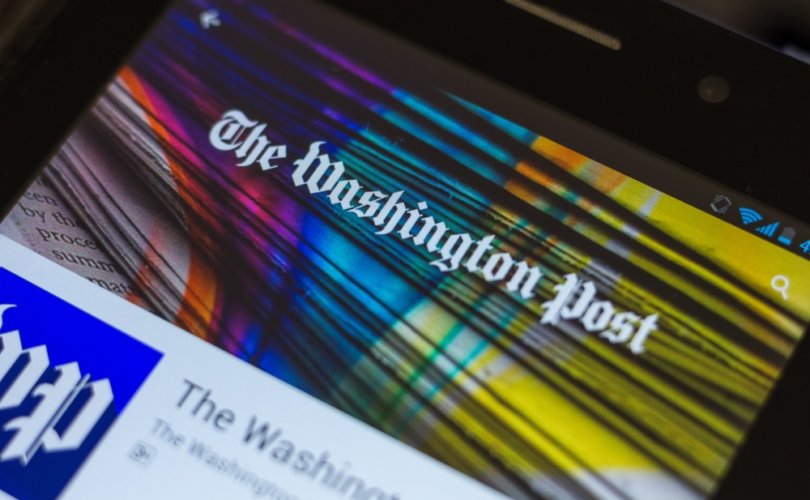 (LifeSiteNews) — The Washington Post has drawn a firestorm of controversy this week after one of its reporters “doxxed” the woman behind the popular anonymous Libs of Tik Tok social media account, which exposes radical woke teachers and other far-left activists by re-posting public Tik Tok videos on other platforms.

Washington Post reporter Taylor Lorenz, who just weeks ago wept on MSNBC while decrying online harassment and bullying allegedly directed at herself and other women, outed the anonymous female owner of the conservative social media account in a hit piece published Tuesday.

In the article, Lorenz argued that Libs of Tik Tok, which has gained over half a million followers and tens of millions of views on Instagram, Twitter, and YouTube since its launch in 2020, “has morphed into a social media phenomenon, spreading anti-LGBTQ+ sentiment and shaping public discourse” by combing through Tik Tok to shine a spotlight on radical left-wing ideology.

Lorenz’s piece revealed the identity of the previously anonymous account creator, along with personal information including her religious beliefs, political views, city of residence, and even her workplace.

To conduct her research, Lorenz tracked down the account owner’s family members, knocking on doors in a bid to gather information.

After the publication of Lorenz’s article, the owner of Libs of Tik Tok stated she’s “holed up in a safe location,” and expressed gratitude for the “thoughts and prayers” she has received from her supporters.

Words cannot express how appreciative I am of the support I’m receiving right now. Thankfully I’m currently holed up in a safe location. I’m confident we will get through this and come out even stronger. Grateful for all the thoughts and prayers ❤️

The Daily Wire noted that Lorenz’s hit piece has been met with “massive backlash from prominent figures on Twitter.” Critics have accused the journalist of hypocrisy after she publicly bemoaned doxing and online harassment just weeks earlier.

I know ur joking, but doxxing, stalking, trying to hurt and smear ppl’s loves ones, threatening them, it’s not ok in any situation. Ppl on here who constantly stoke these politicized outrage campaigns want to dismiss it, but it shouldn’t be dismissed. Has very real consequences

“Taylor Lorenz was just crying on MSNBC about her experience with ‘online violence’ but she has no problem using Bezos money to stalk a private citizen’s relatives by showing up at their HOMES,” said Florida Gov. Ron DeSantis’ spokeswoman Christina Pushaw. “Because she’s mad that @libsoftiktok reposted videos of degenerate predators.”

“This is wrong,” wrote podcaster Tim Pool. “One of the most important journalistic ethics is to minimize harm.”

“The story is not served by exposing a name, the story is served by explaining their background and motives,” Pool said. “Based on the responses to the story, you can see the true motivation was to cause harm.”

Daily Wire co-founder and podcaster Ben Shapiro also chimed in, calling Lorenz “a terrible journalist and worse human,” and quipping, “Targeting a Twitter account that literally just posts Leftists owning themselves because that account damages the Left is pure Lorenz.”

The woman behind Libs of Tik Tok herself took a jab at Lorenz for doxing “a private citizen and her extended family,” posting a screenshot from Lorenz’s appearance on MSNBC in which she had broken down in tears over online bullying.

I doxxed a private citizen and her extended family and people are being mean to me online pic.twitter.com/fjSRYctseC

“They’re threatened by her effectiveness, so they hope to silence her by making her too afraid to continue,” the satire site CEO said. “They want to raise the cost of doing her work so high that she has no choice but to quit.”

“But I think they’ll be surprised by her resolve,” he continued. “She’s afraid, as anyone would be in these circumstances, but she’s also determined to not be bullied, threatened, or harassed into silence. That takes remarkable courage that few people possess.”

Dillon added that he has “worked out a deal with” the account creator “that will turn her heroic, high-risk work into a career.”

3/ I think they’ll also be surprised by the support she receives. I want them to know that she won’t be canceled from her job because this *is* her job now. I’ve worked out a deal with her that will turn her heroic, high-risk work into a career.

Despite the outcry over Lorenz’s hit piece, The Washington Post has thus far stood by its reporter.

Senior managing editor Cameron Barr said in a statement that Lorenz is “a diligent and accomplished journalist whose reporting methods comport entirely with The Washington Post’s professional standards.”

Barr argued that the owner of the Libs of Tik Tok Twitter account “has had significant impact on public discourse and her identity had become public knowledge on social media,” and asserted that the Post “did not publish or link to any details about her personal life.”

However, supporters of Libs of Tik Tok have argued that Barr’s statement was inaccurate, since “the initial story published by Lorenz contained a link to the woman’s work address and other work details,” the New York Post reported.

In a later version, The Washington Post had removed the link to the woman’s work address, telling The Spectator they had “ultimately deemed it unnecessary.”

Lorenz has since stated on Twitter that “insane stuff” has happened to her since doxing the owner of Libs of Tik Tok and her family members, adding that it has been “eye-opening to see how sophisticated and vicious these coordinated accounts have become.”

Libs of Tik Tok responded on Twitter by remarking: “Taylor Lorenz, who had millions of Bezos dollars behind her and coordinated with leftist media to dox a private citizen, is the real victim here.”

Taylor Lorenz, who had millions of Bezos dollars behind her and coordinated with leftist media to dox a private citizen, is the real victim here. pic.twitter.com/66MHRLTNOF

Meanwhile, whether or not she accepts a job with the Babylon Bee, it appears the Libs of Tik Tok account creator has no plans of backing down.

Joining Fox News’ Tucker Carlson on Tuesday, she pushed back against efforts to “intimidate her into silence,” saying, “[t]hat’s just never gonna happen.”