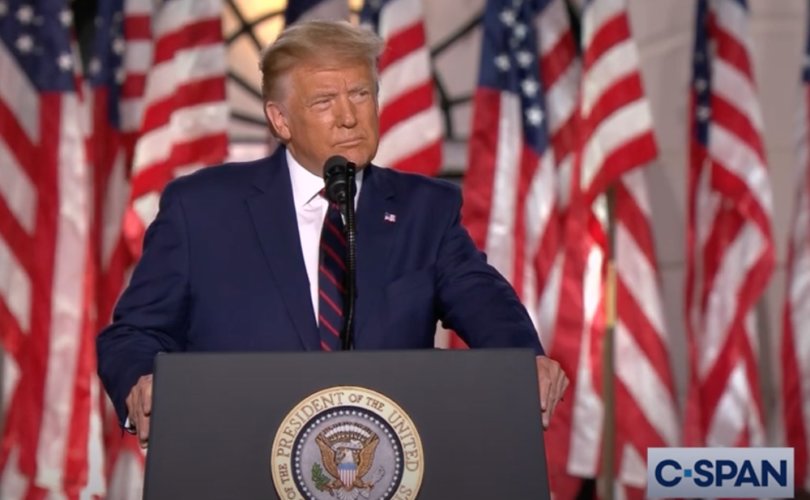 Here are 10 amazing highlights from the four-day pro-life, pro-religious liberty, pro-America gathering, most of which was virtual:

1.) Abby Johnson, a former Planned Parenthood facility director who parted ways with the abortion giant in 2009, is founder of “And Then There Were None,” an organization that has helped 600 people so far out of the abortion industry.

“I support President Trump because he has done more for the unborn than any other president,” she said.

“During his first month in office, he banned federal funds for global health groups that promote abortion,” she continued.

“That same year he overturned an Obama-Biden rule that allowed government subsidy of abortion. He appointed a record number of pro-life judges, including two Supreme Court justices, and importantly he announced a new rule protecting the rights of health care workers objecting to abortion, many of whom I work with every day.”

“This election is a choice between two radical, anti-life activists and the most pro-life president we have ever had,” she declared.

2.) Sister Dede Byrne, formerly a colonel in the U.S. Army Medical Corps, is a member of the Community of the Little Workers of the Sacred Hearts of Jesus and Mary, remains a doctor and surgeon serving the poor in Washington, D.C.

3.) Pro-life teen Nick Sandmann offered a firsthand account of the recklessness of the mainstream media casting the 2020 presidential election as a decision to rally around a president who stands up to press misconduct.

“Looking back now, how could I have possibly imagined that the simple act of putting on that red hat would unleash hate from the left and make myself the target of network and cable news networks nationwide?” asked Sandmann.

“My life changed forever in that one moment,” Sandmann said. “The full war machine of the mainstream media revved up into attack mode.”

“The truth was not important,” to the mainstream media, he explained. “Advancing their anti-Christian, anti-conservative, anti-Donald Trump narrative was all that mattered. And if advancing their narrative ruined the reputation and future of a teenager from Covington, Kentucky, well so be it.”

“And I know you’ll agree with me when we say that no one in this country has been a victim of unfair media coverage more than President Donald Trump,” he continued. “In November, I believe this country must unite around a president that calls the media out, and refuses to let them create a narrative instead of reporting the facts.”

4.) Congressional candidate Madison Cawthorn, a 25-year-old paralyzed from the waist down after a tragic car accident, stunned viewers when he rose from his wheelchair to recite the Pledge of Allegiance.

“In this new town square you don’t have to apologize for your beliefs, or cower to a mob.  You can kneel before God but stand for our flag,” said Cawthorn.

“I say to Americans who love our country, young and old, be a radical for freedom. Be a radical for liberty.  And be a radical for our republic for which I stand,” said the young man, hoisting himself up. “One nation, under God, with liberty and justice for all.”

5.) Legendary Notre Dame football coach Lou Holtz said that “the Biden-Harris ticket is the most radically pro-abortion campaign in history” and that Joe Biden is a “Catholic in name only,” while “nobody has been a stronger advocate for the unborn” than President Donald Trump.

Holtz said that one of the important reasons President Trump has his trust is because “nobody has been a stronger advocate for the unborn.”

“The Biden-Harris ticket is the most radically pro-abortion campaign in history,” he declared. “They and other politicians are Catholics in name only” who “abandon innocent lives,” while “President Trump protects those lives.”

“Can you imagine what would’ve happened to us if President Trump had not shown up in 2016 to run for president?” asked the famed coach. “I’m so glad he showed up.”

“I encourage everyone who loves this country — who loves America — to show up in November for President Trump,” urged Holtz.

“This convention marks a time to celebrate our history. Republicans are the party that freed the slaves, and the party that put the first black men and women in Congress. It’s the party of Frederick Douglass and Abraham Lincoln and now, Tim Scott,” said Brewer, referring to the South Carolina senator.

“Our president has made incredible strides to end mass incarceration and give unprecedented opportunities for blacks in America to rise,” Brewer noted.

America, let this election be a call for all God’s people who are called by His Name to humble ourselves and pray together, and to seek His Face, and to turn from our wicked ways. Then He will hear us from heaven, and he will forgive our sins and He will heal our land.

7.) Human rights activist Chen Guancheng, who defected from China in 2012, had strong praise for President Trump’s courage and global leadership in dealing with the Chinese Communist Party.

“The U.S. must use its values of freedom, democracy, and the rule of law to gather a coalition of other democracies to stop CCP’s aggression,” stressed Chen.

“President Trump has led on this, and we need the other countries to join him in this fight, a fight for our future,” he continued. “Standing up to fight unfairness isn’t easy, I know. So does President Trump, but he has shown the courage to lead that fight.”

The human rights activist stressed, “We need to support, vote, and fight for President Trump for the sake of the world.”

8.) Ann Dorn, widow of retired African-American police captain David Dorn who was killed trying to protect a friend’s store amid the violent protests and looting in St. Louis in June, pleaded through tears for racial healing.

“I relive that horror in my mind every single day,” said Ann Dorn “My hope is that having you relive it with me now will help shake this country from this nightmare we are witnessing in our cities and bring about positive, peaceful change.”

“How did we get to this point where so many young people are so callous and indifferent towards human life?” she asked. “This isn't a video game where you can commit mayhem and then hit ‘reset’ and bring all the characters back to life. Dave is never coming back. He was murdered by people who didn't know, and didn't care, that he would have done anything to help them.”

“Violence and destruction are not legitimate forms of protest. They do not safeguard black lives. They only destroy them,” she continued. “We cannot heal amid devastation and chaos.”

“President Trump knows we need more Davids in our communities, not fewer. We need to come together in peace and remember that every life is precious,” said Dorn.

9.) President Donald J. Trump, accepting the Republican party’s nomination to run for a second term, said, “Despite all of our greatness as a nation, everything we have achieved is now in danger.”

“This is the most important election in the history of our country,” declared the president to thunderous applause.

“At no time before have voters faced a clearer choice between two parties, two visions, two philosophies or two agendas,” he explained. “This election will decide whether we save the American dream, or whether we allow a socialist agenda to demolish our cherished destiny.”

“This election will decide whether we will defend the American way of life, or whether we allow a radical movement to completely dismantle and destroy it,” he added.

The Republican National Convention concluded with what one commentator has called “the most Catholic moment in American history.”

“Ave Maria” – the “Hail Mary” prayer – was performed to close out the event.

Opera singer Christopher Macchio offered a beautiful rendition of the song, cherished by Catholics, from the Blue Room balcony of the White House after President Trump’s speech officially accepting his party’s nomination to run for reelection.