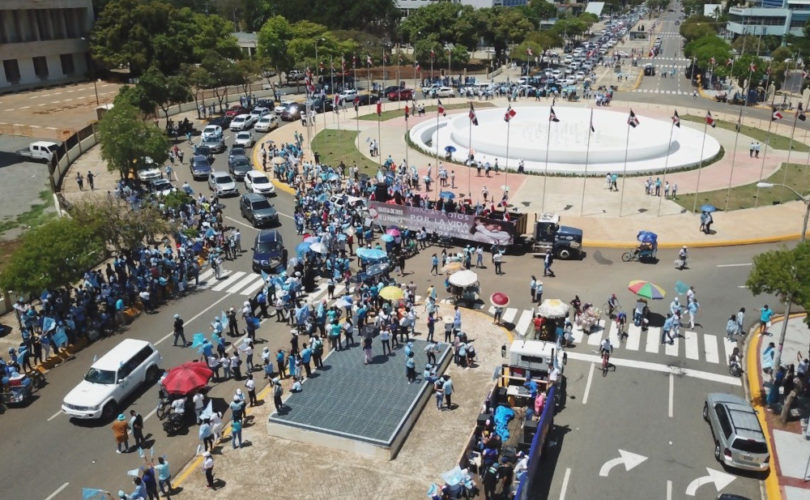 The bishop told LifeSiteNews that the “Caravana Celeste por la Vida” (Heavenly Caravan for Life) held in the nation’s capital city was “excellent,” with an “awesome” turnout.

“It was much more than we are expecting,” he said. “It was awesome because we were not expecting that many people.”

Masalles said the Catholics at the rally were joined by Evangelical communities, who bumped up the numbers. He was pleased also that all the Dominican Republic’s news organizations had reported on the rally — and its pint-sized opposition.

LifeSiteNews readers alone raised half the money needed to plan and execute the car rally through LifeFunder, and the bishop is grateful.

“I need to thank [LifeSite’s readers], for without that help, many of the activities could not be done,” he said. “We have to thank everybody — even those who gave just one dollar.”

“We had a competition of marches,” Masalles recounted. “One was the pro-abortion march, a very small group. [The media] was comparing. They said, ‘Wow, what a difference.’”

The car rally began in the parking lot of the soccer stadium and ended in the grounds outside the National Congress. The bishop said the area was full. “I think that there were 5,000 people,” he said.

A number of cars were late to the final meeting point because they got lost in the traffic in the city center. Santo Domingo has a population of over 3 million, and the biggest challenge of the rally was keeping the cars in the rally together. However, they all met at the National Congress at the end.

Organizers gave out pro-life hats, T-shirts and flags to everyone before they took part in the rally. The campaign also provided the participants with bottled water. At the end of the rally, the participants, legislators, and media were met by a large poster of a pregnant woman with a transparent woman, showing her unborn baby.

The rally was organized to stiffen the spines of the Dominican Republic’s pro-life representatives and senators regarding the new criminal code. A small but well-connected pro-abortion lobby has been pushing for the decriminalization of abortion, and Bishop Masalles told LifeSiteNews that battles over this have held up the modernization of the 120-year-old code for 20 years. Happily, there has been progress.

“Now regarding the project of the criminal code, the special commission [announced] that they have accepted the exception of abortion [to the revisions],” the bishop said.

The criminal code will now, without any proposed change to the nation’s complete ban on abortion, be presented to the representatives and senators.

“There was a lot of pressure from abortion groups, but now [their policies] are out. The discussion is going to be without abortion,” Masalles said. “It was a success.”

The car rally coincided with the end of a large, highly publicized two-week discussion about abortion in the Dominican Republic, which revealed that the country is still very pro-life.

“That was the last moment of this discussion, and that was excellent because it was in that precise moment what was necessary,” the bishop said. “It was like a great ending … and everybody was clear that the majority of the population is pro-life at this moment in the Dominican Republic.”

During Easter week, the representatives will vote on the new criminal code, and Masalles is very hopeful that it will pass without any more pro-abortion objections. Of the 190 representatives, 120 call themselves pro-life. A large majority of the senators are also pro-life.

The significance of the March 27 date for the rally, quite apart from the national discussion about abortion, was its proximity to the March 25 feast of the Annunciation, which celebrates the incarnation of Jesus Christ in the womb of His mother. Bishop Masalles said that the rally celebrated the occasion on the Saturday, rather than the Thursday, so as not to make traveling difficult for the public on a regular work day.

Masalles currently has an institution in his diocese to help poor pregnant women to prepare for motherhood, and he told LifeSiteNews earlier this month that there are many other institutions like it in the Dominican Republic. He is also committed to solving long-standing problems in his society, such as sexual harassment, teenage pregnancy, and violence through the “Alive to the World” (called Aprendiendo a querer in Spanish) program.

The bishop told LifeSiteNews that this life-affirming program reduces teenage pregnancy rates by 85%.