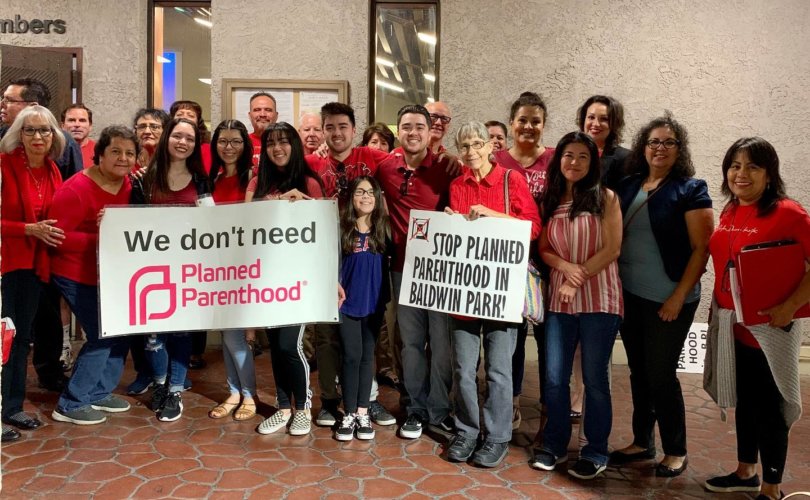 BALDWIN PARK, California, January 15, 2020 (LifeSiteNews) – Hundreds of pro-lifers joined a prayerful protest against a Planned Parenthood facility in California scheduled to open within weeks that will offer “abortion services.”

Led by Bishop David G. O’Connell, one of the auxiliary bishops in Los Angeles, more than 600 faithful walked in a candlelight procession on Monday evening from St. John the Baptist Catholic Church to the new facility located in Baldwin Park, less than half a mile away.

At the abortion mill, the bishop, priests and faithful consecrated the lands and the building, as well as the people, to Mary, the Mother of God. A large statue of Our Lady of Guadalupe, venerated by Catholics as the patroness of the unborn, and a Divine Mercy image were carried by the Knights of Columbus.

The consecration prayer, written by the Father Kolbe Missionaries of the Immaculata, asked Mary “that you do not allow the sin and scourge of abortion to continue in our city, our state, our nation, nor in the world.”

The faithful went on to entrust to Our Lady “this land, any buildings to be constructed upon it, and all the people who would enter it, especially unborn children and their mothers and fathers, and healthcare professionals.”

After the consecration, the bishop went around the building to sprinkle blessed salt as well as holy water on the property.

In a short homily, Bishop O’Connell remarked that “the sin of abortion is having a terrible effect on everybody,” including families. Pointing to Our Lady saying “yes” to receive “the new life beginning in her,” he called for a change of heart “in our country, in our Church, in our people – a change of heart to receive the gift of new life, of the unborn.”

Referring to the statue of Our Lady of Guadalupe, O’Connell told the faithful, “It’s beautiful that you bring her with us as we walk for life, stand for life.”

Father Michael Gutierrez, pastor of St. John the Baptist, encouraged the faithful to make the right decisions at the ballot box, saying, “We pray today, we vote tomorrow!” Speaking of politicians, he emphasized, “Make sure they are people for life! Pay attention to what goes on in your city!”

On January 22, the anniversary of Roe v. Wade, Planned Parenthood will be hosting local city officials for an open house at the new facility in Baldwin Park. Members of the pro-life movement will be protesting in front of the building from 8 a.m. to 12 p.m.

“Join us in showing them and all their invited supporters that they are not welcome. Life is sacred, and the culture of death surrounding Planned Parenthood is unwelcome and unwanted. Bring pro-life signs and posters,” reads a flyer handed out at Monday night’s candlelight procession.

Planned Parenthood has been implicated in sex trafficking. As LifeSite reported, “Seven clinics in four different states were found to be willing to participate in the exploitation of minor girls, supplying birth control, STD testing, and abortions to children who were being trafficked. And Planned Parenthood didn’t report any of it. Staffers even coached the traffickers on how best to avoid being detected by law enforcement, so that these young girls could remain in slavery.”

Twenty years ago, hundreds of pro-lifers successfully prevented a Planned Parenthood facility from opening in Monrovia, only minutes from Baldwin Park. The abortion center had been built and equipped, but numerous large protests led city officials to give in and buy for $800,000 the property where Planned Parenthood wanted to start performing abortions. The building was torn down, and the lot remains empty to this day.