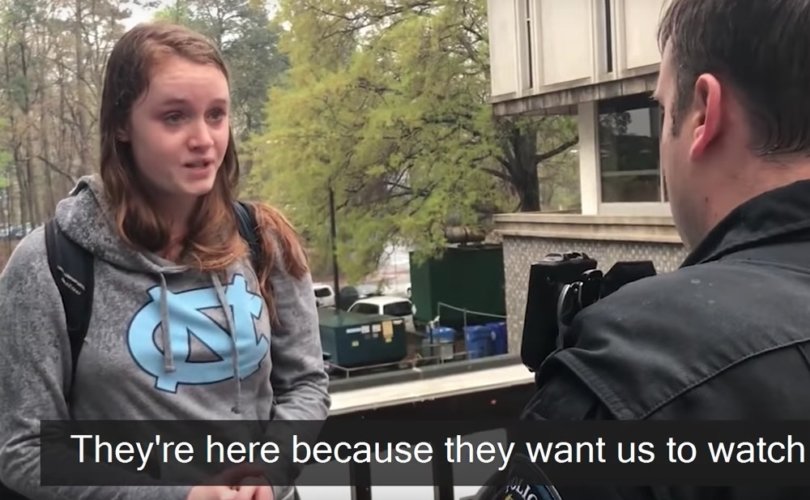 CHAPEL HILL, North Carolina, May 17, 2019 (LifeSiteNews) – A pro-abortion activist at the University of North Carolina at Chapel Hill was caught on video this week stealing a sign from campus pro-lifers, and her desperate attempt to justify her reaction to campus police is going viral.

On Tuesday, the pro-life group Created Equal released a video of an unidentified young woman in a UNC sweatshirt grabbing one of their signs and walking off with it, ignoring a pro-lifer who followed her to warn, “don’t steal the sign, you’re on camera stealing the sign.” He flagged down a campus police officer, who confronted her as she tossed the sign over a railing.

“Did you steal their sign?” the officer asked, to which the girl tried to claim she “just moved it.”

“Why’d you rip it out of his hands?” he continued. “Because this restricts women’s rights,” she answered. “He’s promoting lies on a college campus!” She gave back the sign, complaining that “I can’t believe y’all protecting them” as she attempted to leave, but the officer stopped her.

“You’re not going anywhere. Right now you’re being detained,” he explained. The shocked activist asked on what grounds, to which he answered, “Larceny, you stole his sign.”

The girl attempted to defuse her predicament by stating she was “not trying to get arrested.” Unimpressed, the officer asked her for identification and explained she was merely being detained at the moment while awaiting word from dispatch. After initially denying she was carrying an ID, she eventually relented, complaining that she “cannot believe these are the people who you protect.”

“Oh, I’m not trying to protect anyone, he explained, but I do have to enforce the law,” the officer said.

“Do you see us being subjected to this shit?” she asked. The officer explained that the pro-lifers had a right to gather in a public space and that she was free to not view it. “If you ignore them, that takes away their power.”

Later, the officer confirmed that the girl was being arrested for larceny. “All I did was I just walked it over here, I was gonna give it back to him,” she insisted. “I cannot believe this is happening. Is there something else I can do?”

“No, I just told you you’re under arrest,” he explained. “I cannot un-arrest you. The judicial system must do that.”

“College students who interfere with our First Amendment rights by assaulting us or stealing our signs are not the victims,” Created Equal president Mark Harrington told Fox News. “Universities are failing to educate students on the basic American ideal of freedom of speech.”

On its Facebook Page, Created Equal summarized the pro-abortion mentality at work here as, “Since we don't have scientific evidence to support abortion, we can at least steal the evidence that the other side presents.”

The Blaze noted that the incident came just days after another pro-abortion activist at UNC-Chapel Hill was filmed screaming obscenities and physically assaulting a Created Equal activist.