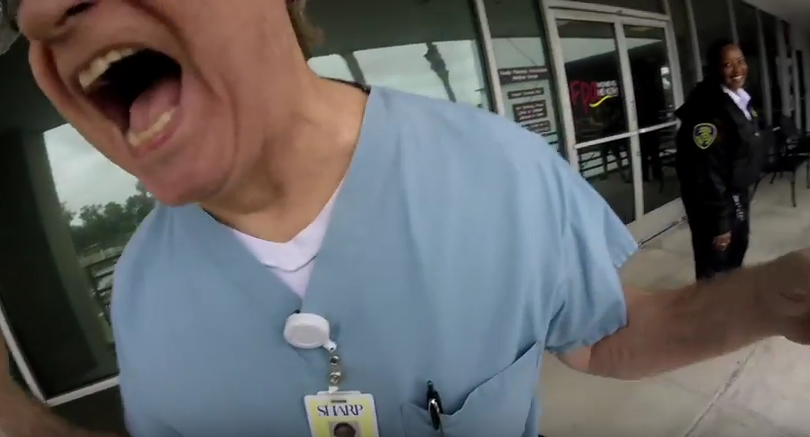 SAN DIEGO, CA, June 14, 2016 (LifeSiteNews) – A disturbing new video shows an abortionist get in the face of a sidewalk counselor, hold scissors at throat-level, and say he loves tearing babies apart in a guttural voice.

Pro-life advocates have posted a one-minute-long excerpt of an exchange with Dr. Robert Santella outside his Family Planning Associates abortion facility on Miramar Road in San Diego to YouTube.

Dr. Santella exits his office, holding a cup in his left hand and a large pair of scissors in his right.

A sidewalk counselor tells the abortionist that he needs to repent.

Santella jolts over and springs into the protester's face, breathing while making a menacing, throaty noise.

“That's pretty evil of you,” the counselor, who later calls himself Zephaniah, responds.

The abortionist then raises his right hand. A longer video posted from another vantage point shows Santella raising the scissors to approximately the same level as the counselor's neck.

“That's what you do to babies,” Zephaniah says cooly.

“Yeah, I love it,” Santella replies.

Zephaniah says he hopes that one day the abortionist will repent of his actions and accept the grace of Jesus Christ.

When Zephaniah tells the abortionist to “keep tearing the babies apart,” Dr. Santella responds, “I will…I love it. I love it!”

Eventually, a security guard, who identifies Dr. Santella by name, tells the abortionist he has a phone call and should return to the building.

In the longer video, one of Zephaniah's fellow pro-life activists, who is watching the bizarre exchange with Dr. Santella unfold, describes the abortionist's actions as “demonic.”

Santella's history shows a record of neglect that hurt women. In December 1983, the California State Board of Medical Quality Assurance suspended Dr. Santella's license for 60 days and put him on probation for five years after documenting that he injured three female patients and contributed to one mother having a miscarriage.