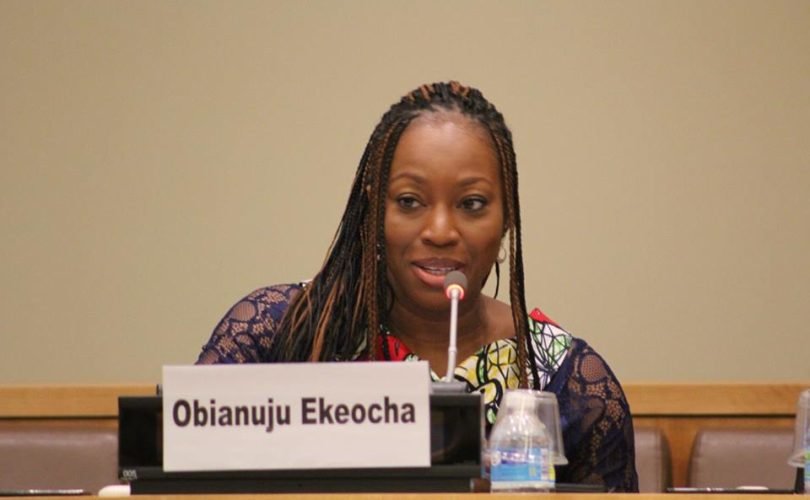 Obianuju Ekeocha, founder of Culture of Life Africa, speaks at the Holy See-hosted UN side event at CSW60 on maternal health care in Africa.

NEW YORK, April 5, 2016 (LifeSiteNews) – At the UN last month, an African pro-life leader schooled a Danish socialist on how Europeans and North Americans trying to persuade African nations to remove their anti-abortion laws is a new form of colonialism, not liberation.

The exchange between the two women took place at a conference on the status of women at the United Nations, following three presentations on maternal health care sponsored by the Holy See’s permanent delegation to the UN. During the question period following, Danish socialist Member of Parliament Mette Gjerskov told the audience of roughly 400 that she was “a bit provoked” by the claim one of the presenters had made that the current campaign by Europeans and North American governments and non-government organizations to persuade African countries to repeal their laws against abortion was “neo-colonialism.”

“My lesson learned …being from a colonizing society…is to allow the people to make their choices,” and “to freely decide over their own bodies, their own sexuality, how many babies they want, if they want contraception, if they want abortion. … The way to avoid a new colonization is to let people make their own choices.”

Obianuju Ekeocha, the London, England-based founder of Culture of Life Africa, called the Dane’s comment “amazing.” Ekeocha said that her native Ibo tongue and “most African languages, don’t even have a way of phrasing having an abortion that means anything good.”

“Neo-colonialism was occurring,” Ekeocha continued, when “people from the Western World try to give us this kind of language that we could never translate. They tell us it actually means something, that women can do something with their body that isn’t even morally bad.”

“Most of the African communities actually believe by their traditions and their cultural standards that abortion is a direct attack on human life,” said Ekeocha. Telling African women that belief is wrong is the same, she argued, as telling them that “what her parents, her grandparents, her ancestors taught her is actually wrong. You’re going to have to tell her that they have always been wrong, and that, madame, is colonization.”

Correction: The article's headline originally referred to Mette Gjerskov as a “UN official,” wrongly implying that she is employed by the United Nations.