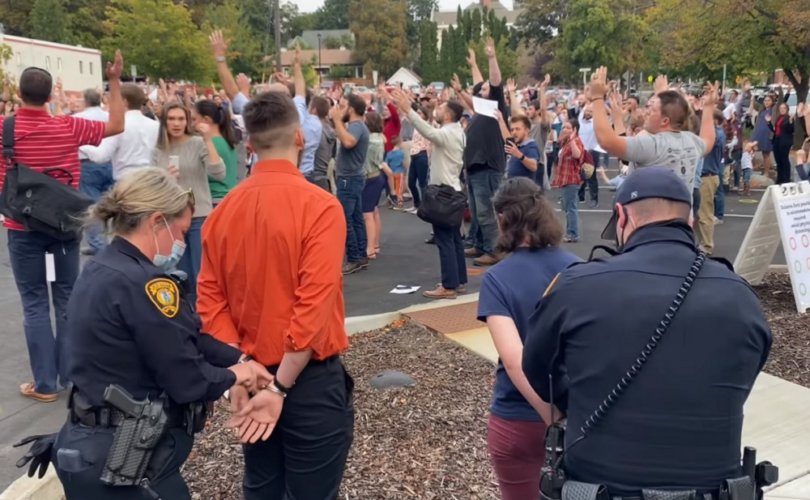 September 24, 2020 (LifeSiteNews) — A woman in Logan, Ohio, was tased and arrested for not wearing a mask while seated outdoors attending her son’s football game.

“Alecia Kitts drove an hour and a half from Marietta to Logan, Ohio to watch her son’s football game,” Jack Windsor at local newspaper the Ohio Star reports.

In shocking video, a police officer approaches Kitts while she is seated with her family and attempts to place handcuffs on her. The officer proceeds to grapple with Kitts for two minutes, attempting to apply the handcuffs while she insists she has nothing wrong. After two minutes, the officer applies a taser to her back, with Kitts shrieking as she falls from her seat to the ground and onlookers who had until that point remained silent rising to object to her treatment. The officer then handcuffs Kitts and escorts her from the stadium.

“There is no reason to tase someone and arrest them for not wearing a mask,” Kennedy said.

Meanwhile in Moscow, Idaho, three people were arrested for breaking social distancing rules during a local church’s singing protest against the city’s mask mandate, which requires masks to be worn in both indoor and outdoor settings when social distancing isn’t possible. The event was reportedly attended by about 150 people who en masse sang psalms in beautiful harmonies.

Incredible videos from the event show police officers arresting local music teacher Sean Bohnet and his wife Rachel, as well Gabriel Rench, a host of a Christian political YouTube talk show and a candidate for county commissioner, while their fellow churchgoers continue to sing.

The website of local news outlet the Moscow Report has today gone down after being overwhelmed by visitors to the site viewing videos from the event.

One of the videos shows Bohnet and Rench explaining to police officers that they will not comply with a police order — which can’t be heard over the singing around them. According to the Moscow Report, the “crime” for which the couple were arrested is that they refused to show the police any identification.

The married couple were subsequently handcuffed by police as their church community sang “Praise God from Whom All Blessings Flow.” As police escort them from the site, other attendees at the event can be heard encouraging them.

“So save us Lord our God and king, as we in trouble call thee,” the attendees sang as Rench was handcuffed and escorted to a police vehicle by officers.

“You guys should not be doing this,” Rench told the officers, “and doing this kind of crap for the mayor, this is embarrassing. You guys are stronger than this.”

In Victoria, Australia, where police have gained worldwide notoriety for their aggressive enforcement of a draconian lockdown regime, a video has emerged of a 69-year-old grandmother being arrested while attempting to film another woman being arrested for refusing to wear a mask.

The 69-year-old woman became extremely distressed when police officers took her phone and placed her in handcuffs. After eventually being released, the woman then broke down and began sobbing on the ground after being interviewed by local media.

Australian politician Craig Kelly, M.P. posted the video on his Facebook page, saying: “Many will find the degree of distress that this grandmother experienced in itself highly distressing.

“But if you are both a sociopath and psychopath and share #I’mWithDan and you love big authoritarian government, you’ll probably get some twisted pleasure from this — and you’ll selfishly delude yourself this [is] ‘keeping YOU safe.'”

On June 8, 2020, the World Health Organization published a document stating that “the widespread use of masks by healthy people in the community setting is not yet supported by high quality or direct scientific evidence.”

“This is not about public health” LifeSiteNews co-founder Steve Jalsevac said in response to the videos. “This is about intimidation and controlling the global population.”