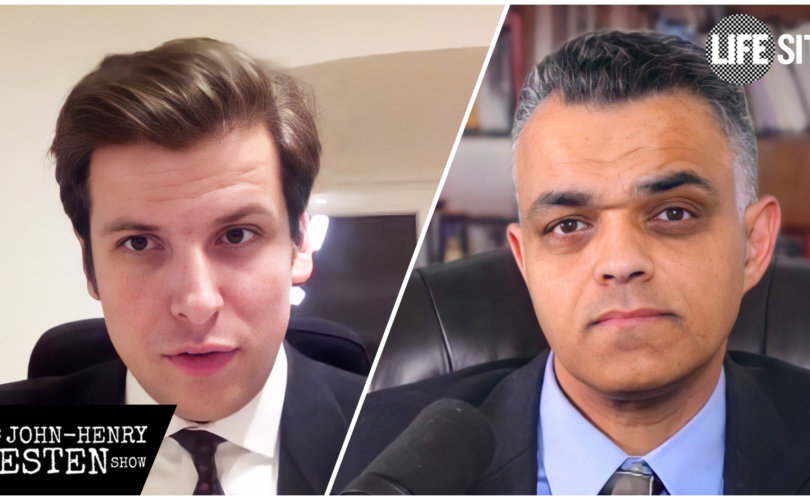 VIENNA (LifeSiteNews) — As unvaccinated people in Austria are being threatened with heavy fines and jail sentences by their own government, LifeSite’s John-Henry Westen spoke with Austrian Catholic activist Alexander Tschugguel from Vienna who warned that “Austria is [being] used as an example … to introduce forced vaccinations all around Europe.”

Tschugguel is most famous for having tossed several “Pachamama” statuettes into the Tiber in 2019 as well as for his many actions in defense of traditional Catholic teaching.

More recently, he has also become one of the leading figures of opposition against lockdown measures and forced vaccination policies in Austria.

Tschugguel and Westen discussed recent efforts by the Austrian government to impose forced injection with the abortion-tainted, experimental gene therapy products currently marketed as “vaccines” against COVID-19 on the entire Austrian population.

News reports have been circulating in Austria about a new bill which was debated in parliament earlier this month, and which sets out the details for the enforcement of penalties against people who refuse to be injected with the experimental drug.

“You [will be] an illegal in your own home country if you decide not to take an abortion-tainted, [inefficient], side-effect [inducing], so-called vaccine,” Tschugguel explained.

He quoted Austrian Constitution Minister Karoline Edtstadler who said in an interview with Austrian news channel PULS 24 that “with the introduction of the vaccine mandate, it is actually against the law to live in Austria without being vaccinated.”

Edtstadler also spoke of “further consequences,” for those who refuse to comply with the mandate.

Indeed, the new text of the bill mentions heavy fines for the unvaccinated which, as Tschugguel explained, most Austrians cannot afford to pay based on the country’s average income.

The new bill also includes jail sentences which can be extended to a maximum of one year for those who remain unvaccinated and are unable or unwilling to pay the heavy fines.

Even more shocking, the text of the bill specifies that, unlike with regular prison sentences, unvaccinated prisoners will have to cover the prison costs out of their own pockets and will be kept “separate” from other inmates.

Tschugguel saw the potential for separate prisons for unvaccinated people and compared this to the quarantine camps which now exist in Australia.

“People who go to prison as unvaccinated cannot go to the same prison as the vaccinated, so, we already see this Australian thing here as well,” he said. “They will erect special camps.”

Four of the five major Austrian political parties have already expressed their approval to the new measures, which are expected to be implemented early next year, with only the Freedom Party (FPÖ), Austria’s right-wing populist party, objecting to the bill.

“They all accepted it, except one party, the Freedom Party, they are the ones who are fighting against this, but all the others accepted it,” explained Tschugguel.

To date, it is estimated that one third of Austria’s population of less than 9 million remains unvaccinated.

The pro-life activist saw in the high proportion of unvaccinated people one of the reasons for the drastic measures.

“Austria is [being] used as an example to break people’s mind, to break them psychologically, to use us as lab rats and to introduce forced vaccinations all around the European Union and all-around Europe as well,” he said.

“There is a reason why they introduced it in Austria,” he then argued, explaining that the new tyrannical measures were all made possible through the introduction of a new “vaccine registry” last year.

He explained that the new vaccine registry was linked to the passport data of Austrian citizens.

“The passport data is obviously visible for everyone working for the state,” said Tschugguel, who pointed out that this system is something unique to Austria.

In spite of the totalitarian nature of the measures threatening him and millions of other Austrian citizens, Tschugguel remained hopeful and optimistic, saying he felt encouraged by the size of the demonstrations against the mandate, which, according to him, have gathered hundreds of thousands of people, a number never equalled before in the history of the small nation, whose total population equals that of New York City.

The young Austrian was also encouraged by the sizable proportion of Catholics who have taken part in the peaceful protests in the past few weeks, reciting the rosary; as well as by the fact that more and more non-Catholics have joined in the recitation of the rosary during these demonstrations.

“For a few weeks [we’ve had] more and more non-Catholics joining us praying the rosary. Just imagine this. I would never have expected to see this in my life,” he said.

“I think this is the greatest opportunity for evangelization the church has probably ever seen,” commented Westen.

Tschugguel also cited the victory obtained by Austria against communism in 1955, which Catholics often attribute to Fr. Petrus Pavlicek’s rosary crusade at the time and compared that situation to what Austria is currently facing.