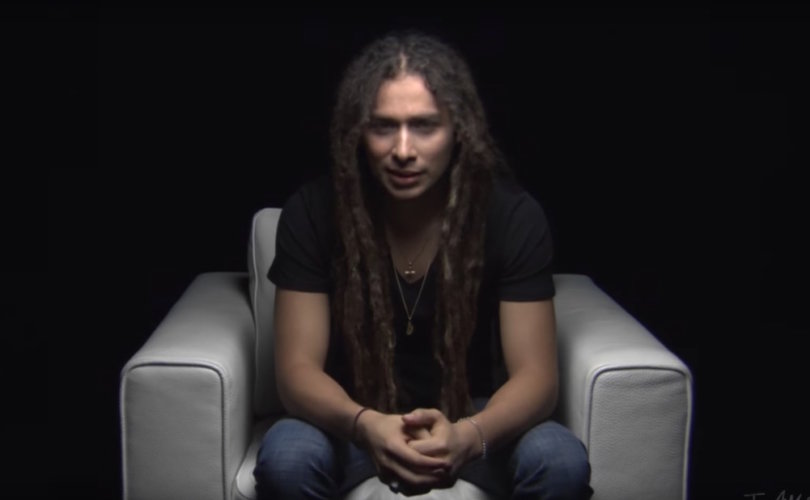 DALLAS, September 27, 2016 (LifeSiteNews) – Just as his career as a nationally renowned singer was taking off, his addiction to pornography nearly cost “American Idol” star Jason Castro his marriage – twice.

Castro, whose music appeals to Christian audiences, made it to fourth place in the competition and soared to the top of the iTunes downloads when he covered Jeff Buckley’s song “Hallelujah.”

But he carried a secret that began to consume more of his time and attention: In high school, he had begun watching pornography on his computer. With the privacy of college, he began to classify his use as an addiction.

“It was keeping me depressed,” he said. But he couldn’t stop.

While on tour, he cheated on his girlfriend, Mandy Mayhall, and had sex with a woman he hardly knew.

“It’s just the next step” in the addiction, Castro said in the 12-minute video released last Wednesday. “It wasn’t on the computer. It was in real life.”

Eventually, he came clean about his infidelity, and Mandy ended their engagement.

Castro said he kept his promise by installing porn-blocking software on his computer.

Then he got a smartphone.

“Now, it was easier than ever. Now it was in my pocket, anytime I wanted, anywhere,” he said.

He would feel a need to begin every day with pornography. Soon, his wife blamed herself for the coolness in their relationship.

After receiving months of church counseling, the singer finally came clean and, to his surprise, Mandy stayed by his side. Gradually, he became accountable to his wife, speaking truthfully to her everyday about his compulsions, impulses, and stumbles.

“She understands that it's a struggle that we have and this struggle might never go away. It's part of my flesh,” he said, “but I've been able to overcome it.”

The video, which the ministry “I Am Second” shot sometime in 2013, reveals that the couple had a second daughter after its filming. Updates show that Castro his trademark dreadlocks, which he’s worn since high school, for a shorter, more conservative hairstyle.

“Because of Jesus Christ, I’m a free man,” he said.

American Idol’s Colton Dixon: ‘More meaningful’ to save sex for marriage
American Idol contestant: I was told to abort my baby, but she’s ‘the best thing that ever happened’
American Idol Winner Defends Sexual Abstinence