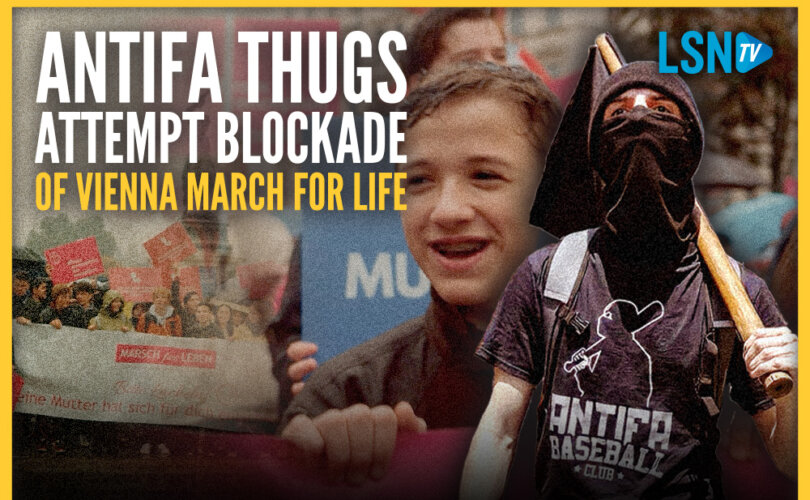 VIENNA (LifeSiteNews) — Despite constant rain and attempts by an Antifa group to sabotage the event, around 1,500 participants took to the streets of Vienna, Austria to stand up for the unborn at the annual March for Life late last month.

While the pro-life demonstration was ultimately a success, members of the far-left group Antifa temporarily blocked the marching route of the event for the unborn, with some of the counter-protesters forming a blockade on the street while using Bengal lights (thick sparklers with wooden stems that burn with a green or red light) and firecrackers.

The Vienna-based Antifa group had announced their plan to protest the pro-life march on their Twitter account, saying that they were going to “give hell to the March for Life,” while posting a picture with a banner that read “Hell for those who believe in it.”

The radical group also held up a sign with a blasphemous, anti-Christian message that said, “If Mary had had an abortion, we would have been spared you,” while chanting the anarchist slogan “no God, no state, no patriarchy.”

Ultimately, members of law enforcement managed to remove the protesters, and according to a police report, 30 arrests were made under administrative law and 48 charges were filed under the Assembly Act.

Despite the attempts by the so-called “Antifascists,” the march was an overall peaceful event with a joyful atmosphere, according to those in attendance.

Many young people and several priests were among the participants, including Austrian Bishop Klaus Küng who gave a short speech at the beginning of march.

The speaker for the March for Life in Vienna said he was very happy with the event and that he was glad that so many came, despite the rainy weather.

“We brought the super important message out to everyone; we want to love them both. We want to love the child, who has the right to life from conception. We don’t make any exceptions,” he said.

One of the participants told LifeSiteNews in an interview that the people were gathered as a way of giving a voice to unborn children, who cannot yet speak for themselves.

Another participant of the march said:

It’s important to realize that every life, even the womb, the unborn baby, and the mother, are so important. And we are here to celebrate life but also to say yes to every life: to the old, to the young, to the unborn. And that’s why I’m here to stand there and to say, as a woman: I love every child and every child should have the right to live.

Other pro-lifers also chimed in to give their thoughts on the march, with one young woman stressing that “it’s important to show that unborn lives matter and that there are people out there who are willing to help. That they are there to support women and families in need.”

“It’s really hard with the media because they make it seem like everyone is ‘pro-choice.’ But seeing this many people here shows that there are many people, that are our age, that are young, who are pro-life and care about life,” another woman added.

Catholic activist Alexander Tschugguel, who became well-known after throwing the infamous pachamama statues into the Tiber river, served as one of the event’s organizers and was also present at the march.

When asked about the recent FBI raids happening in the U.S. and the persecution of pro-lifers more broadly, Tschugguel said that there is an attempt to frame people who defend life as terrorists.

“It’s a calculated idea to frame people, who stand up for the main ideal sanctity of life, as terrorists. That’s the whole idea. So, they organize actions like this, what the FBI did in the United States or here also, to try to frame us as people who are actually against democracy,” stated Tschugguel.

“On the other side [referring to the pro-abortion activists] we have chaos, we have destruction and we have hate. So, I think I know who the terrorists really are, and it’s definitely not us,” he added.

Tschugguel also mentioned that becoming a father himself has emboldened him even more in his pro-life views, serving as a source of strength in the fight for life.