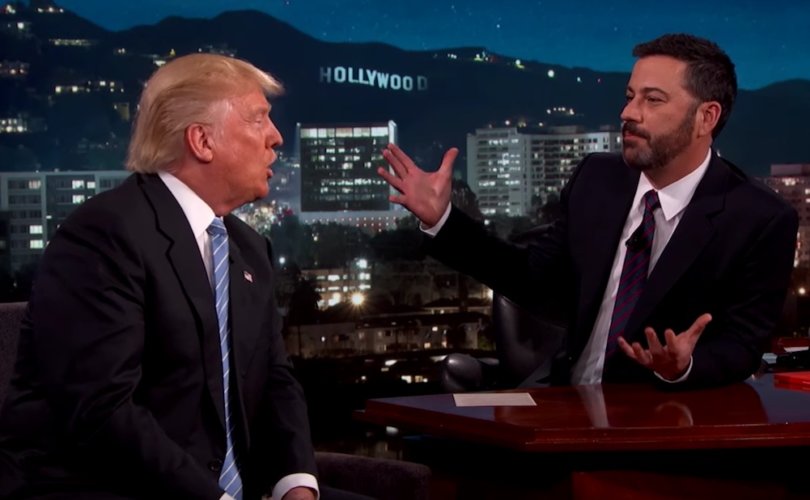 HOLLYWOOD, May 26, 2016 (LifeSiteNews) – When late night talk show host Jimmy Kimmel tried to pin down Donald Trump about his position on transgender bathroom laws, the response he got became a laugh line.

On last night's “Jimmy Kimmel Live,” the comedian asked the presumptive Republican nominee about his position that transgender people should be able to use the restroom of the sex with which they identify.

The billionaire replied that he believes the issue should be determined by voters or local officials. He repeated the phrase “let the states decide” five times in one minute, 14 seconds.

The number of transgender Americans is “a very, very small group – right now,” he said. “Perhaps it's getting larger.”

He added that the Republican Party “generally believes that whatever you’re born, that’s the bathroom you use.”

After Kimmel followed up about the candidate's personal views, Trump again said states should settle the matter, “and I think the states will do, hopefully, the right thing.”

When Kimmel asked what he personally thought the “right thing” is, Trump replied, “I don’t know yet,” provoking audience laughter.

That position contradicts Mr. Trump's initial reaction to the question during a question and answer period on NBC's “Today” show on April 21. As controversy began to brew over North Carolina's H.B. 2, he said the state should not have legislated the matter.

“Leave it the way it is,” Trump said. “People go, they use the bathroom that they feel is appropriate.”

The state's bill overturned a local Charlotte city ordinance, which changed the status quo by requiring private facilities to allow anyone who said he identifies as a transgender to use the private facilities of the opposite sex.

Trump later told Matt Lauer that Bruce Jenner, who has legally changed his name to Caitlyn, could use the restroom of his choice at Trump Tower. Jenner later posted a viral video of himself doing so.

Mr. Trump rolled out his official, federalist position on the issue the evening of this “Today” show interview.

He has since said that he would reverse Obama's national transgender restroom policies and leave the matter to states or municipalities.

On Monday, he told Fox News host Bill O'Reilly that the Obama administration's controversial federal guidance forcing schools to let biological males shower next to biological females “is not alright.”

The billionaire business mogul also revealed a practical reason he opposes instituting new, gender-neutral restrooms in public accommodations, like his many properties.

“Frankly, it would be incredibly expensive,” he said. “I think our country really wants to be spending money on other things…and frankly, the number of people we're speaking of is an unbelievably small number.”

Kimmel concluded the transgender discussion by saying, “This is the stupidest thing to be focused on.”