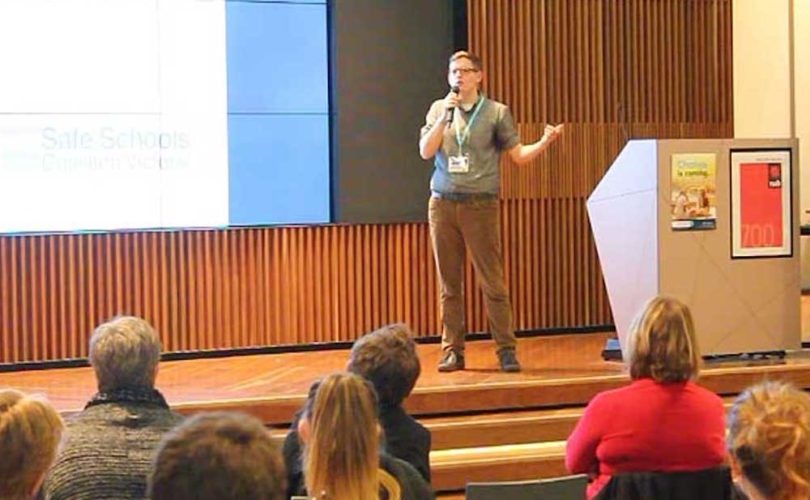 MELBOURNE, March 18, 2016 (LifeSiteNews) – Undercover video recorded at the 2014 Safe Schools Coalition National Symposium has exposed as a lie the claim that the program is about helping students stand up to bullying in schools.

The symposium was a launch event for the contentious Safe Schools programme, which has come under sustained attack during its existence.  Ostensibly a programme to protect gay and transgender school students from bullies, critics such as MP George Christensen have referred to it as “Queer theory being taught in the classroom.”

The source of the video recording spoke exclusively to LifeSiteNews, requesting anonymity for fear of retribution.  He says, “I didn't review my footage carefully enough to begin with, and so I didn't realise I was sitting on a bombshell for 18 months.”   The resurgence of the issue in the media prompted him to go through the footage again.  Speaking of the moment of realisation of what he had recorded, he says, “I was shocked because I didn’t think someone well organized on the political left would be so clumsy as to make a statement like that and expose their true agenda.”

Fear of retribution towards those opposing the programme is not unfounded.  Supporters of the scheme lashed out today with a violent protest at Senator Cory Bernardi’s office just before it was formally announced that the government was cutting out huge sections of the programme.  The Safe Schools Coalition organisation would have to accept these changes if they were to continue receiving federal funding.  They are presently reviewing the government report.

Christensen, speaking to ABC News, said “essentially we're gutting most of the bad content that actually these people wanted to remain in place.”  Shadow minister for education, Kate Ellis, responded along the bully line stating, “How do we expect any student in the school yard to stand up to bullies if Australia's own Prime Minister (Turnbull) can not stand up to the bullies within the fringe of his own party.”

The “fringe” that Ellis was referring to is in fact the majority of the coalition government members who, according to Christensen, have signed his petition for the Safe Schools Coalition to be defunded.

Both Christensen and Senator Cory Bernardi have been pushing for a full parliamentary inquiry into the programme with all funding to be suspended pending the outcome.

The Victorian state government has indicated it will make up for any federal funding cuts to the Safe Schools Coalition programme.  If this promise of funding is fulfilled, it would negate the need to abide by the latest cuts to the scope and content of the programme.