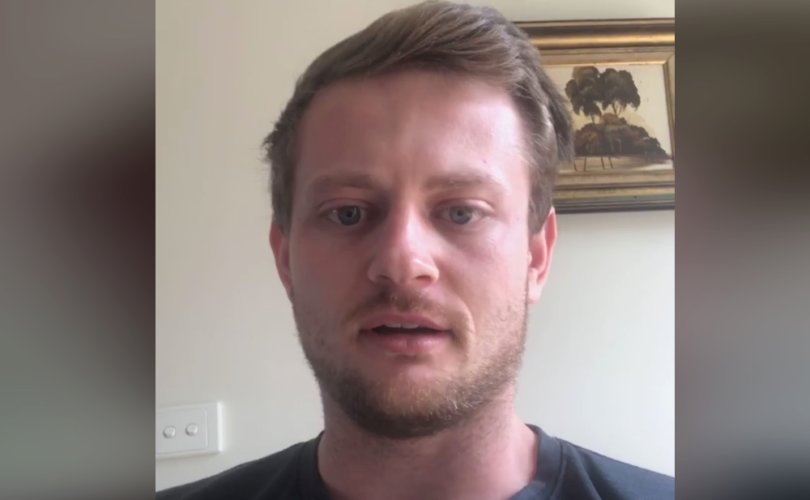 James Bartolo in a Sept. 3, 2020 Facebook video after police broke down his door and arrested him, Melbourne, Australia.

MELBOURNE, Australia, September 4, 2020 (LifeSiteNews) – Police in Victoria, Australia, smashed the door down of a man’s home and arrested him for allegedly promoting anti-lockdown events online.

James Bartolo, formerly a soldier in the Australian Army, filmed police arriving at his home in Melbourne, breaking down his door with a battering ram and arresting him on the morning of Sept. 3.

Like Zoe Buhler, the pregnant mother arrested at home by Victoria Police officers earlier this week, Bartolo was arrested for ‘incitement’ after publicizing an anti-lockdown protest this coming weekend.

A police statement said the arrest occurred “following an ongoing investigation into the organization and encouragement of protest activity in the CBD this Saturday”.

A police spokeswoman said that police seized several devices including a mobile phone and laptops, as well as five samurai swords, from Bartolo’s home.

“A 27-year-old male who was arrested at the address has been charged with incitement, possession of prohibited weapons and two counts of resisting police,” the spokeswoman said.

Since his release from police custody, the activist has posted online saying that the anti-lockdown protest scheduled for tomorrow in Melbourne is a “no go” and that he is telling people not to attend because he is “concerned about the safety of the brave men and women who plan to go.”

Bartolo said his bail orders required him not to speak publicly about anything related to the coronavirus or protests.

“The police are not forcing me to say anything. Although my bail orders say that I cannot speak about anything related to coronavirus or protests,” he wrote in a Facebook post earlier today.

While Victoria Police have been gaining worldwide attention for their heavy-handed treatment of those not complying with lockdown restrictions, a Royal Commission investigation into the Management of Public Informants has identified 124 criminal convictions in Victoria as “tainted” due to the police using evidence given to them by barrister Nicola Gobbo about her own clients. Victoria Police have this week issued an apology and admitted that they were “profoundly wrong” to allow Gobbo to inform on her own clients.