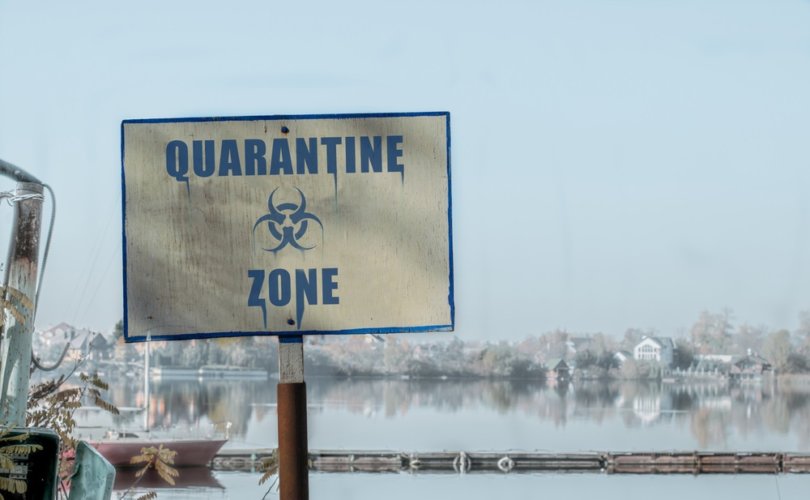 DARWIN, Australia (LifeSiteNews) — An Australian woman says she was taken to a quarantine facility and held there for 14 days against her will as punishment for failing to test against COVID and lying about it.

Haley Hodgson shared her ordeal in an interview with Monica Smit, founder of Australian news website Reignite Democracy Australia (RDA), a week ago when she was still in quarantine at the Howard Springs facility near Darwin, Northern Australia.

“You can get sent to those camps no matter what if you’re ‘close contact’.”

The video was released only yesterday on RDA’s official website, as Hodgson feared that releasing it sooner might result in the extension of her stay at the quarantine camp.

Hodgson explained that she had been in “close contact” with someone who tested positive for COVID-19.

She recalled that health officials came to her house asking whether she knew the person who tested positive and if she had had a test done.

Hodgson initially lied about having had a test. When the Australian health authorities got back to her saying they couldn’t find her result, Hodgson admitted that she had failed to do a test.

“I was scared. I’ve been in quarantine before, [and] I just didn’t want to go back there,” Hodgson explained.

She then apologized to the health officers, saying, “I’m sorry that I lied.”

“They said, ‘No worries,’ and [before] they hung up the phone, they said, ‘Someone will be there to test you in the next 20 minutes, so don’t leave your home,” Hodgson recalled.

Within 20 minutes the police were at her house. Hodgson said they told her that she had to go with them and that she was “going to Howard Springs to quarantine.”

Hodgson said she told the police that she had not been informed of this, and the police replied that if she refused to come, she would have to pay a $5000 fine (roughly $3600 U.S.).

She then agreed to follow the police officers and was escorted to a “COVID cab” which took her to Howard Springs. On the way there, one of the police officers allegedly told Hodgson that she would need to quarantine for only 48 hours while awaiting the result of her COVID test.

But once at the facility, Hodgson said, she was informed that she would have to stay there for 14 days “no matter what” and that she “[had] no choice.”

“So, I’m here against my will,” the woman said.

Smit asked why Hodgson wasn’t given the option to self-quarantine at home, especially when the 7 to 10 other close contacts of the person who tested positive were all allowed to self-isolate at home.

“That’s what I was [asking] them,” replied Hodgson.

“Now that I’ve found out, it’s because I said I had a test done when I hadn’t,” she continued.

“So, it’s pretty much a punishment; they’re punishing me because I lied and said I had a test when I hadn’t.”

Hodgson went on to describe the harsh rules at the quarantine facility. Inmates are not allowed out of their rooms, except for certain chores such as laundry, and have to wear a mask.

“It’s so strict, you can’t do anything. You can’t go for a walk. You get anxious [because] you’re trapped in a small room,” said Hodgson.

“You can go out on your balcony, [but] you have to wear a mask. That’s all you can do. There’s nothing else.”

Hodgson recalled that when she asked to go for a walk, arguing that she needed to exercise and was feeling trapped and anxious, the staff offered her a strong anxiolytic [anti-anxiety drug] instead, telling her: “No, you’re not allowed to do that, but we can give you Valium to calm you down.”

The young woman remarked on the paradoxical lack of oversight.

“There’s no paperwork when you come in here; you’re literally chucked in this little box, and that’s it, you’re left [on your own],” she explained.

Her interviewer Monica Smit then remarked that she herself had been to prison and compared the conditions at the quarantine camp with conditions in prison. She suggested that Howard Springs “actually sounds worse than prison because you have this illusion of being a free person, but actually you’ve got no freedoms.”

“In prison, [inmates] can walk wherever they want, by the way, and they don’t have to wear a mask, and they can go to the gym on prison campus,” said Smit.

Hodgson concluded the interview by warning the public about these quarantine facilities and stressing the ease with which a person can be transferred there even against his or her will.

“These COVID camps are real, [and] there’s one being built in Melbourne now,” she said.

Howard Spring is the same quarantine facility where 38 people from a remote Aboriginal community were sent earlier this week after some people there tested positive for COVID-19.