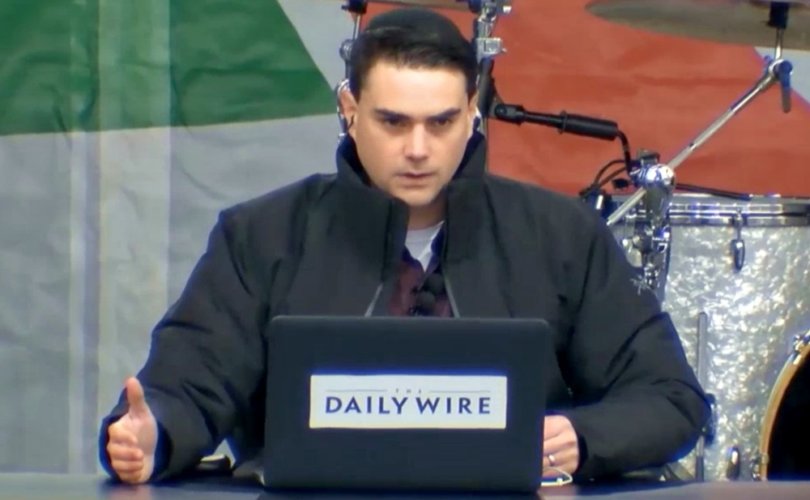 WASHINGTON January 19, 2019 (LifeSiteNews) – Conservative commentator Ben Shapiro responded to Canadian Prime Minister Justin Trudeau’s claim that pro-life people are not “in line…with society,” telling the massive crowd at the Washington D.C. March for Life on Friday that such criticism was actually a “good” thing.

“Maybe they're right. Maybe we today here are not in line with the rest of society,” Shapiro said. “To which I say, 'good.' So were the abolitionists. So were the civil rights marchers. So were the martyrs in Rome and the Jews in Egypt.”

“Righteousness doesn't have to be popular; it just has to be righteous,” he added to thunderous applause.

“Of course, you're more than allowed to have whatever beliefs you like,” Trudeau said, “But when those beliefs lead to actions determined to restrict a woman's right to control her own body, that's where I, and I think we, draw the line as a country. And that's where we stand on that.” He said his government has no obligation to “fund organizations that are determined to remove rights that have been so long fought for by women.”

Trudeau dismissed as a “kerfluffle” the backlash that came after Canada Summer Jobs grant applicants were required to check a box on their forms that affirms their support for human rights that include “reproductive rights,” in other words, abortion.

During his speech at the March for Life, taking place at the National Mall, Shapiro assured the crowd that, despite the mainstream media's best efforts, their stand for life would not be forgotten.

“And most of all, God. The God who built and preserves nations, who brings life and maintains it, who stands with those who suffer most at the hands of evil. He will remember us too. He will remember America and he will bless her. God will bless us, because we are the guardians of His most precious creations. We stand between America and the darkness, and we will march until that darkness is banished forever, and all of our children can stand together in the sunlight,” he concluded.

Ben Shapiro full comment on pro-lifers not being “in line”

Well, you know what? Maybe they’re right. Maybe we today, here, are not in line with society.

We do live in a time when the Democratic Party has embraced abortion as a sacrament, and, by the way, at a time when many in the Republican Party spent years pledging to defund Planned Parenthood and then didn't do it when they were given the power to do so.

We live in a time when pro-life nations around the world are loosening their own restrictions on the killing of the unborn.

So perhaps, we are out of line with the rest of society – to which I say, ‘good’.

So, were the abolitionists, so were the civil rights’ marchers. So were the martyrs in Rome and the Jews in Egypt.

Righteousness doesn't have to be popular. It just has to be righteous.