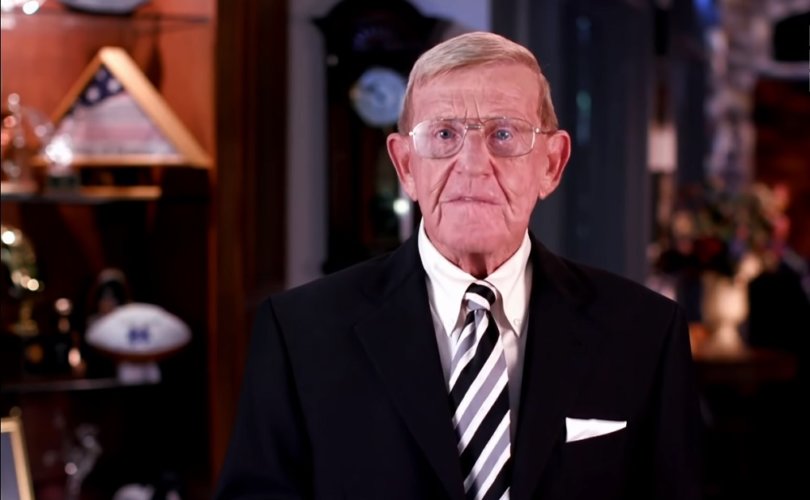 WASHINGTON, D.C., August 27, 2020 (LifeSiteNews) — A legendary Notre Dame football coach said that “the Biden-Harris ticket is the most radically pro-abortion campaign in history” and that Joe Biden is a “Catholic in name only,” while “nobody has been a stronger advocate for the unborn” than President Donald Trump.

“I believe President Trump is a consistent winner, an outstanding leader, and deserves to be reelected as our president,” declared Hall of Fame former football coach Lou Holtz at the outset of his speech at the Republican National Convention.

“When a leader tells you something, you’ve got to be able to count on it,” said Holtz. “That’s President Trump.  He says what he means, he means what he says, and he’s done what he said he would do at every single turn.”

Holtz said that one of the important reasons President Trump has his trust is because “nobody has been a stronger advocate for the unborn.”

“The Biden-Harris ticket is the most radically pro-abortion campaign in history,” he declared. “They and other politicians are Catholics in name only” who “abandon innocent lives,” while “President Trump protects those lives.”

Holtz said President Trump exemplifies the virtues of trust, commitment, and love, while asserting that they are absent from Democrat candidate Joe Biden’s character.

“Can you imagine what would’ve happened to us if President Trump had not shown up in 2016 to run for president?” asked the famed coach. “I’m so glad he showed up.”

“I encourage everyone who loves this country — who loves America — to show up in November for President Trump,” urged Holtz.