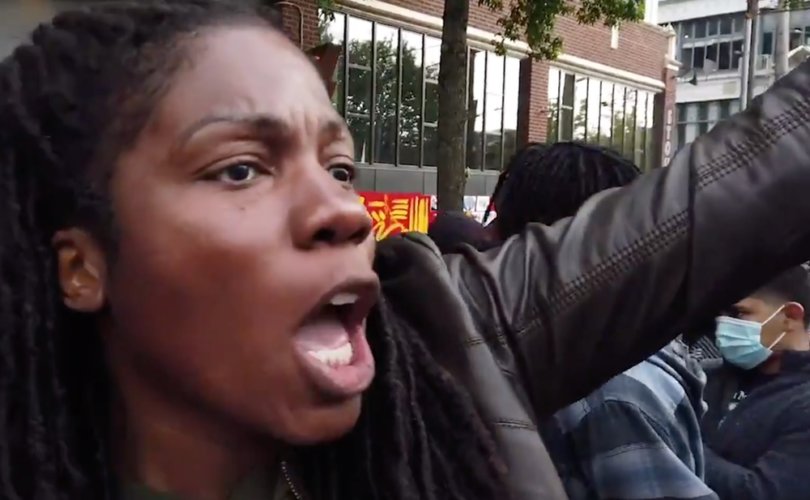 SEATTLE, WA, June 19, 2020 (LifeSiteNews) ― Video footage has emerged of a courageous black woman inside CHAZ territory, the six square blocks in Seattle taken over by rioters, telling Black Lives Matter demonstrators that abortion giant Planned Parenthood is the “number one killer of the black population.”

“Why don’t I see my brothers and my sisters outside Planned Parenthood?” Edmee Chavannes shouts to a crowd assembled in the so-called Capitol Hill Autonomous Zone (CHAZ) or Capital Hill Occupied Protest (CHOP) in Seattle.

“We need you all there. Number one killer of the black population is Planned Parenthood,” she continued.

“I don’t see Black Lives Matter in front of a Planned Parenthood.”

Chavannes herself was arrested outside a Planned Parenthood business with Bevelyn Beatty in New York on May 30 after being accused of violating “social distancing” regulations. The co-founders of the pro-life At the Well Ministries, Chavannes and Beatty had been persuading women not to have abortions.

A racial slur with roots in the 19th century, the word “coon” is now used by some African Americans to denote black people they perceive as defending white racism.

“Haven’t you heard that word?” sneered the young demonstrator.

In her exhortations, Chavannes stressed the hypocrisy of the Black Lives Matter movement. She pointed out that even if the demonstrators succeeded in abolishing police, the black community “would still kill [their] babies.” She also suggested that the disproportionate rate of abortion in the black community and of black-on-black violence had a common source.

“You get rid of the police, and we’ll still kill one another,” she said.

When confronted by a black man, she agreed that black people had been oppressed in the past, but that since then they had “lost [their] way.”

Black men also have lost their way, she added, saying that although they used to fight for their families, they now “just impregnate women and take them to the Planned Parenthood clinic.”

Mixed-race Ryan Bomberger of the pro-life Radiance Foundation told LifeSiteNews via email that Chavannes is right about the hypocrisy of the Black Lives Matter movement and that the organization is “racist.”

“The Black Lives Matter movement’s leaders announced solidarity with the abortion industry back in 2015; they actively partner with and defend the leading killer of black lives—Planned Parenthood,” Bomberger said.

“A black immigrant female preacher calls out the hypocrisy on abortion, the epidemic of fatherlessness, and the need for God and she gets called a ‘coon’ by a BLM activist!” he continued.

“That truly sums up the blatant ignorance of a confused and racist movement. Clearly, only some #blacklivesmatter.”

Part of Radiance Foundation’s mission is to bring public attention to the disproportionately high abortion rate among African-Americans. Black women in the USA are five times more likely than white women to have abortions.  According to the Foundation’s “Too Many Aborted” campaign, “over 330,000 deaths of unarmed black lives in the womb happen every year.” In New York City, they say, more black babies are killed than born: 1,180 abortions for every 1,000 live births.

Margaret Sanger, the founder of Planned Parenthood, was a racist eugenicist who hoped to diminish the numbers of African Americans through a targeted birth control program called “The Negro Project.” She began this program with the Birth Control Federation of America in 1939, and later sought the help of a few black leaders, including pastors, sympathetic to the idea of weeding out the “unfit” in their community.

Sanger wrote that getting ministers onside was important because “we do not want word to go out that we want to exterminate the Negro population and the minister is the man who can straighten out that idea if it ever occurs to any of their more rebellious members.”

Not all 20th-century civil rights leaders were willing to go along with Sanger’s plans, however. Voting-rights activist Fanny Lou Hamer, famous for her declaration that she was “sick and tired of being sick and tired,” believed that abortion was a “genocide among black people.”

In their manifesto, the leaders of Black Lives Matter state that they seek to “disrupt” the “Western-prescribed family”, that they have freed themselves from “heteronormative thinking,” and that they demand “reproductive justice.”