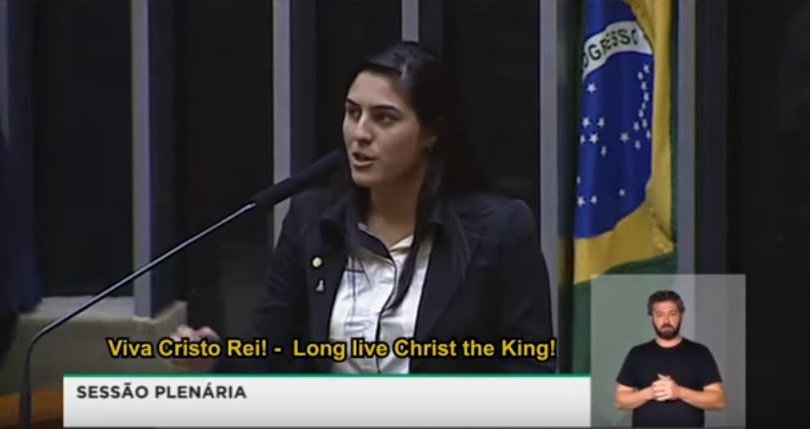 May 1, 2019 (LifeSiteNews.com) — A Brazilian representative elected to the country’s Chamber of Deputies, the lower legislative house, gave an opening speech declaring her commitment as a Catholic to “Christ, the King of the Universe” and ended her opening speech with the cry, “Viva Cristo Rei!” (“Long live Christ the King!”).

Christine Nogueira do Reis Tonietto, popularly known as “Chris Tonietto,” is a 27-year-old attorney and a member of the Dom Bosco Center, a movement that seeks to instill Catholics with knowledge of Catholic doctrine and the practice of Catholic piety, particularly the regular reception of the sacraments. She was elected to the Brazilian Chamber of Deputies last year as a member of the conservative Social Liberal Party, which also nominated Brazil’s current president, Jair Bolsonaro.

“I want to consecrate this term of office, our term of office, to Christ, King of the universe, to Our Lady of Aparecida, Patroness of Brazil, the country that was originally named the Land of the Holy Cross,” said Tonietto to her fellow deputies. “I want to reaffirm here my moral commitment in the defense of life from conception, in defense of the family and Christian values, in the fight against abortion, gender ideology, corruption, and crime.”

“I urge the Brazilian youth not to lose hope in our nation. I want to serve my country with all the love, all the ethical and moral commitment, and the vigor that so inspires my Catholic faith. I wish you all an excellent and blessed term of office, and may God bless our actions here in this legislative house. Viva Cristo Rei!”

The cry “Viva Cristo Rei” (“Viva Cristo Rey” in Spanish) became popular in Latin America and particularly in Mexico during the 1920s and 1930s during the persecution of Catholics by the Mexican government, following the institution of the Feast of Christ the King by Pope Pius XI in 1925. Participants in the “Cristiada” or “Cristero War” that broke out in Mexico in 1926 to defend the Catholic faith regularly used the phrase as a rallying cry.

Tonietto is part of a new generation of conservative Catholic and Evangelical Protestant representatives who were swept into office with the victory of Brazilian President Jair Bolsonaro, who campaigned on a platform of rooting out socialist political ideology from Brazilian government and to replace it with Christian values.

In addition to her uncompromising pro-life and pro-family stances, Tonietto is committed to the overhaul of Brazil’s badly flawed educational system, which under the previous socialist governments has become a system of political indoctrination in favor of neo-Marxist political and social ideology, particularly gender ideology.

“We live in a time in which many people defend and approve, not the respect for religion in general, but the very negation of faith and relativism with regard to the truth,” said Tonietto in a recent interview with the pro-family activist website “Always Family” (“Sempre Família”).

“I am Catholic and I resolved to enter the race for federal deputy. Many times — if not every time — I have concluded my speeches with the resounding cry, ‘Viva Cristo Rei’ for a very simple reason: I am Catholic and, as a Catholic, I defend the restoration of Christendom and I understand that we will only have a true culture of peace if we begin to recognize Christ again as King of our country,” said Tonietto.