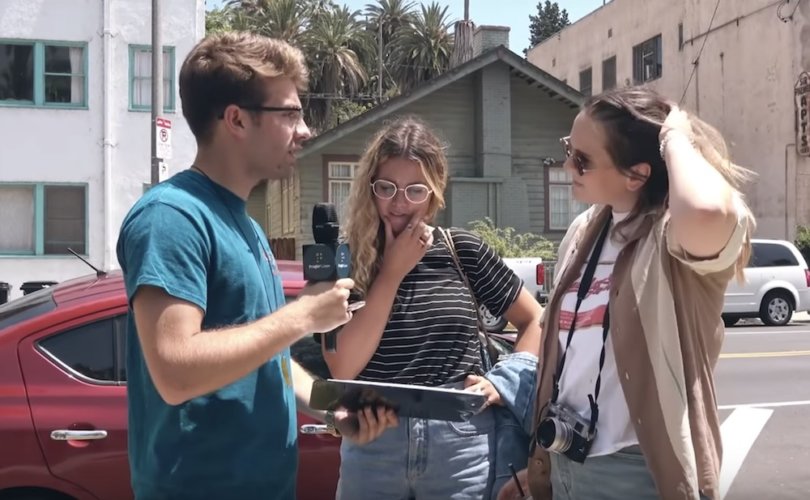 LOS ANGELES, California, September 6, 2019 (LifeSiteNews) – Many on the political Left are passionate about humane treatment of animals while favoring the destruction of preborn human beings, an inconsistency highlighted this week in a new video by Prager University (PragerU).

In the video, PragerU’s Will Witt presents several Los Angeles residents in Echo Park with a petition to protect eagle eggs from destruction (something that is already illegal under federal law). The reactions are uniformly positive, from “of course don’t kill eagles” to “for sure, yeah, definitely” to “I hope you save the eagles.” But those same signatories all change their tune when Witt reveals a second petition advocating the same protection for preborn humans.

When first told about the petition to “stop the killing of humans too, like babies,” respondents initially respond with “oh my God” and “I hate killing of babies,” but once they realize the question refers to abortion, they change to “wait, no, I don’t agree with that…I’m pro-abortion” and “oh no, I don’t agree.”

“Anyone can make their own decision about their body,” argues a third respondent, who joked earlier that she had been drinking. “Babies are gross. You know what it does to your body? You’re not a woman so you’d have no idea.”

“If I wanna have a baby in like 10 years when I fall in love or whatever, like maybe yes I would want one baby, but I would never have more than one because I feel like that’s f***ed up,” the third woman says later. Will interjects to ask, “because of climate change?”

1
Catholic priest openly challenges Pope Francis: Are you a Freemason?
2
WATCH: Pro-abortion protester’s voice becomes ‘demonic’ as he claims to ‘love killing babies’
3
Princess Gloria: Global elites think they do good but actually serve the ‘prince of the world’
4
These pro-abortion moms illustrate the horrors of the culture of death
5
Pope appoints jailed bishop’s canon lawyer to investigate priests who testified to abuse
Subscribe to Daily Headlines »