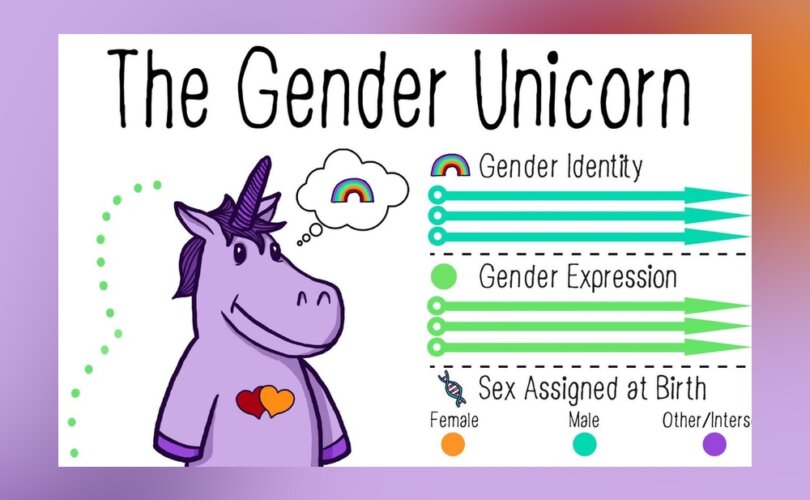 (LifeSiteNews) – A recently unearthed video shows a California teacher admitting to teaching gender theory to students as young as three.

The teacher, Danita McCray, a child development teacher from the Sacramento City Unified School District (SCUSD), admitted to teaching gender theory to her students in a video obtained by FOX News. The video depicts a presentation McCray gave last year at a California Teachers’ Association conference on how to incorporate gender theory into classrooms.

In her talk, McCray recommended that teachers use the “gender unicorn,” a graphic used to teach children about gender theory, which she says teachers can print out. “I thought this would be a great tool that you can use with your students,” McCray said .

“You can download them, and you can talk to them about it. And, of course, it’s age appropriate,” she continued. “And even at five years old, you can ask them, are you a girl or boy? … and you explain that to them. Yes, you were born a girl or boy, but you may not feel that way.”

McCray also admitted to using gender-themed books in class, such as I Am Jazz, a book about Jazz Jennings, a gender confused man who “transitioned” at an early age and had a vaginoplasty at 18. Speaking about I Am Jazz, McCray said “This book is a pre-school aged book, so I’ve actually read this to my class.”

“[My students] absolutely love this book,” McCray continued. “And they’ve asked me to read it. And what I really like about it, it’s so simple. [Jazz] says ‘I was born a boy, but my brain is telling me that I’m a girl.’ And at three or four years old my kids, they say, ‘Oh, okay!’ They understand that.”

When asked if toddlers could understand concepts such as gender and sex, McCray said, “I’ve done research. I have got my doctorate degree. Children are not too young at five years old. Children understand gender as early as three years old.”

— Article continues below Petition —
Stand with Christian daycare worker fired for refusing to indoctrinate kids with LGBT agenda
Show Petition Text
7477 have signed the petition.
Let's get to 7500!
Thank you for signing this petition!
Add your signature:
Show Petition Text

McCray was also asked if her lessons were pushing toddlers into selecting a gender. “The attitude that you set the tone in your classroom depicts the classroom,” she replied. “So in my classroom… There’s no boy bathroom, no girl bathroom. So I already set the tone, and I don’t ask them… do you want to play with this doll? Everything is open to everyone and by everyone to be yourself.”

McCray also said that she doesn’t allow her students to say that certain toys belong specifically to boys or girls. “It’s amazing how the children do that, and they put each other in check about that,” she said. “If they say something… [that] you learn at home. Boys do that, girls do that. But I shut that down in my classroom. I don’t allow the children to do that.”

McCray also declared that she tells parents of her pupils that they have to respect her rules for her classroom, as she would for their homes. However, if parents have an issue with what she teaches, they have the “option to go to another classroom.”

In a statement released to FOX News, a spokesperson from SCUSD said the district “will look into the comments made at a conference and whether they align with district policies, or were made outside the scope of the employee’s duties.” He or she added that school policy “strongly supports the rights of transgender and gender non-conforming students” in order “to ensure the safe and civil environment.”

While addressing parents’ roles in education, the spokesperson said “SCUSD believes parents and families are equal partners in education. We value their contributions and will always work with them to address any issues or concerns they may have with a teacher or other staff member.”

Parents have voiced a growing concern about gender theory in school curricula over the past several months.

Last month, the superintendent of West Chester Area School District in Pennsylvania defended the presence of gender theory in school curricula and hiding students’ “transitions” from parents at a school board meeting.

Also last month, parents at a school board meeting in Dearborn, Michigan voiced concerns about the presence of pornographic books in the district’s libraries. The meeting was shut down because of the overwhelming number of people in the room, which the board claimed was a fire hazard. Dearborn parents informed the district of their intent to sue earlier this week. The district, meanwhile, opted to take the books from library shelves.

In July, Florida’s Parental Rights in Education law took effect. The law prohibits discussions of sexuality and gender theory in K-3 classrooms, and mandates that any discussion on either sex or gender theory above third grade should be done in an “age appropriate” manner.