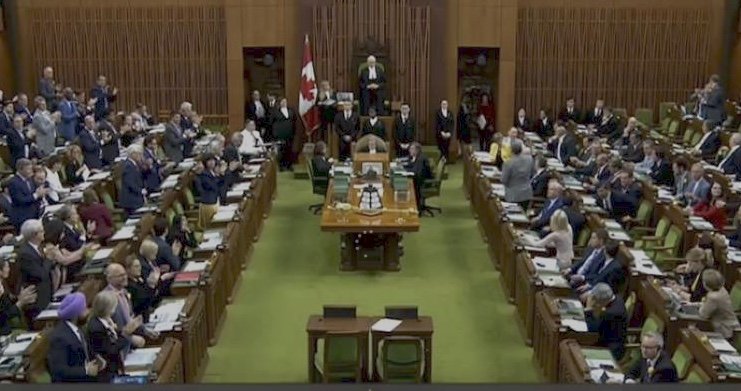 OTTAWA, May 30, 2019 (LifeSiteNews) — All of Canada’s MPs except the Conservatives gave a rousing standing ovation yesterday to a motion affirming a woman’s “right” to unrestricted abortion.

Bloc Quebecois MP Monique Pauze presented a motion that “the House of Commons reiterate that a woman's body belongs to her and her alone and recognize her freedom of choice on abortion for any reason.”

All Liberal, Green, Bloc Quebecois, NDP and Independent MPs in the House thereupon leapt to their feet to clap and cheer for more than two minutes, as Speaker Geoffrey Regan repeatedly called for order over the thunderous applause.

Conservative MPs, however, sat in silence. The only Conservative observed joining the ovation was Sylvie Boucher from Quebec, CTV reported.

Pauze said she believed her motion would get “unanimous consent,” but as it didn’t, it did not make it to the the floor for debate.

“Similar to the cheers and standing ovation that we recently saw in the New York legislature when that horrific abortion law was passed, the majority of the House of Commons celebrating and cheering for the so called ‘right’ to kill a child in the womb, regardless of reason, is shameful,” said Campaign Life vice president Matt Wojciechowski.

“May God have mercy on these politicians.”

Moreover, Wednesday’s spectacle should serve as “wake-up call” to Canadians in the lead-up to October’s federal election, Wojciechowski told LifeSiteNews.

Pro-life advocates must “ensure that they only vote for pro-life candidates,” he said.

Pauze’s motion came as several American states are passing laws giving greater protection to the unborn child. Notably, Alabama passed legislation earlier this month that makes almost all abortions illegal in the state. Heartbeat bills that ban abortion after an unborn child’s heartbeat can be detected have either been passed or are in the process of being so in Georgia, Ohio, Kentucky, Missouri, Louisiana, and South Carolina.

Prime Minister Justin Trudeau responded by accusing the United States of “backsliding on women’s rights” and said he will bring up abortion with American Vice President Mike Pence in their Thursday meeting on trade, CTV reported.

He also included the “conservative movements” in Canada in his denunciation.

“Obviously, I'm very concerned with the situation around the backsliding of women's rights that we’re seeing through conservative movements here in Canada, in the United States and around the world. I will have a broad conversation with the vice president,” he said Wednesday.

Moreover, the Liberals have been fundraising on the abortion issue in the lead-up to Canada’s federal election in October, pointing to the 12 Conservative MPs who attended the National March for Life as evidence the Conservatives plan to change the status quo on abortion if elected.

Canada has had legal abortion for 50 years, and no law restricting abortion at all since 1988, when the Supreme Court struck down the Pierre Trudeau Liberal’s 1969 bill allowing abortion virtually on demand as unconstitutional.

Conservative leader Andrew Scheer, however, has repeatedly stated his party will not reopen the debate on abortion.

Wojciechowski said he hopes that will change.

Campaign Life was “encouraged to see the Conservatives did not engage in applauding the killing of children before birth” in the House on Wednesday, he told LifeSiteNews.

“At the same time, we urge Andrew Scheer and his Conservative leadership to stop cowering to the bullying and intimidation tactics of the radical left – who will never vote for them anyway,” added Wojciechowski.

“The abortion debate is here, it’s always been here. They can either continue to look the other way and ignore the almost 300 children killed before birth every day in Canada, or they can put an end to this 50 years of abortion on demand in Canada.”

Campaign Life Coalition tweeted Wednesday that abortion is very much a ballot-box issue.

WATCH: @liberal_party @NDP @TheGreenParty @BlocQuebecois and Independent members rise in the House of Commons today to applaud a woman’s ”right to choose an #abortion regardless of the reason.” Is this an election issue? You bet it is! https://t.co/AhRAriWw5N #cndpoli

For information on candidates in your riding, go here.