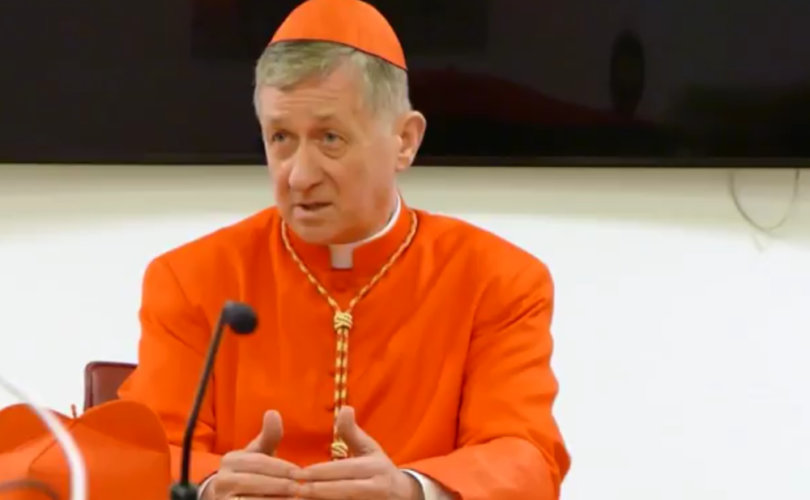 ROME, November 22, 2016 (LifeSiteNews) — Asked by Ed Pentin of the National Catholic Register why Pope Francis won’t reach out to the four Cardinals who wrote the now famous dubia, newly minted Chicago Cardinal Blase Cupich stated that it’s “not for the Pope to respond to that,” adding that anyone who has “doubts and questions” about his teachings needs to “have conversion in their lives.”

“The Holy Father doesn’t have to, in any way, defend a teaching document (Amoris Laetitia) of the Church. It’s up to those who have doubts and questions to have conversion in their lives,” Cupich told reporters on Saturday after Pope Francis elevated him to the College of Cardinals.

The pope’s exhortation, published in April, was to be his magna opus on marriage and the family, setting the course for the Church's outreach to Catholic families. But instead of providing clear guidance for married couples and their families, critics noted how the document contained numerous ambiguities on crucial issues, such as on the indissolubility of marriage, the existence of absolute moral norms, and the role of conscience in making decisions. Those ambiguities lent themselves to being interpreted in ways contrary to previous magisterial teaching.

In September, Cardinals Walter Brandmüller, Raymond Burke, Carlo Caffarra, and Joachim Meisner wrote to the Pope asking him to answer five yes-or-no questions that would dispel what they called the “uncertainty, confusion, and disorientation among many of the faithful” stemming from the exhortation.

Specifically, they asked the pope: 1) whether adulterers can receive Holy Communion; 2) whether there are absolute moral norms that must be followed “without exceptions;” 3) if habitual adultery is an “objective situation of grave habitual sin,” 4) whether an intrinsically evil act can be turned into a “‘subjectively’ good” act based on “circumstances or intentions”; and 5) if, based on “conscience,” one can act contrary to known “absolute moral norms that prohibit intrinsically evil acts.”

While Cupich stated in the press scrum that the document is the “fruit of two synods, and the fruit of propositions that were voted on by two-thirds of the bishops who were there,” Pentin pointed out that the Cardinal’s statement is “misleading.”

“One of them was a proposition relating to the ‘Kasper proposal’ of admitting the divorced and remarried to holy Communion after a period of penitence. That failed to pass. … In spite of this, the Pope controversially broke with custom, which he can do, and authoritatively insisted that all three rejected proposition be kept in the document, thereby enabling them to be carried over into the working document for the Ordinary Synod on the Family the following year,” he added.

While Cupich in the scrum called the exhortation a “magisterial document of the Church,” Cardinal Raymond Burke has stated the opposite, namely that it is “not an act of the Magisterium” but a “personal reflection of the Pope” and therefore not “binding in conscience.”

While some have attacked the four Cardinals as “witless worm[s],” “troublesome,” and heretics and apostates for issuing the dubia, others have spoken in their favor.

Auxiliary Bishop Józef Wróbel of Lublin, Poland, stated that the cardinals were “right to ask for clarification.”

“They have done well and they have exercised correctly the provisions of canon law. I think it is not only a right, but even a duty. It would have been just to answer to their observations. They asked no questions about the next day’s weather, but on issues concerning the Church’s teaching and therefore the faithful,” he stated.