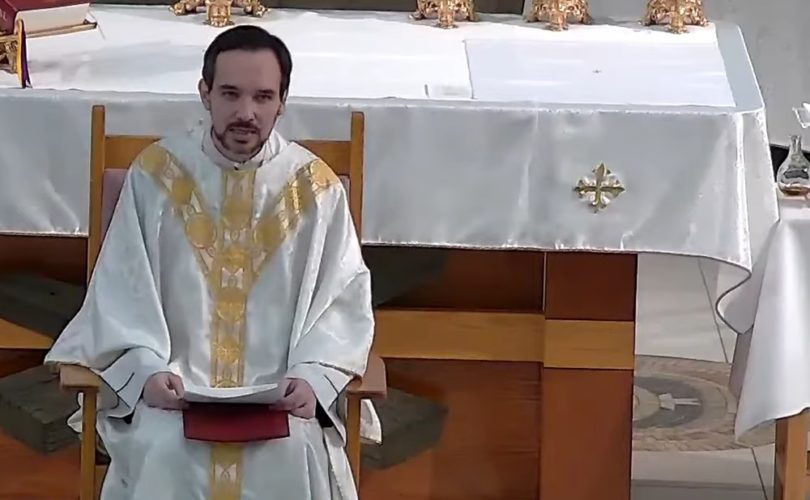 GILBERT, Arizona, April 6, 2021 (LifeSiteNews) — A Catholic priest during his Holy Thursday homily begged the faithful for forgiveness for having left them without the Eucharist during COVID-19 lockdowns the previous year.

“I feel the need to publicly apologize for the events of the past year,” Fr. Sergio Muñoz Fita, pastor of St. Anne Roman Catholic Parish in Gilbert, Arizona, said during his April 1 homily (watch video below at time 1:11:35). “I ask for forgiveness for having left you without the Eucharist for many weeks last year.”

“Many of you, in the most difficult moments of the pandemic, turned to your father for bread, and we gave you a stone. We failed you by denying you the only Food that could sustain your hope. We abandoned you when we should have been closest to you. For this, at this holy Mass, I ask your forgiveness,” he said.

Holy Thursday is the day when Catholics celebrate the institution of the Eucharist by Jesus Christ at the Last Supper. Catholics believe that the bread and wine consecrated by the priest at Mass become in substance the body, blood, soul, and divinity of Christ. Catholics receive the Eucharist for spiritual nourishment. The Church teaches that the Eucharist is the “source and summit of the Christian life.”

Fr. Muñoz Fita, who was ordained in his native Spain in 2004 prior to coming to the U.S. in 2012, and who is a member of the Secular Institute of the Servi Trinitatis, went on to promise his flock that he would never be a party to such a betrayal again.

“What I can promise you is that I will never again be a party to something similar, and that if obedience places me in such a situation again, I will withdraw so as not to be a responsible and guilty party to something that, even today, weighs on my conscience, as the act of which I am most ashamed in my entire life,” he said.

On March 11 of last year, Gov. Doug Ducey (R) had signed an executive order declaring Arizona to be in a state of emergency due to the threat of COVID-19. Four days later, the governor announced a statewide closure of Arizona schools. The next day, March 16, Diocese of Arizona Bishop Thomas Olmsted suspended all weekday and Sunday Masses in the “hope of minimizing the effects of COVID-19.” The churches were later reopened on May 11.

Catholic author Leila Miller, who broke the story on her blog, called the priest’s apology “balm for the soul.”

“Fr. Sergio, a humble, holy priest of God, has said the words that so many of the faithful have waited to hear,” she said.

The priest continued his homily in Spanish, telling the faithful how the Lord must have suffered during the lockdown by being treated “as if he were not important” and being relegated “to the category of things that are ‘non-essential.’”

“I ask forgiveness from Christ in the Eucharist for all that He has had to suffer this past year,” said Fr. Muñoz Fita.

“In the Eucharist we find a living Heart that is sensitive like ours, more sensitive than ours. He has suffered this year from many of the decisions that have been made. We have made Him the target of innumerable offenses, contempt, and disrespect. We have treated Him as if he were not important. We have relegated Him to the category of things that are ‘non-essential,’ when in reality there is nothing more necessary for us than Jesus in the Eucharist. We have alienated the Eucharist from the people who now turn their backs on us because we have turned our backs on them. Christ has suffered in silence in the way we have treated Him, as if He were something we had to protect ourselves from,” he added.

Muñoz Fita concluded his homily with a call for Catholics to take a stand with the Blessed Virgin Mary.

“In these days, let us live accompanying the sorrowful Mother, seeing everything from the watchtower of her Immaculate Heart and begging her to teach us to be like her in loving the designs of the Father and her Son Jesus.”