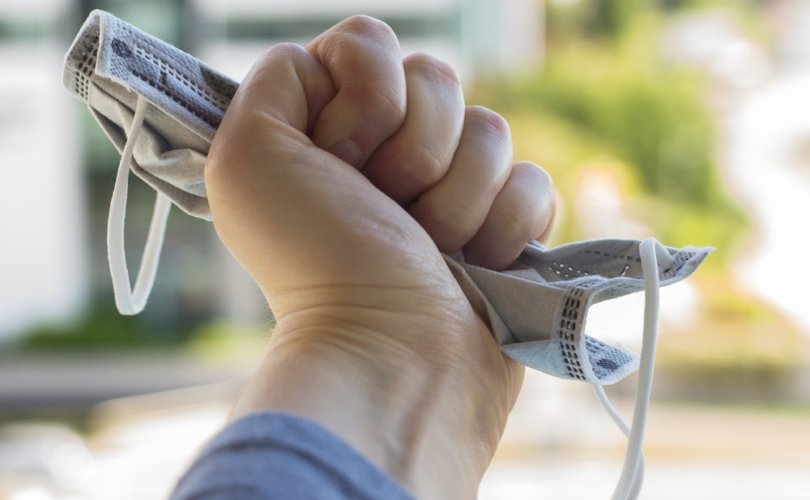 CRYSTAL, Minnesota, September 16, 2020 (LifeSiteNews) — A well known Catholic priest denounced COVID-19 restrictions as “not human” and urged Americans to reject the so-called “new normal” of required masks and social distancing that deepen isolation and fear as “evil” and a diabolical deception.

“The new normal” is anything but, insisted Father Robert Altier, a well known homilist, author, member of the board of Catholic Parents Online, and host of the DVD series Beauty, Truth, Goodness: The fundamentals of Catholicism. His remarks came in a video-recorded homily posted on September 7 on the YouTube page of Complicit Clergy.

In fact, Altier, the parish priest of St. Raphael’s in Crystal, Minnesota, characterized “the new normal” Americans are being asked to accept as diabolically inspired.

Moreover, Fr. Altier insisted, mask and social distancing mandates cause people to be so fearful and isolated that they are reluctant to discuss any doubts they may have about these unprecedented measures or suspicions about who or what might be behind them.

Fr. Altier believes that this is all part of the plan.

“It’s to divide. It’s to isolate. And we’re just going along with it. ‘Oh, this is the new normal. No problem.’  No, this is not even human. It is a problem,” he said.

“Think back six months ago… If you were told six months ago to do what we’re doing today, what would you have thought?” the priest questioned.

Fr. Altier traced the roots of the current problem, saying the indifference of many Americans to unbridled immorality in their midst allowed followers of Karl Marx and Saul Alinsky to push forward inexorably with their agenda.

“Sin is rampant, and most people in America don’t care — a lot of people even rejoice in it. They think that this is great,” he said.

“It is not. It is destructive. It is not only destructive of the individuals who are involved in the sin, but as Saint Paul says, ‘A little yeast leavens all the dough.’ All of us are going to be affected by this, and we are.”

In modern America, that “little leaven in the dough” is the pernicious influence of radicals using the Marx and Alinsky playbooks.

“Little by little, the old frog in the water starts boiling away and just continues to sit there. Here we are,” said Altier.

Even though people may be compelled to comply, they must maintain their independence of thought, he urged.

“And let’s not conform ourselves to the nonsense, because that is what it is,” he added. “Let’s not play their game and call it ‘the new normal’, because it will never be normal. It is not human. We need to be clear.”

Doing this will inevitably mean incurring the wrath of others, even “your neighbor,” warned Altier.

“Anyone who wants to see something different from the narrative is being shut down. The truth enrages these people,” said the priest.

“If we want the norm, and that is indeed what we were created for, it is right in front of you,” added Altier, gesturing to the tabernacle.

The Archdiocese of St. Paul and Minneapolis released a statement acknowledging that it is investigating Fr. Altier for a different homily, this one about coronavirus specifically:

The Archdiocese of Saint Paul and Minneapolis is aware of Father Altier’s homily from last Sunday and has been in contact with him. With the assistance of experts in this area, the matter continues to be under review. Stemming from our belief in the dignity of all human life, the Archdiocese of Saint Paul and Minneapolis is committed to the safety and wellbeing of all people and has consistently collaborated with public health officials and government officials in the development of safety protocols for our parishes and schools. Please join with us in prayer for all those who are sick with COVID-19, those who care for them, and for individuals and families affected in any way by the pandemic. May all we do reflect the compassionate face of Christ the healer to one another.

Fox News reported that Fr. Altier “spent 20 minutes explaining why he believes the COVID-19 virus was manufactured and spread on purpose.”