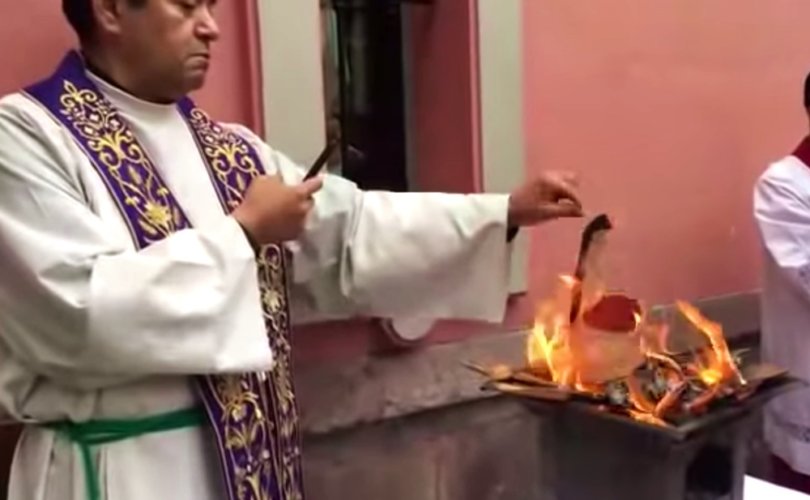 November 4, 2019 (LifeSiteNews) – A Catholic priest in the Archdiocese of Mexico City burned effigies of the pagan “Pachamama” statues while leading the faithful in prayer to atone for the sin of worshiping the statues at the Vatican during the recently concluded Amazon Synod.

Video of the event captured Fr. Hugo Valdemar standing outside a Church dedicated to Our Lady of Guadalupe where flames leaped out of a four-legged metal fireplace that was on top of a table covered with a white tablecloth. The colorized Pachamama effigies were then placed on the table next to the fire.

Fr. Valdemar stood next to an altar boy who was holding an image of Our Lady of Guadalupe and explained what was about to take place, as captured by the November 3 video. The priest was also flanked by an icon of St. Michael the Archangel.

“The most blessed Virgin [Mary] of Guadalupe, as we know, is a young woman who is pregnant. She has Jesus in her womb whom is to give birth to the new continent (the new world). She says that she comes to grant her love to all the inhabitants of this entire continent (not just Mexico). She is pregnant and carries Jesus who will bring us the Gospel and drive away the darkness of idolatry and the devil,” he said.

Fr. Hugo then picked up one of the Pachamama effigies and, holding it next to the image of Our Lady, explained the difference between the two.

“A friend exorcist says that this idol (Pachamama) is actually the figure of the antichrist. It is a blasphemy and parody of Mary. Pachamama is pregnant but carries the antichrist to give birth to him in the Masonic church, to destroy the sacraments, which is to return to idolatry and superstition. So, this antichrist who is to give birth to a church with an ‘Amazonian face’ is an abomination, it is a contradiction to Church doctrine, which is the dynamic into which these idolaters want to enter into now,” he said.

“So, in sign of repugnance to the offenses that they made to the most Blessed Virgin Mary in Rome, in her church of Traspontina, we, as a protest and as a sign of reparation, burn this satanic idol of the Pachamama,” he added.

The priest then dropped the Pachamama into the fire where it was consumed by the flames. Two more effigies were later burned.

The priest then led the people in prayers, asking God for pardon for the offenses committed.

Catholics around the world were outraged last month to see a pagan ceremony take place in the Vatican Gardens where people bowed down to the ground and worshiped Pachamama idols as Pope Francis and other top-ranking prelates looked on. The October 4 ritual, captured on video, shows Pope Francis blessing the pagan statue before receiving it as a gift.

Three cardinals along with four bishops have condemned the pagan rituals at Vatican, calling it “idolatry” and contrary to the first commandment about not having “strange gods.”

On October 21, several replicas of the statues were seized from Santa Maria in Traspontina Church near St. Peter’s Basilica in Rome and thrown into the Tiber river.

Alexander Tschugguel, 26, of Vienna, Austria, revealed November 4 that he was the young man who seized the statues and threw them in the river.

“I saw in those statues and in those idols…a break of the First Commandment,” he said, adding that he was motivated by the desire to “bring pagan things out of a Catholic Church.”