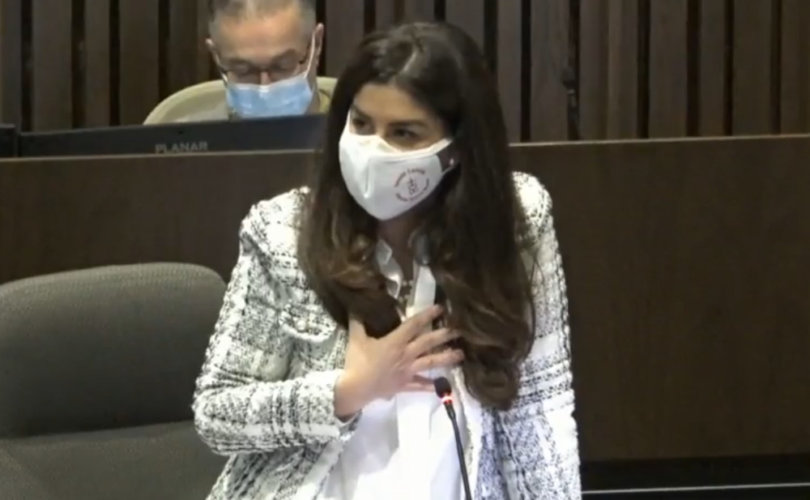 TORONTO, Canada, November 20, 2020 (LifeSiteNews) — Two days after Cardinal Thomas Collins rebuked Toronto Catholic school board trustees and reminded them of their oath to uphold Catholic teaching, a trustee accused unnamed colleagues of “LGBTQ systemic homophobia” and proposed “sensitivity training” for the board.

Trustee Ida Li Preti made her request at Thursday’s stormy meeting of the Toronto District Catholic School Board (TCDSB), during which the cardinal’s private but widely leaked letter provoked debate that yet again highlighted the group’s fundamental division over Catholic teaching on homosexuality and transgenderism. (Click here to read the full letter.)

“I was wondering .. if we would consider sensitivity training specific for all trustees specific to LGBTQ systemic homophobia within the school board,” Li Preti said.

She then reacted angrily when trustee Teresa Lubinski asked if she would agree that a session on “systemic homophobia” be addressed “through a Catholic lens … because that’s what we are about.”

“There is systemic homophobia in this group, right here, we see it,” she added.

“When can I get clarification on trustees that are homophobic?” she asked chair Joe Martino.

“I need to have this clarified. Social media is on that, media is on that, and now it’s here. This is going too far … Now it’s in here, that we’re, some of us are being called homophobic. So what does that mean?”

In response, Martino ruled Lubinski out of order, but when she persisted, he pounded his gavel in exasperation and called for a recess, taking off his face mask and announcing: “I’m not dealing with this anymore.”

When the meeting resumed, Li Preti apologized “if I offended anyone by my use of the word ‘homophobic,’” — but her proposal that trustees receive sensitivity training for being so was adopted.

A night to apologize

It was yet another defining moment for the TCDSB to complement the November 11 meeting during which three trustees objected to a delegate reading the Catechism’s section on homosexuality, on the grounds that, in the words of trustee Norm Di Pasquale, it was “dangerous” and “putting down members of a vulnerable and marginalized community.”

It was this that elicited a reprimand from Collins, who told trustees in a November 17 letter that Catholic trustees preventing a Catholic delegate from reading the Catechism was “reprehensible.”

Collins also reminded trustees of the oath they swore as trustees to uphold Catholic teaching.

As a result of wide dissemination of the cardinal’s letter, Di Pasquale and Martino apologized Thursday for interrupting the delegate. Notably, neither mentioned nor confirmed their assent to Church teaching on homosexuality as outlined in the Catechism.

“I must apologize to the Catholic community for exactly this, for the interruption and how that particular event took place,” said Martino. “And therefore, I would like to further say that, that as trustees of this Catholic institution, we really need to respect everyone.”

“I misunderstood the delegation and that the delegate was quoting from the Catechism of the Catholic Church,” Di Pasquale said, in part.

“I said, ‘I believe the delegate’s comments were treading into dangerous waters, putting down a marginalized community at our board.’ I retract that statement and apologize to the delegate and the Catholic community and trustees for any hurt those words and my actions caused,” he added.

Trustee Nancy Crawford immediately pointed out that the delegate had been quoting the Catechism, added Luetke.

“Yet, Trustee Di Pasquale did not retract his comments, and, in fact, retweeted thanks from an individual who claimed, ‘quoting the Catechism as a means of demonizing the LGBTQ+ community has no place in this meeting …’ There is no room for misunderstanding here.”

The cardinal’s letter also prompted a motion from trustee Michael Del Grande, the reason for the November 11 meeting, which was called to reopen code of conduct complaints that he had been cleared of in August.

This time, eight trustees voted that Del Grande was guilty of violating the code and sanctioned him. He has retained a lawyer and is appealing. Campaign Life Coalition has created a legal defense fund for him on WonderWe, Stand With Michael Del Grande.

Del Grande has been under attack by the LGBTQ lobby and its allies on the board for over a year for the reductio ad absurdum motion he tabled just before the board voted to amend its code of conduct to add “gender identity” and “gender expression” as protected categories.

He then moved that the board consider adding other categories of aberrant sexual behavior, such as pedophilia and bestiality, as protected categories, in an attempt to illustrate the “slippery slope” consequences of amending the code.

His motion Thursday was more straightforward: that staff arrange a presentation to clarify what the trustees’ oath of fidelity means, and the preeminence of constitutional rights of Catholic schools to teach the Catholic faith.

TCDSB trustees are “lacking in understanding and knowledge of what it means to be a Catholic school trustee,” he said.

Del Grande cited as examples that some trustees had claimed the Bible was “outdated” and the board rejected a motion to recite the St. Michael’s Prayer before its meetings.

“It leaves the faithful Catholics wondering exactly what does it mean to be a Catholic trustee.”

Moreover, “there’s a belief that secular proposals are more important than our denominational rights as trustees,” he said.

Trustees “doubling down” on pro-LGBTQ stance

Trustee Garry Tanuan, who urged trustees to “learn more of our faith,” proposed amending Del Grande’s motion to ask that staff prepare for a “root cause analysis” of the Catechism incident.

At this point, Li Preti proposed that “we consider sensitivity training for all trustees specific to LGBTQ systemic homophobia within the school board” — an amendment which passed.

As for Li Preti’s response to viewing this “through a Catholic lens,” this “vague” term is “frequently employed precisely because of its palatability,” but “apparently in Trustee Di Preti’s eyes, even it is controversial these days,” Luetke noted.

“What a fitting example of how far the TCDSB has fallen and the slippery slope all Catholic boards are sliding down in an attempt to preserve public funding for Catholic education at the cost of fidelity!” she said.

The effect of the cardinal’s letter on the TCDSB appears to have been minimal, observed Luetke.

“The letter from His Eminence Thomas Cardinal Collins is appreciated, but it should be obvious that the TCDSB is doubling down in its error, throwing open its doors to the corrupting influence of the LGBTQ lobby, including parroting accusations of ‘systemic homophobia,’” she told LifeSiteNews in an email.

“Greater intervention from the Archdiocese is necessary, lest more of the faithful be led astray.”

She also lauded Del Grande for his efforts.

“Campaign Life Coalition thanks Trustee Del Grande for continuing to go above and beyond in holding his fellow trustees to account and calling them to faithfulness, especially in light of how much he’s already been pilloried for the sake of the Church, the leadership of which has regrettably not been as quick to defend him.” Luetke said.

“As his fight for justice is still ongoing, we would urge readers to donate to his legal fund, Stand with Michael Del Grande, and leave a comment of encouragement, which I know Trustee Del Grande will be bolstered by.”