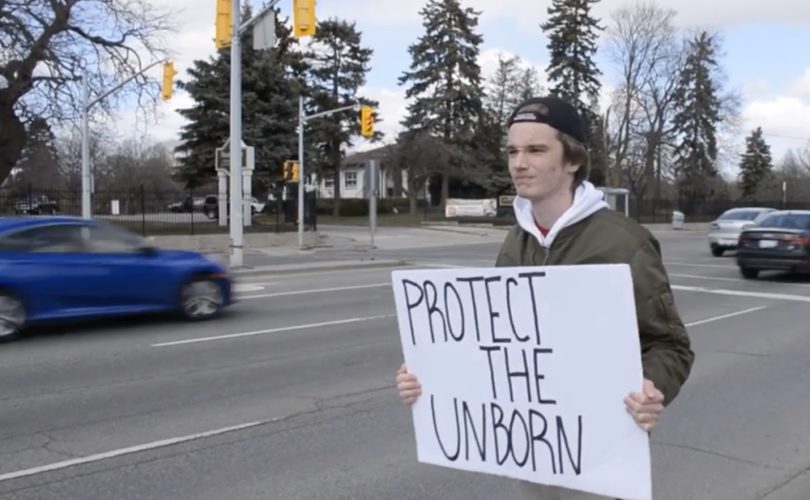 TORONTO, April 8, 2021 (LifeSiteNews) – While COVID-19 restrictions have largely stopped Catholic seminarians at St. Augustine’s Seminary in Toronto from engaging in regular ministries of visiting shut-ins, the homeless, and schools, it has not stopped them from finding new creative ways of continuing to be light and salt to the world, such as engaging in pro-life witness every week on the busy main highway right outside their seminary.

Every Thursday, Myles Vosylius and some of his fellow seminarians stand along Kingston Road for two hours praying and holding homemade signs with messages such as “Protect the Unborn,” “Life begins at Conception,” and “Honk Life.” The group calls themselves Seminarians for Life.

Vosylius, a first-year seminarian, related in a short video he created about the seminarians’ pro-life witness how he attended a 40 Days for Life event recently that touched his heart and opened his eyes to how important pro-life ministry is.

It is “especially the prayer aspect” that is so important in this kind of witness, he said, “to pray for conversion amongst people and to help save lives and save souls for Christ.”

“People need that message,” he said.

Vosylius said that he and a few other seminarians come out each and every week right in front of the seminary to witness to life.

— Article continues below Petition —
PETITION: Reject government control of the internet in Canada
Show Petition Text
6568 have signed the petition.
Let's get to 7500!
Thank you for signing this petition!
Add your signature:
Show Petition Text

Whether or not the signs make any difference is not the most important question for the pro-life seminarians.

“One thing that one can never deny is that there is power in prayer,” said seminarian Peter Bissonnette.

“And so coming out here the most important thing, I think, is praying for all the people who pass by that they may be moved by the message and then God will use the medium that you're using — the message the signs that we're using — to change hearts,” he added.

Vosylius told LifeSiteNews that “seminarians not only should be concerned but need to be concerned about the horrors of this silent genocide taking place in abortion.”

“As Catholics, we are called to proclaim the truth of Jesus Christ and the teachings of His Church, which includes standing up against the evils of abortion. Imagine the responsibility a priest will have all the more in doing this through his ministry. Most importantly, showing the mercy of God in the midst of these sins, in the sacraments,” he said.

The seminarians at times face unpleasant reactions from passersby who do not appreciate their work.

“We get lots of hateful messages thrown at us, you know, people swearing or giving us the middle finger,” said Vosylius. “But just seeing the brokenness in people, you know, we really need to be out there and just be witnessing, lovingly, to a life in Christ and help save lives.”

But the seminarians also get support and even confirmation that what they’re doing is fruitful.

“I’ve had people come up to me and those around me saying, you know, ‘I saw this last year on my way to an abortion,’ or ‘I was pregnant, planning on getting an abortion last year and I saw this and I decided to keep my baby.’ And then she'll show us her son or daughter.”

Vosylius said that the pro-life ministry will be a success if people passing by receive the message that Jesus loves them.

“I just want whoever's watching this to know that Jesus loves you and that I just really hope that in this ministry, people don't see us, but they see Christ, and they can come to a life in Christ, because Jesus is waiting with open arms and calling you by name,” he said.

Vosylius told LifeSiteNews that if he can bring one message to the people of God, it is that “God is in charge.”

“God is raising saints, especially in these crazy times, to save souls for our Lord Jesus Christ. Praise Him and keep your eyes fixed on Him. Christ will bring these horrors to an end, always rely on the most Blessed Virgin Mary and her intercession, remember her promise: ‘In the end, my Immaculate Heart will triumph,’” he said.