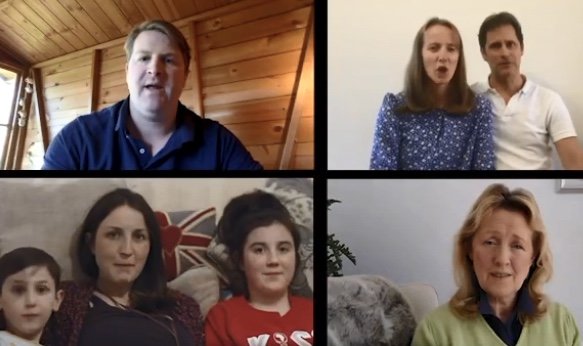 April 24, 2020 (LifeSiteNews) ― A group of British Catholics have released a video in which they beg their bishops to allow them to return once again to the sacraments.

The video, emailed to all British Catholic bishops on Tuesday, is titled “Please Open Our Churches.” It begins with a young woman addressing the British bishops.

“Dear Bishops of England, Wales and Scotland,” she says, “we know this is a difficult time for you as it is for all of us.”

“We are praying for you,” a chorus of children chime in.

“We believe that God’s house should always be open, and that it can be done safely with as little risk as going to the supermarket,” adds a middle-aged man.

In the heartbreaking plea, several Catholics contribute to an explanation that they need to be in close proximity with Jesus in the Blessed Sacrament, even if they cannot receive Him. One woman quotes Pope Francis’ recent worry that online Masses will lead Catholics to live the faith only for themselves, detached from “people, the sacraments, and God.” They promise to maintain social distancing, to make up rotas, spare priests any “extra work,” disinfect the pews, and not endanger elderly priests or any other vulnerable people.

“We appreciate all the efforts to go online with Mass and other devotions, but we want to be more than just virtually with Jesus,” they say. “We know He is waiting for us in the tabernacle.”

Isabel Vaughan-Spruce, who produced the film with Ben and Sarah Thatcher, told LifeSiteNews that she had been approached by Catholics who felt frustrated by the extended church closings and wanted to do something.

“A large number of people were very keen,” she said.

Vaughan-Spruce underscored that the video plea “was borne of a love for the Real Presence of Jesus in the Eucharist and a desire for the Confession to be made available, as well as to show our support for priests and bishops in moving forward safely.” She stressed that the Catholics who took part do not want to endanger anyone and believe that visiting churches, and going to confession, can be “as safely and easily done as entering a supermarket.”

“These are essential journeys that need to be made,” she said.

“We’re creatures of habit,” she said.

Vaughan-Spruce is an organizer of the UK March for Life, but stressed that the video was a project of Catholics, not March for Life.

Pro-life witness Robert Colquhoun also took part independently as a concerned Catholic. He told LifeSiteNews that the principal message of the video is “We can agree to social-distancing and still have confession and open churches.”

Rachel Mackenzie of Rachel’s Vineyard UK also took part in the video. She said she hopes the bishops understand that the laity are their allies.

“We’re on their side, and we want to help,” she told LifeSiteNews.

At the same time, Mackenzie is shocked that the churches are still closed during the national emergency.

“How can we leave God out of this?” she asked. Praying at home is not enough for Catholics: “We believe that Jesus is in the Eucharist.”

“I feel lost, and I am not the only person who feels this way,” Mckenzie said. “Where am I meant to get my strength from?”

She added that the apathy of some Catholics about the locked churches frightens her “more than the coronavirus.”

The Catholics’ video moved the heart of Fr. Henry Whisenant of St. Mary’s Shrine in Warrington, England, who mentioned it in his live-streamed homily yesterday and encouraged Catholics to write to their political and spiritual leaders.

However, Cardinal Vincent Nichols, the Archbishop of Westminster and President of the Catholic Bishops Conference for England and Wales, has warned Catholics not to indulge in “self-pity.”

Nichols made the remark from the empty Westminster Cathedral during a live-streamed Mass “honouring workers in hospitals and care homes,” the Catholic News Agency reported.

“For most of us, our part in this effort is so different,” the cardinal said.

“Yes, deprivations are placed on us, including not being able, as yet, to return to our churches and sacraments, a deprivation we feel very deeply indeed. Yet we beware of any sense of self-pity as we play our part in these life-saving disciplines.”

He hinted that a swift return to churches is not necessary, saying, “In all of this we are comforted by the unwavering presence of our Blessed Lord.”

“We must have eyes to see Him in every place, in every moment,” he continued.

“Our prayer must be steadfast, for there is no doubt that the power of God is both needed and moving in this epic struggle. This evening, we renew that prayer for God’s strength and inspiration for these quiet heroes of today even as we get ready to applaud them.”

Isabel Vaughan-Spruce told LifeSiteNews that Cardinal Nichols’ warning against  self-pity was not “the most understanding thing to say.” She contrasted this remark with his praise for the NHS and revealed that many of the Catholics in the “Please Open Our Churches” video work in the health services themselves. If the cardinal were indeed responding to the video in his homily, it was “presumptuous to think it was prompted by self-pity,” Vaughan-Spruce added.

A very good response from other British bishops

Fortunately, the video has had a good response from other bishops.

“One said he felt ashamed of closing his churches,” Vaughan-Spruce said.

Rachel Mackenzie added that Scotland Bishop John Keenan had responded beautifully to the video by asking Catholics on Facebook how they felt. Keenan stated that he found the video “very moving.”

“We are very grateful to him,” said Vaughan-Spruce.

A spokesman from the Conference of Catholic Bishops of England and Wales told LifeSiteNews that  “steps” taken by the Catholic Church must receive “formal approval.”

“The feelings and desires that are expressed in this video are completely understandable,” he said.

“However, there are other factors that need to be considered: we have a moral duty to protect life; we have a duty to heed the best professional advice about the dangers of this virus which is invisible and deadly; we have to be sure that whatever steps we may take – and some are proposed in the video – are well thought through, receive formal approval and are deliverable in every situation,” he continued.

“Being deprived of sacraments and being unable to enter our churches is a heavy deprivation. Yet we must be clear why it is necessary at this time. When restrictions are eased, we must be ready to act with full responsibility, under public scrutiny and with an eye for the common good of the society of which we are a part.”

LifeSiteNews reached out also to the president of the Conference of Scottish Bishops for a comment and was awaiting a reply.

Public masses were indefinitely suspended in England and Wales after Friday, March 20. The last public masses in Scotland were celebrated on March 19, St. Joseph’s Day. Roman Catholic worship in England, Wales, and Scotland, harshly suppressed during the Protestant Reformation, was decriminalized in 1791.