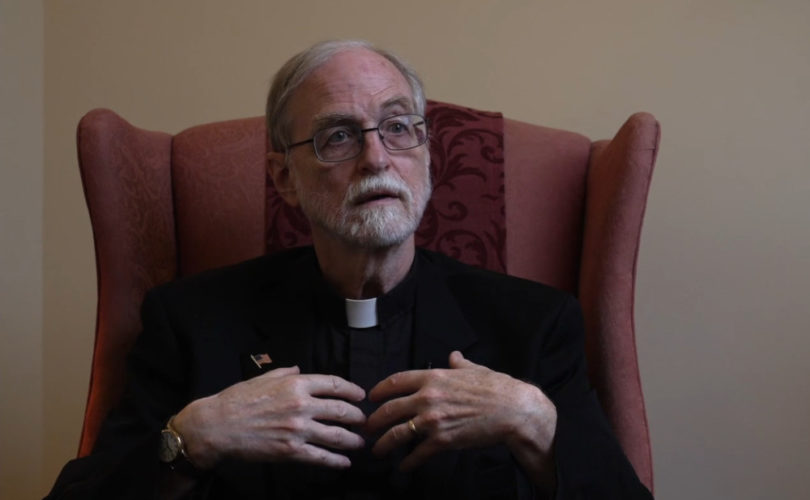 May 26, 2021 (LifeSiteNews) — A pair of recently published scholarly studies challenge the long-held politically-charged notion that counseling efforts to help individuals who experience unwanted same-sex attraction (SSA) are harmful, and may well turn the tide on escalating legal efforts to ban sexual orientation change efforts (SOCE) that have been waged in the past decade.

LifeSite’s Jim Hale talked to Fr. D. Paul Sullins, co-author of one of the studies.

Branded with the pejorative label “conversion therapy,” SOCE have been villanized by special interest groups seeking to bolster the idea that homosexuality is an immutable trait in order to substantiate sweeping changes in laws that have served to erode humanity’s understanding of marriage; allowed a barrage of attacks undermining religious liberty; killed the operation of many Christian social programs, especially adoption and foster care organizations; and justified the purposeful denial of fathers and mothers to a generation of children being raised in same-sex households.

In our current political/cultural climate, the significance of these two studies is stunning, as one of them notes:

Currently SOCE provided by licensed therapists have been legally prohibited for minors in 20 states and numerous municipalities in the United States. Efforts to expand the scope of these bans to include adult consumers and non-licensed religious providers are currently underway.

Universally flawed studies by the psychology profession, until now

The investigative studies conducted over the last couple of decades which have led to overwhelming negative attitudes toward SOCE share a universal commonality: They draw their data exclusively from LGBT-identifying populations. In fact, LGBT-identity is among the “inclusion criteria” for the studies. So anyone with same-sex attraction who does not identify as LGBT would likely be excluded, and yet there is a significant minority of individuals with SSA who do not identify as LGBT, but instead prioritize their religious identity.

Because they have, by definition, been excluded from LGBT studies, their experiences are not represented in the bulk of research, leading to skewed, unfounded conclusions and disastrous, ill-advised legislative and judicial outcomes. And yet, the number of same-sex attracted men and women who identify as ex-LGBT is significant.

A second flaw in the majority of LGBT psychological studies is that they’ve failed to take into account pre-SOCE levels of distress. In other words, researchers failed to ask each participant if they were suicidal before entering counseling to change. The studies only asked “Did you attempt SOCE?” and if so, “What is your suicidal tendency now?”

Learning from those who reject identifying as gay

Two new studies, drawing from populations of men who are same-sex attracted but reject identifying as gay, although based on data collected a decade apart, have generated remarkably similar conclusions by the researchers.

“Sexual Minorities Who Reject an LGB (Lesbian, Gay, Bisexual) Identity: Who Are They and Why Does It Matter?” by Rosik, Lefevor, and Beckstead, published in the Spring 2021 Issues in Law & Medicine found that participants who rejected an LGB identity did not have worse levels of depression, anxiety, and psychosocial flourishing than those who were LGB identified.

“The authors conclude by warning against the assumption that theories and constructs acquired from LGB-identified population samples necessarily generalize to sexual minorities who reject LGB identity,” noted André Van Mol, M.D., in a summary of the study published by Chrisian Medical & Dental Association. “They likewise caution against using studies derived from or dominated by LGB-identified individuals rejecting or alienated from traditional faith communities for crafting laws or advocacy that affect sexual minorities in traditional religious communities. Calling out the tribalization of legal and mental health organizations, the psychologists propose that legal, official, and clinical guidance must be derived from data from population-based samples able to identify non-LGBT sexual minorities or those that deliberately recruit such individuals. Mental health professionals are instructed not to assume religious conservative sexual minorities are harming themselves by rejecting LGB identity.”

The second study, “Efficacy and risk of sexual orientation change efforts: a retrospective analysis of 125 exposed men” by Sullins, Rosik, and Santero, opens up questions about the American Psychological Association’s (APA) 2009 report on “Appropriate Therapeutic Responses to Sexual Orientation.”

“The APA Report discouraged practices designed to facilitate change but fell short of recommending ethical or legal bans on any professional practices,” note the authors. “Given the opposition to SOCE from professional and funding organizations, it is not surprising very few studies since the time of the APA Report have been conducted offering even modest support for change efforts.”

The researchers findings underscore the damage being done by the widespread suppression of sexual orientation change efforts for those seeking to deal with unwanted same-sex attraction:

Prior to SOCE participation, the large majority of married men (71%) engaged in homosexual sex. After SOCE, that proportion plummeted to only 14%, and was only about half as prevalent among the married men as among unmarried men. From the standpoint of the men in the sample, one of the most important indications of perceived SOCE efficacy may be its association with drastically reduced unwanted same-sex activity which conflicts with the religious norms of their marriages.

“On the one hand, our findings are consistent with converging evidence from twin, genome-wide association studies, population studies and narrative reports that sexual orientation 1) is not an immutable genetic trait, influenced approximately twice as much by environment as by genetic inheritance; 2) is observed to be changeable, even fluid, for some over the life course, 3) is reported to change under strong religious influence,” wrote the researchers. “On the other hand, our findings support prior evidence that sexual orientation is not usually or easily changeable.”

“Overall, we found that a large majority of these sexual minority men perceived their engagement in SOCE to enhance their well-being. Less than 5% of participants reported experiencing negative changes,” they continued. “Reports of positive change were stronger and more widely distributed than those of negative change, most strongly for depression, but also for self-esteem, social functioning, self-harm, suicidality, and alcohol/substance abuse.”

The importance of religious faith

A key observation from the study underscored the high degree of significance of religion in the lives of those most helped by SOCE:

The report concludes by pointing out the weakness of the psychology profession’s approach to efforts to change sexual orientation in recent years and the damage done by their unfounded dismissal of those efforts:

The polarization within organized psychology over SOCE appears to have led to insular research that treats one subgroup of sexual minorities as representative of the whole population, with detrimental consequences for accurately comprehending the complexities of sexual orientation change among these individuals.