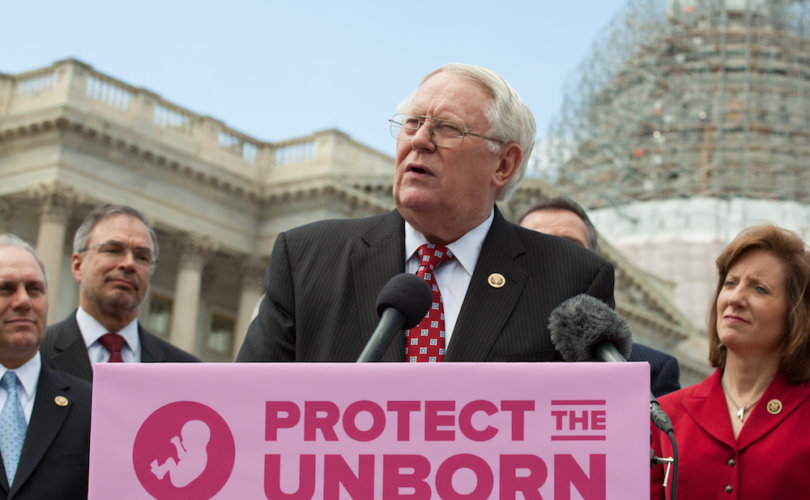 The federal grant recipient 'has egregiously violated our trust,' Rep. Joe Pitts said in a powerful speech on Friday.

WASHINGTON, D.C., April 29, 2016 (LifeSiteNews) – A long-serving pro-life congressman is calling for an investigation into how many community health centers perform or otherwise participate in abortion while receiving taxpayer money.

Rep. Joe Pitts, R-PA, made the demand after an inspector general's report found that six Americorps members illegally acted as abortion “doulas,” giving positive emotional support to women who had abortions, although such an action violates federal law.

On the floor of the House today, Congressman Pitts quoted a statement issued by the National Association of Community Centers (NACHC) in 2010, that said, “Federally Qualified Health Centers do not provide abortions to any of their patients, and we are not aware of any that have ever done so.”

The IFH proudly advertises itself as a federally qualified health center.

“The National Association of Community Centers,” the group that oversaw the Americorps members' activism at the IFH's offices, “has egregiously violated our trust,” Rep. Pitts said on Friday.

“The fact that abortions are performed at these federally funded health center clinics is astonishing. We put our confidence in them as providers of life-affirming women’s health care based on their commitment to not entangle such care with abortion,” he continued.

Congressional Republicans had called for Planned Parenthood's funding to be redirected to community health centers that offer the same women's health services without performing abortions.

Pro-life advocates say that, while most of Planned Parenthood's federal funds do not directly underwrite abortion, they still subsidize the nation's leading abortion provider, and should be channeled to other health care providers that would not present these ethical concerns.

But Rep. Pitts, who is retiring this year, and pro-life Republicans including Rep. Diane Black of Tennessee, have said the most recent report means that funding some FQHCs may present the same concerns.

“We need an investigation into community health centers to determine how many of their clinics are providing for, referring, or performing abortions, and the national association should expel this network of New York clinics from their association,” Congressman Pitts said.

Sources have told LifeSiteNews that, if federal funds were used to pay for such abortions at any community health center, that may constitute a violation of the law, depending on the circumstances.

The Hyde Amendment prohibits the use of taxpayer funds for paying from any abortion except in the cases of rape, incest, or to save the life of the mother. But the Hyde Amendment does not apply equally to every law. Instead, the wording must be added to each and every funding bill separately, creating the possibility of a patchwork system of abortion funding.

The “No Taxpayer Funding for Abortion” Act (H.R. 7) , which would permanently enshrine the language of the Hyde Amendment in all bills, passed the House in January by a 242-179, bipartisan vote. President Obama has promised to veto it.

Both Hillary Clinton and Bernie Sanders support taxpayer-funded abortions at home and abroad.