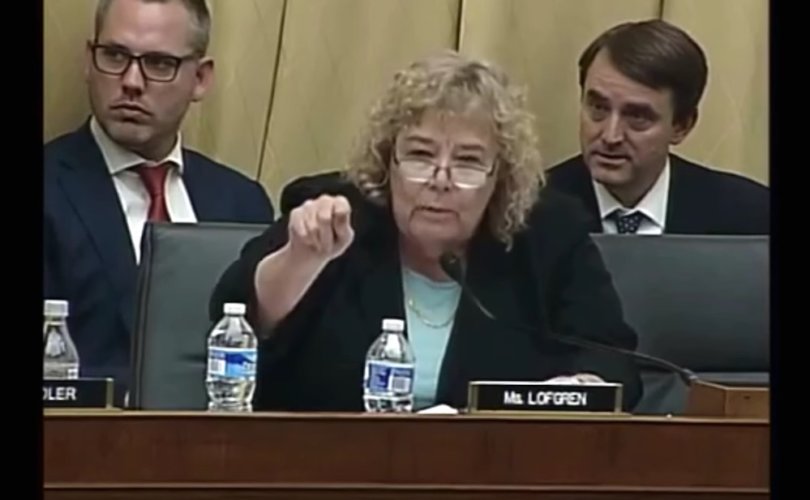 WASHINGTON, D.C., May 27, 2016 (LifeSiteNews) – A California Democrat screamed at a law professor who opposes opening public school restrooms and showers to members of the opposite sex, shouting “You're an ignorant bigot!”

Rep. Zoe Lofgren began by reading a statement submitted by U.S. Civil Rights Commissioner Gail Heriot, who is also a professor at the University of San Diego School of Law.

Commissioner Heriot testified before the committee that an individual's sex is determined by observable biological reality, rather than subjective feelings.

If I believe that I am a Russian princess, that doesn’t make me a Russian princess, even if my friends and acquaintances are willing to indulge my fantasy. Nor am I a Great Horned Owl just because – as I have been told – I happen to share some personality traits with those feathered creatures.

The rest of Commissioner Heriot's written testimony, which quoted philosopher John Locke, traced the legal history of the civil rights statute and found it legally inapplicable in this situation.

Lofgren called the comment “offensive” and said, “I think it’s very regrettable that that comment was put in the record.”

When Heriot tried to reply – saying that the Obama administration's controversial transgender federal guidance is “offensive” – Lofgren shouted her down.

Rep. Steve King, who chaired the hearing, warned Lofgren, “You'll not be recognized to do that.”

Thinking quickly, Heriot replied to Lofgren, “Does that mean you think I am a Russian princess?”

The LGBT blogosphere applauded Lofgren's handling of the exchange.

The Huffington Post wrote that Lofgren “proved she has no tolerance for transphobia.”

Lofgren “showed zero tolerance for transphobia or trans erasure when confronting a witness,” according to the homosexual newspaper The Advocate. The outlet claimed that Lofgren's “zinger” had “ended the conversation.”

“This is what an ally looks like,” wrote the LGBT blog “Joe My God.”

Video of the exchange made Facebook's list of trending news stories later in the week.

Tuesday's Congressional hearing, which dealt largely with the transgender federal guidance, discussed, “The Federal Government on Autopilot: Delegation of Regulatory Authority to an Unaccountable Bureaucracy.”